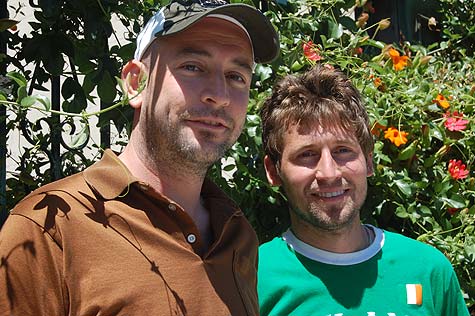 Brendan Jones is a chef with a passion for ingredients, particularly local ones, and that’s a good thing for farmers, food lovers and restaurants in the region: Soon, he’ll open two new businesses that will help bring more local ingredients to all.

The first of the ventures, Lokal, will be a high-concept but also highly affordable new restaurant in what for years was a Carmel Valley breakfast and lunch fixture called the Chatterbox. The restaurant will serve only locally sourced food and drink, and behind a flowering vine-covered gate up the block, it will operate a beer garden complete with Czech-style, locally brewed beers.

But together, the restaurant and its beer garden are just one of the new enterprises that Jones, son of Michael Jones, owner of the Cachagua General Store and A Movable Feast Catering, has ready to go: The second is a much-needed subscription delivery service that will make it more economical and practical for his and other restaurants in the area to buy ultra-fresh and sustainably produced local produce from small family farms around the region.

Lokal is the Czech word for “local,” a nod both to Jones’s intent to source ingredients locally, and to Prague, where he once lived and owned his first bar, Osmicka (“eight” in Czech) with Matthew Zolan, a film and restaurant entrepreneur and partner in the new businesses. Another partner in their new company, called Food, Inc., is Michael Laweurs, a Belgian friend of Jones and Zolan; the fourth is an unnamed film producer.

Jones was on his way to Prague in July when he got word that the Chatterbox had just become available for price he could swing. The plan had been for he and Zolan, who was in Prague with a television project, to scout a new restaurant there and open it. But Jones and Zolan had had their eye on the Chatterbox since last year, and after just a week in Prague, Jones flew back to buy it.

One of the models for Lokal’s atmosphere is Momofuku Noodle Bar, the hip and elegant, yet unfussy New York restaurant founded by celebrity chef David Chang.

What they’re after is “a fun place with great food, very cool and not pretentious,” Zolan said, adding that they’re aiming for a rustic chic that makes no one feel out of place.

To that end, they will install polished concrete floors, indirect lighting and a bar made from reclaimed fence wood. One entire wall will serve as a chalkboard. The partners will give their outdoor patio a European feel with strings of lights and Italian cypress trees.

The inspiration for Lokal’s food, meanwhile, will be the same Japanese and Spanish attention to simplicity and to ingredients that can be seen in Jones’s creations for the Cachagua General Store, like the Wagyu beef tartare with tarragon ice cream.

Rather than putting a lot of ingredients in competition for attention, “I like making one thing shine,” Jones said of his approach.

Jones is already developing new recipes for the venture, including a dessert of black olive clafoutis with tangerine sorbet. Markups on wine will be kept low, and the restaurant will be offering house wines from the Szalay Winery in Carmel Valley.

If all goes according to plan, starting in September, Lokal will be open for dinner Thursday, Friday and Saturday nights. The restaurant will also serve brunch on Saturday and Sunday, and the partners are weighing whether to also offer a full breakfast or an early lunch on other days. Jones will also continue to work with his father at the Cachagua General Store.

Jones, who is 30, started cooking with his father as a toddler, and can be seen chopping food at three or four years of age in a photograph hanging at the Cauchagua General Store.

He said he burned out on cooking at 13, but rediscovered it before was 20, cooking at a Basque restaurant in France.
Later, a four-month stagier, or apprenticeship, at the world-renowned Mugaritz in Errenteria, Spain proved an especially influential experience for Jones.

“It really opened my eyes,” he said, referring to the entirely new ways of thinking about food that he learned in Europe.
For now, however, Jones is excited to be doing his experimentation at home in Carmel Valley.

Lokal will be located at 13750 Center Street in Carmel Valley.