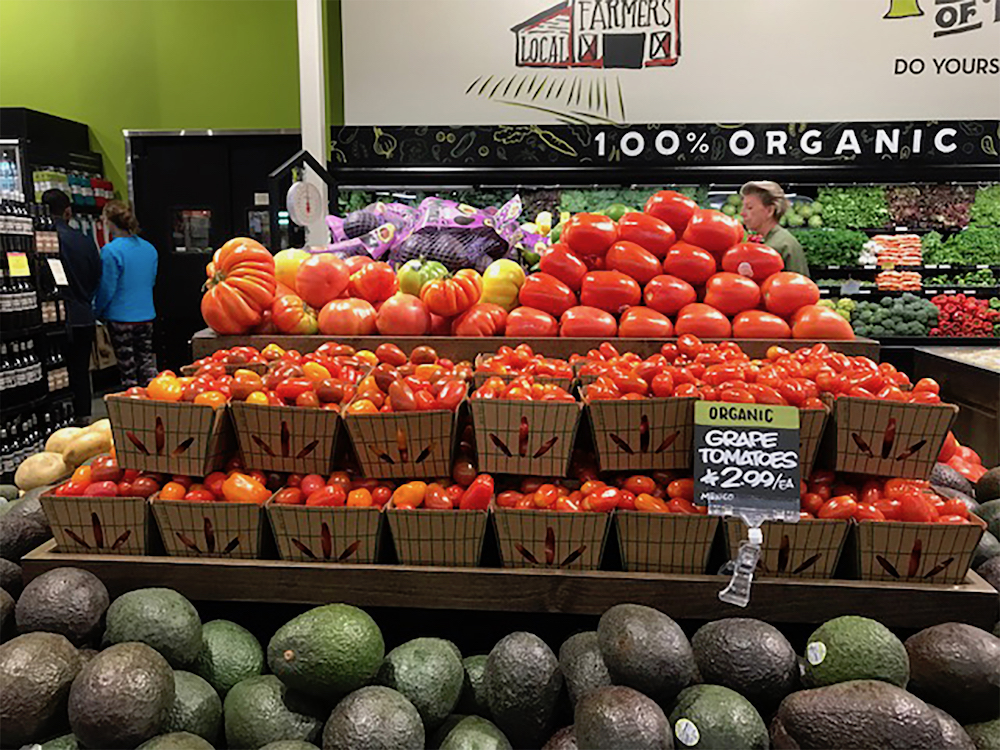 March 17, 2020 – Demand for food, toilet paper, hand sanitizer and other supplies has surged at local markets and grocery stores, as locals stock up in anticipation of staying home for extended periods of time due to the COVID-19 crisis.

Around the Monterey Bay, grocery shelves have been stripped bare at some supermarkets, challenging managers, checkers and other personnel to keep up with the unprecedented demand. Staples such as potatoes, oatmeal, canned tuna, pasta and frozen meals were in high demand; people also continued to seek out cleaning supplies such as sanitizing wipes and bleach.

“We are doing our best to keep everything upbeat and stocked,” says Andre Beauregard, owner of Shopper’s Corner independent market in Santa Cruz. “We are definitely ordering heavier to accommodate the panic buying, and making sure everyone is taken care of, and leaves feeling good.”

Beauregard is in the midst of figuring out new ways to get customers the groceries they need, which could mean grocery delivery or a curbside pickup system, “in response to our customers’ changing needs.”

Other stores are shifting their hours so that there is adequate time to stock shelves and clean and sanitize store surfaces appropriately. Forrest Gonsiewski, vice president of New Leaf Community Markets, says that store personnel are “increasing our usual rigorous sanitation procedures” and working closely with partners to fill out-of-stock items.

A variety of other markets, large and small, have also changed their hours for the same reasons. Giant 24-hour superstores are now closed from late night to early morning. Others are restricting the number of items that people can buy at one time, such as Nob Hill, which was limiting cases of bottled water to one per customer.

New Leaf has temporarily closed its support office so that office staff can work in stores to help stock shelves and serve customers. Other changes at the store level include suspending food sampling, postponing classroom events and closing some store counters.

Personnel generally seem cheerful, although busy. At Star Market in Salinas, owner Victor Kong was working through his lunch hour at the checkstand and didn’t have time to talk; a produce employee at the store declined to give his name, but said, “We’re just trying to keep up as best we can.” Employees were busy restocking shelves even as customers were emptying them out.

Beauregard says that he had recently hired new people for Shopper’s Corner although not in response to the rush due to coronavirus. “We have been staffing heavier and will see how it goes,” he says. “Some past employees who are out of work because of their work closures have offered to come back and help out. I’m sure we’ll take some of them back.”

New Leaf is also letting its shoppers how stores are changing some practices to better protect everyone’s health and well-being. Its response to the virus is posted on the new webpage, “Committed to your Health.” https://www.newleaf.com/stay-healthy/. The page will continue to be updated as the situation evolves.

In Prunedale, the opening of a new Grocery Outlet store was actually held earlier than originally planned. A grand opening with prize giveaways, free doughnuts and a ribbon-cutting was being advertised for Thursday, March 19, but owner-operators Erik Hernandez and Tiffany Humble decided to go forward and open the store two days early, without fanfare. As of 6:30am Tuesday morning, a line had already started to form outside the store, and by 9am when the doors opened, the line was winding around the block.

A shelter in place order was issued for Santa Cruz County on Monday with Monterey County expected to follow suit; San Benito County has not yet made a decision. And, says Beauregard, “I expect that booze sales will pick up this week now that bars are closed.”

With shelter in place now in effect, New Leaf expects the number of shoppers to decrease. Beauregard says things will certainly be different in the short term: “I will miss a lot of my regular customers who are too scared to go out…but I hope they stay safe and healthy, and look forward to seeing them soon.”