Monterey Bay’s own seafood, fruits and veggies are on the rise at Pebble Beach Food & Wine

The Monterey Bay region’s extravagant wealth of locally grown delicacies—like our talented local chefs—have generally played a minor role at Pebble Beach Food & Wine, the massive annual foodie blowout staged by Monterey’s Coastal Luxury Management. But at a special lunch held as part of PBF&W at Restaurant 1833 on April 13, local food played a starring role in a meal that also brought together some of the area’s best chefs.

Thanks to increasing requests by visiting chefs for local, seasonal ingredients, they are also increasingly turning up in dishes prepared by the many visiting chefs that cook at PBF&W, says Mark Ayers, corporate chef for CLM. For the 2012 event, PBF&W’s fifth, Ayers oversaw a team of three ordering staffers and six or seven employees who handled distribution of the four tractor-trailers full of food it took to feed the event’s 8,000 attendees.

And also on the rise, Ayers says, are chefs who chose to fly in ingredients from their own favorite local farmers; what’s decreasing are chefs who don’t care where their ingredients come from, or from how far away, and will take whatever the big food distributors will provide. (Many big events, like many big restaurants, let such corporate distributors choose where to source their products, and often, what they deliver comes from out of state or even out of the country.)

“Five years ago, not many people called up and said, ‘What’s great there now?’” says Ayers, but this year, such rock star chefs as Jacques Pepin, Johnny Iuzzini and Michelle Bernstein all called to find out what was in season locally and planned their orders accordingly. And about 70% to 80% of chefs seeking berries and other fruit are now requesting organic, Ayers says. The local farms the event sourced from included Driscoll’s Berries, Serendipity Farms, Swank Farms and Tanimura & Antle.

“The flavor, the texture, the quality, everything is better,” says 1833’s Mezick of why he himself chooses to source locally whenever he can.

The PFB&W lunch at 1833, which, like the event, is owned by CLM, began with passed hors d’oeuvres including deviled eggs topped with California white sturgeon caviar and Parmesan “baskets” filled with truffled goat cheese. These were decadent and deeply flavorful bites that were nicely offset by a glass of crisp Carmel Road Pinot Gris, but the meal only got better once we were seated, and each dish was spectacular.

First up was Carmel Valley Ranch’s Trejo’s braised abalone, which was raised sustainably by Monterey Abalone Co. Art Seavey, co-owner, gave a brief history of the shellfish, noting that in the 1920s, wild abalone were so abundant that a whole dinner could be had for a nickel. Today, the fishery is closed, and it took Monterey Abalone three to three and a half years to grow the large, fat specimens that were served at 1833.

Instead of being pounded thin, breaded and fried, the abalone was braised to tender perfection, yielding juicy flesh and a slightly smoky flavor. “I like to cook the way I like to eat,” Trejo said, after a guest remarked on how succulent and thick it was and asked about the technique.

True to the winery’s name, the 2010 Chardonnay from Arroyo Seco that La Crema paired with the abalone was creamy with a hint of the minerality characteristic of the Arroyo Seco region. The bright flavor of the fruit was not lost in the richness nor overwhelmed by oak.

Next, Sierra Mar’s von Foerster offered up a roasted poussin (young chicken) atop a five-onion risotto with homemade pancetta.

Von Foerster stuffed the poussin thighs with Swiss chard and foie gras, which added just a touch of richness to the plate. As poussin is not available locally, von Foerster had them flown in from the East Coast. But the vegetables he served were ultra-local, coming from the restaurant’s own Big Sur Garden.

“I harvested all the spring onions” for the risotto, he confessed, noting that the gardener was not happy, but the dish required five gallons of raw onions, which were cooked down to four cups, creating the risotto’s rich flavor. Foraged ramps were also added to the dish, as were morels from Fresno.

The course was paired with a 2009 Carmel Road River Terra Pinot Noir. Individual clusters of grapes were selected for the wine; only 150 cases were produced. It started with a burst of cherry and had a complex finish with overtones of smoke and leather.

Mezick, from 1833, prepared the third course, a grilled rib eye. The steak came from Sun Fed Beef; rancher Matt Byrne explained that their Black Angus cattle are genetically predisposed to turning their natural grass diet into succulent meat. And, in fact, no steak knife was necessary —this was one tender piece of beef. It was served with a delicate gratin of Swank Farms’ Yukon Gold potatoes with clarified butter, sweet young fava beans and a red wine jus, and one of the meal’s most revelatory and unusual additions, a spicy smoked carrot purée.

Two pinot noirs—a 2010 La Crema from Monterey and a 2007 Kendall-Jackson Highlands Estate Pinot Noir from Arroyo Seco—were poured. The La Crema was full of youthful, bright cherry notes, while the Kendall-Jackson was terroir–specific with a taste of minerality and opened up nicely in the glass. The grill smoke in the beef brought out the sweetness in both selections.

For dessert, Marinus’ Ben Spungin drew inspiration from 1833’s ambience and design to create an imaginative—and delectable—riff on black and white.

“Those are the colors that I think about when I think about that restaurant—it’s beautiful and a little haunted,” Spungin said, noting that he also played with the restaurant’s love of absinthe by adding flavors like licorice and star anise to the medley of tiny desserts that made up the course: A sphere of mild star anise “parfait” sat next to a cylinder of slightly tart yogurt mousse and a macaron of black licorice and vanilla meringue. Taken together, the cold parfait, soft mousse, and chewy meringue went a long way to show why, for some, texture is a flavor.

Paired with Carmel Road’s 2009 Riesling, with its bright notes of honey and ginger, the dessert was just the right counterpoint of sweet airiness, show-stopping beauty and inventiveness to round out the meal.

If eating local was appealing before, these chefs raised the bar to a level befitting the annual extravaganza of food and wine it was a part of; we’ll raise a glass of local wine and toast to a repeat next year. 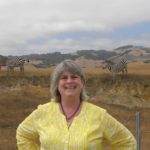