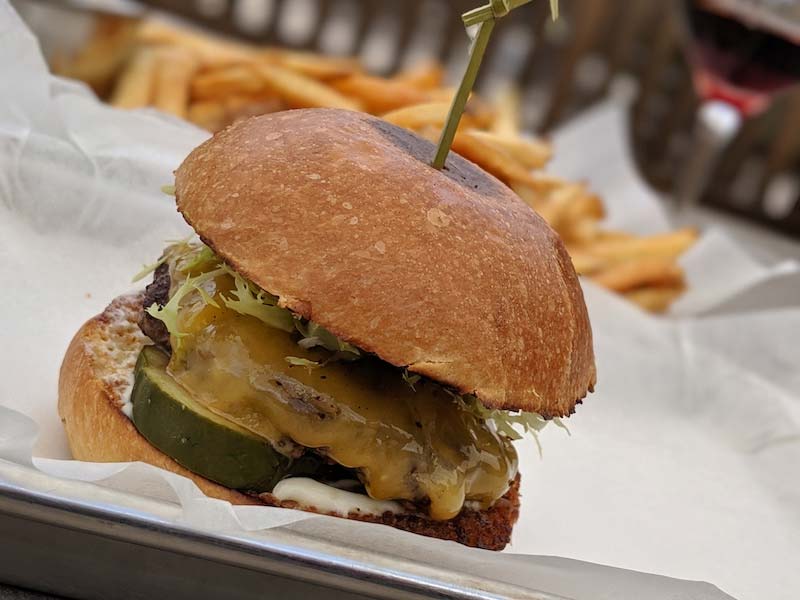 October 22, 2019 – Chef John Cox savors a good challenge, the bigger the better. One year he decided he’d attack the massive amount of water wasted in restaurants by cleaning plates with compressed air. Another time he confronted reeling ocean health by making jellyfish—which in unbalanced waters are proliferating at insane rates—part of his menu. I’ve also seen him shape delicious fried sardine backbones in the shape of scorpions (!) and roast peeled avocados stuffed with sustainable tuna to look like an avocado with its peel still on (!!).

Come to think of it, across a dozen years of food reporting, I’ve yet to encounter a chef quite so resourceful and research-driven.

Surprisingly enough, the most ambitious thing he has taken on was one that seemed a lot easier than taking on crippling drought or ocean crisis: It was a well-funded ranch-to-plate restaurant intended to be a complete ecosystem as much as an eatery. But, ultimately, The Bear and Star in Los Olivos (outside Santa Barbara) shut down much of its operation last week. (Breakfast and limited bar menus may continue through the end of the year.)

That’s meaningful local food news because it frees Cox to spend more time at his Monterey County collaborations, Cultura Comida y Bebida and Cult Taco (and able to take on more projects—more on that in a minute). It’s also compelling food news anywhere restaurateurs and diners strive to be conscious actors, because it delivers hard lessons about where our food systems find themselves in 2019.

Edible Monterey Bay took an extended conversation with Cox, a regular contributor to the magazine, as an opportunity to look at those lessons through the lens of Bear and Star’s closure. (Fortunately the shutdown came after EMB’s visit there this summer for a lunch of pork-fat cornbread, vibrant salads, melt-on-the-palate Miyazaki steak and fresh sorbets all parlayed with a 10-out-of-10 tour of the lush pastures, goat ranch, mushroom caves, farmland and aquaponics just down the road.)

Lesson #1: The economics of eating have shifted tectonically.

Cox: “One statistic I have been thinking about a lot this week is this: In 1900 the average American household spent 43 percent of their annual income on food. Today most families spend just 10 percent. Factory farming has normalized a low-food cost. When faced with a $25 [Wagyu] burger, your average consumer is going to question the cost and value.”

“I can’t applaud the Parker family enough [they own Bear & Star and Fess Parker Winery & Vineyard, among other properties] for their level of commitment and dedication to the local food movement. Many people say they want to support local food and the farm-to-table movement, but very few people are willing to make the investment of time and resources, and the Parker family made a real commitment.”

“One big challenge for us was that we were unable to balance the cost of production with a price structure the market was willing to support. That means that unless something changes, even the current generation of ranchers and farmers in the Santa Ynez Valley and beyond exist on the brink. I’m confident that if we had been willing to compromise our ranch-to-table values, we could have found a formula to make the restaurant profitable. However, given our objectives at the start of the project, abandoning the true local sourcing and production would have been an even greater failure.”

“What happens to a restaurant that advertises ‘wild local king salmon’ and sells farm-raised Atlantic? Nothing. Actually that’s not true—the restaurant sees a surge in profitability, because instead of paying $25 a pound for salmon, they are paying $9. But what if they get caught? Still, nothing. There is much for a restaurant to gain with false advertising and very little to lose. Without penalties and enforcement this trend is going to continue.”

#5: “Whenever possible” is some slippery language.

Menus often include something, per Cox, “along the lines of ‘We pride ourselves in sourcing local, sustainable and organic products whenever possible.’ [That’s] an easy out for an ethical consumer: It means that a diner who feels guilty about eating factory-farmed meat can pretend that her $9 burger is ‘local, sustainable and organic’ because the menu implies that 99 percent of the time it’s true. (It isn’t!) If you are getting a burger in a restaurant that costs between $9-$15 you can pretty much assume that meat is coming from far far away, and it wasn’t happy. Without any marketing restrictions, consumers are misled and trust is lost—why pay $25 for a burger because someone claims it’s sustainable and free range? You can find or make a locally sourced burger for $25, but you can also spend $25 on a burger and have it be far from local.”

“The realities of farming and animal husbandry are harsh. I have seen what I can only assume is the very best case scenario for ranching: Cattle that are lovingly raised on an 800-acre ranch, then—when the grass has died off—finished in a comparatively spacious lot on a diet of spent grains and grape pomace with plenty of shade and water. But I have also looked a cow in the eye before it was loaded up to be driven to the slaughterhouse. FDA bureaucracy meant our happy cattle couldn’t be slaughtered on site (the kindest way, by far).  I’ve witnessed those same happy cows be loaded into a chute, flailing, frightened, and blasted between those soft eyes with a stun gun. It isn’t clean. It isn’t pretty.” Neither are the environmental costs of raising beef.

As his followers on social media know—and perhaps those who track hashtags like #cheftravels—Cox has no problem finding things to get into when he’s not in the kitchen, though that usually leads to others’ kitchens. Recent food-fueled rambles took him across the American South learning barbecue techniques; up to Oysterville, Wash., for (you guessed it) flavor on the half shell; to Mexico City to brainstorm ideas for Cult Taco; and to Thailand and Japan for a deep dive into Northern Thai cuisine and an exploration of the neighborhood surrounding the old Tsukiji Fish Market, respectively. So he’ll be plenty occupied in the near future.

First order of business: spending more time in Carmel and Monterey at Cultura and Cult and re-syncing with his partners Sarah Kabat-Marcy, Michael Marcy and chef Michelle Estigoy.

“The last three years have really given me a whole new level of appreciation for my partners at Cultura and Cult Taco,” Cox says. “Sarah and Michael are both such incredible hospitality professionals and their dedication to service along with their knowledge of wine and mezcal has been instrumental in the success of both restaurants. Chef Michelle is one of the most inspirational chefs I have ever met—not only is she an amazing cook, she has also become an incredible mentor and leader in the kitchen.”

Next order: Enjoy having time off during the holidays, something restaurant pros rarely have, and catching up with family and in-laws in New Mexico and on the East Coast, respectively.

From there he has a few projects in the works that are too recently hatched to publicize, and stands ready to field any and all ideas via john@chefjohncox.com.

“I’m always happy to connect with people about new ideas and experiences,” he says.

Finally, after 15 years writing and taking photos for Edible magazines—from Santa Fe to Hawaii to Monterey Bay to Santa Barbara—he’s ready to start putting fingers to keys on a book about his career-long, self-described “infatuation” with local food sourcing and sustainability, in which I’d imagine The Bear and Star would figure in prominently.

Or maybe the book thing is cover for an opportunity to unplug.

“I have to admit,” he says, “that hiding out in some remote corner of the globe with very little cell phone reception for a few months, while working on a book, sounds very appealing.”