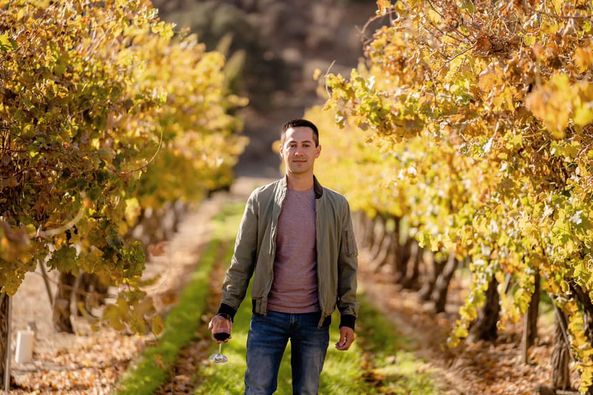 April 20, 2021 – Take a look at the Lepe Cellars label: it’s a striking rendition of a young man kneeling under the heft of a wine cask, much like field workers strain to carry fully loaded baskets of grapes. Akin to the legend of Atlas carrying the weight of the world, a subtle message of pain mixed with confident hope underlies the overt one of strength and endurance. If anything signifies “labor of love,” it is this image.

For a long time now, Miguel Lepe has been carrying around that barrel on his back, waiting for the right place to put it down. He’s finally found it in downtown Carmel-By-The-Sea. Lepe’s long anticipated tasting room there opens, softly, tomorrow, April 21, at the former Scratch location near Caraccioli Cellars. The address is Dolores Street between Ocean & 7th.

Hours this week will be Wednesday through Friday, from 12—7pm. He plans a Grand Opening this Saturday, April 24, from 12—7pm. Please join in welcoming Miguel to his new home!

Inspired by a class at Hartnell College that included a vineyard foray, Lepe went to Cal Poly where he got his degree in enology and viticulture. His first harvest was at Claibourne & Churchill in Edna Valley in 2009, where he picked up many fundamental skills from then winemaker Coby Parker-Garcia. He worked at Sylvester and Justin in Paso Robles, and then had the good fortune to meet Peter Figge, who kept him busy in his Marina winery for 2013, urging Lepe to work an oversees harvest thereafter. Off to Chile he went, visiting Easter Island and Machu Pichu, before returning to Figge’s cellar. Lepe credits Figge with encouraging him to take his personal winemaking from the “just for fun” stage to obtaining his bond in 2015. A successful crowdfunding effort resulted in him making his first commercial vintage. And now, finally, he has a tasting room of his own.

Come toast the occasion with a glass of one of Lepe’s unique and diverse lineup that covers the gamut from a creamy orchard fruit laden Chardonnay from Carmel Valley to a lovely 2016 Riesling from Arroyo Seco to a spicy, savory Petit Verdot nicely. Not many people choose to bottle Petit Verdot solo, but Lepe loves the complexity of this dark varietal from the Merit Vineyard in San Antonio Valley, the southern reaches of Monterey County, where big reds thrive. He also makes a Zinfandel from Wellong Vineyard in San Antonio Valley: he says the 2019 is a bright red cherry, cinnamon and plum pleaser with a nice kick of white pepper. Zin without pepper is like peppercorn cheese without the peppercorns.

A particularly appropriate way to celebrate would be with the 2020 Sparkling Sauvignon Blanc from the Zabala Vineyard in Arroyo Seco. It’s a Pétillant Naturel, called “Pet Nat” by the oeno cognoscenti.  Pet Nat is the oldest known way of making sparkling wine. Instead of the traditional Champenoise method, in which sugar and yeast create a secondary fermentation, Pétillant Naturel is a single fermentation in which yeast are trapped in the bottle, creating natural bubbles. The clouds stuff at the bottom is the expired yeast. They did their job, so honor them well and pour them into a garden plant. The cycle of life goes on.