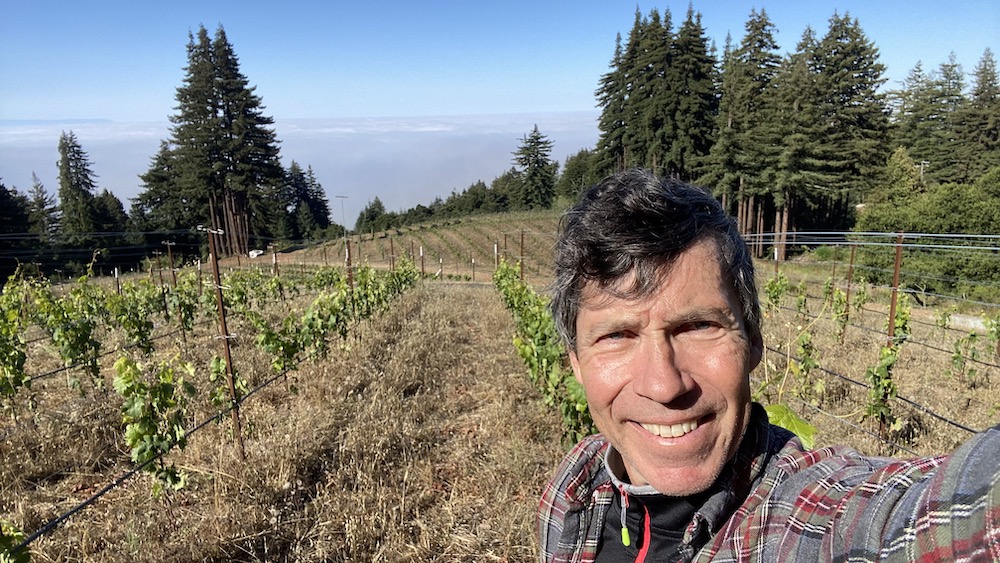 July 23, 2021 – The pandemic caused a lot of people to reassess their entire lives, often in wholesale fashion. Among them were the two men who founded Left Bend Winery back in 2010. The venture began as a hobby vineyard when Gary Robinson planted vines in his backyard in Los Gatos in 2008. One turn led to another and in 2010 Left Bend Winery was founded. It’s named for the slight left bend in the San Andreas fault that formed the Santa Cruz Mountains.

Gary Robinson met Richard Hanke while cycling the winding roads of those very mountains, and soon they realized they shared a passion for wine, and more importantly, a passion for wine made from the many small vineyards that dot our region. Richard joined Left Bend as co-owner in 2013. Gary was in charge of the cellar and winemaking, while Richard handled the business and the tasting room, which is located in Los Gatos, and is set to close at the end of July.

Eleven years and a pandemic later, the two have decided to go in clearly different directions: in this case, east and west. For Hanke, it’s west to Watsonville and for Robinson, it’s east to Colorado. The Left Bend brand will live on, albeit in a slightly different delivery format.

“Covid changed a lot of things,” says winegrower Richard Hanke. “Basically, Gary and his wife, who works in high tech, decided that if her job could be done from anywhere, why not move back to Boulder? They’d lived there before about

15 years ago and loved the outdoor life in Colorado.” The pandemic created the perfect storm of opportunity.

So everything about Left Bend had to shift. First, the tasting room they’ve had in downtown Los Gatos will be closing at the end of July. Wine production will likely move to Silver Mountain, on San Jose Soquel Road, where custom crush is already done for several local labels, including Tony Craig’s Sonnet, Muns and Gali, all of which list Craig as the winemaker of record. The grapes will be coming mainly from the newly planted estate vineyard Hanke purchased last year called Redwood Grove. Left Bend had previously purchased grapes from several local vineyards, including Gali.

For Hanke, it won’t be too difficult a trek to bring grapes from his newly acquired vineyard in Watsonville, which is near Mount Madonna Park, to Silver Mountain. Hanke says the 20-acre parcel, which is at 1500 ft. and steeply sloped, is mostly unplantable, but the bits that are have a southwest exposure and a stunning view of the Monterey Bay, all the way to Santa Cruz.

“There’s a house on the property, which is great!” says Hanke. “It allows me to get an early start on this huge garden project! We decided to plant 7 varietals to start, and see what works. We may have to do some grafting. We have Chardonnay, Pinot Noir, Syrah, Cab Franc, Merlot and Tempranillo.” He wonders if it will be warm enough for Cab Franc, which happens to be planted at the lower part of the vineyard, closest to the coast, and the fog.

Hanke loves Riesling and wants to plant that here as well. “We’ve been getting Riesling from the Redwing Vineyard near Hecker Pass. People are always expecting it to be sweet, but it’s totally dry. The vineyard was planted in the 1970s. We wanted to get budwood from it, but it turns out the vines are diseased.” So, they planted rootstock last year and hoped to graft onto it, but the vines were too puny, so they will wait until next year. Patience is such a virtue in farming.

Everything about the vineyard project makes Hanke smile. He’s never sounded more enthusiastic, and he’s an optimist by nature. “I am so happy to be outside!” he says. “I really love the farming part and it’s good to be in the vineyard. I’m farming organically and I’ve had no real problems so far. The Tempranillo is going crazy!” He admits the Cab Franc appears to be struggling, but it’s been a very cool spring and summer so far.

Hanke will host club members at the Redwood Grove Vineyard whenever new releases are rolled out. Club members will be informed of the upcoming releases, and will be able to schedule a timeslot to visit this spectacular spot. “We have several amazing redwood stands on the property. They are just so beautiful!”

And so, despite Covid, and perhaps because of it, Left Bend will live on, in a view-endowed spot, dotted with old redwood groves that provide shade as well as shelter.

Some go east; some go west. A new adventure awaits around every bend.

2019 Morgan Twelve Clones Pinot Noir, Santa Lucia Highlands ($35) – This is always a go-to when we need to recommend a local pinot noir that will prove a crowd-pleaser. From five of the famed SLH vineyards, including Double L, Boekenoogen, Rosella’s and Tondre, this is juicy, silky and eternally red raspberry, framed by aromas of fern, porcini mushrooms, slate and a hint of tar. The complexity of the nose and the palate does not get in the way of its smooth, supple and lively red-fruited delivery of snappy red cranberry, red raspberry and red plum. The acid is pitch perfect and the tannins, like air kisses.

2019 Morgan Tempranillo, Riverbank Vineyard, Arroyo Seco ($25) – Do you enjoy a complete departure from the norm of Pinot Noir and Bordeaux varieties on occasion? Especially when you’re grilling lamb with lots of rosemary and garlic, cooking pork with a plum sauce, or roasting Andouille sausages, eggplant and peppers? This is solid, standup Tempranillo, with aromas of sweet plum sauce, exotic spices and warm cherry pie, delivering oodles of grilled Damson plums, roasted balsamic marinated figs, and cherry turnovers with cinnamon and red licorice. Fit for a feast, no matter the menu, but ideal for zesty and diverse.

2018 Morgan Double L Vineyard Pinot Noir, Santa Lucia Highlands ($65) – When it comes to pinot noir, this certified organic vineyard at the northern end of the SLH bench delivers big on spices and depth, carrying off that feat of supremely savory, to the point of white pepper, dried herbs and cardamom, melded with the warm generosity of dark cherry and cola. With 40% new French oak, the structure is enhanced but never remotely dominated by the wood. In fact, the oak presence appears mostly in the aromas of warm biscuits and scones. A sheer delight to drink with its ultra satiny tannins and free flowing acid, this is like red raspberry truffles and Linzer torte, with a melted milk chocolate finish. A most excellent, elegant pinot noir, fit for duck confit or game hens stuffed with truffled wild rice and raisins.