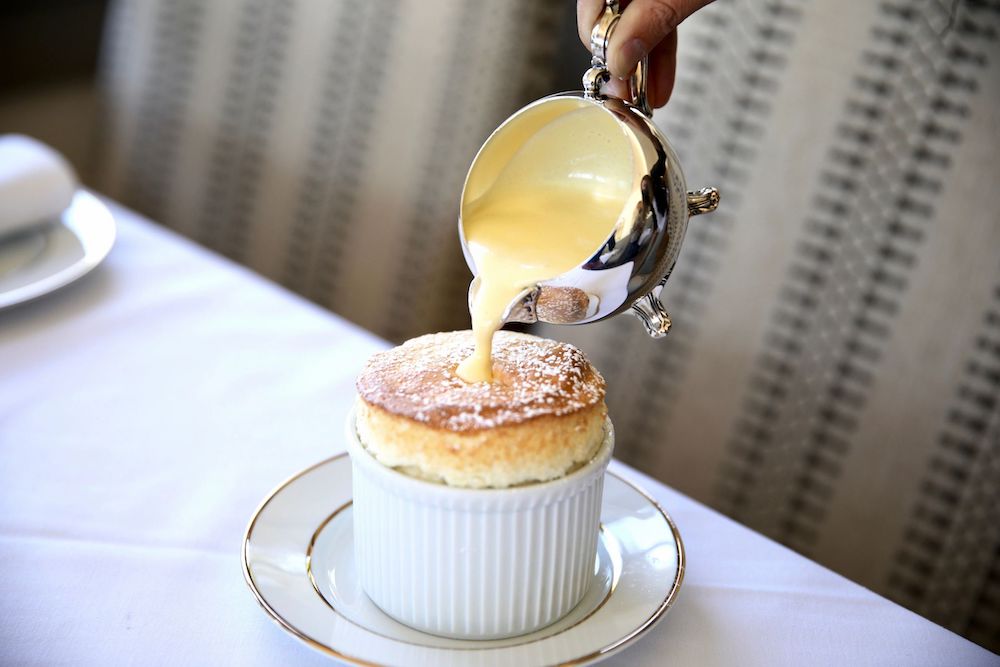 September 8, 2020 – A soufflé is a famously fickle dish. Most chefs agree achieving a perfectly puffed soufflé is an art. It’s a dish that can’t be rushed and patience turns out to be the most important ingredient.

Lisa Foreman knows a thing or two about patience. For more than 20 years, she’s dreamed of a cozy cafe that specializes in soufflé.

Foreman has been in the hospitality business—restaurants, hotels, catering and events—since she was 16 years old growing up in San Rafael, California. “I was one of those teenagers that always had my Zagat book with notes and highlights for places I’d been and places maybe someday I could go to,” she recalls. One spot grabbed Foreman’s attention more than others—Cafe Jacqueline.

Jacqueline Margulis’ namesake cafe is a fixture of San Francisco’s North Beach neighborhood. It opened the same year Foreman was born and as a teenager, Foreman always dreamed of dining here when she was older. Those dreams came true when she got engaged to her husband, Tyler, and the pair became regulars at the romantic restaurant. “It’s where my love for soufflés came from. The experience was so intimate with the reveal of a beautiful soufflé,” she recalls. “It’s so romantic, it’s really special,” Tyler adds.

Those intimate meals inspired Foreman’s dream for a spot of her own, “I knew that I wanted to open a small space of my own someday.”

But why specialize in soufflé?

It wasn’t just her own passion for the dish, but a desire to highlight something unusual. “Soufflé is something that’s very new to some people. Maybe they’ve tried chocolate soufflé, but the traditional French soufflé restaurant is a very new concept,” says Foreman. “These days, there are very few cuisines that are brand new to people. We’re not just a French restaurant, we’re kind of a unique place.”

Foreman had to be patient with her plans for opening a small soufflé spot.

Like the perfect soufflé, the ingredients started to come together three years ago when she and Tyler moved to Carmel. Their three kids now old enough, she felt the time was finally right to bring her vision to life.

Foreman was prepared to be patient in finding a chef partner, but just six months after moving to Carmel, she met Ivan Samchenko.

“It was fate! The first person I talked to, it was a perfect fit,” she explains. A bite of lamb at an event cemented Foreman’s culinary connection to Samchenko. “It was at a catered event, a casual event,” Foreman recalls. “I thought, ‘Who does an exquisite lamb at a casual event like this?’ The temperature, the presentation, the taste—everything was spot on. I said, I’ve got to figure out who this person is!”

Samchenko was born in Ukraine, and immigrated to New York City in the 90s. After studying computer science and working in computer programming for a number of years, a “life-changing” camping trip inspired a dramatic shift in career, “A friend of ours had just started cooking school and said she loved it. I’d always loved to cook and my wife said, ‘Why don’t you try that?’” he recalls. Three days later, he signed up for culinary school.

After completing his studies, Samchenko went on to work in New York City’s Chanterelle and Union Pacific restaurants. But he grew tired of kitchen politics and the long hours that kept him from his family, so he moved into catering for high-end events and worked with the Union Square Hospitality Group, which operated renowned restaurants like Eleven Madison Park and Gramercy Tavern.

Eventually, he and his family relocated to California. After wowing Foreman with that bite of lamb, he joined the team and began R&D for the new soufflé spot. “We spent two and a half years working together and perfected 17 soufflé recipes. We’ve dialed in what we loved,” says Foreman.

Asked about the secrets to a perfect soufflé, “That’s classified!” Tyler jokes. Samchenko reveals lessons he’s learned over the past two and half years perfecting the restaurant’s recipes. “They’re temperamental,” he says. “Egg whites have to be warm, the albumens need to break down to build those bubbles and the sugar is the stabilizer, with cream of tartar to keep hot air in the bubbles.” He’s proud of the restaurant’s signature soufflés, but confesses sometimes along the way, yes, there were flops.

With the menu dialed in, Foreman began her search for the right location. She knew she wanted a small spot, not just for the romanticism of serving soufflé but the practicality too—executing a delicate dish requires time and juggling a large dining room would be a recipe for disaster.

Scrolling through real estate listings late one night, Foreman discovered the former Friar Tuck’s location at the corner of Dolores and Fifth was available. Finally, after a year of searching, she found the right spot for the restaurant. “A lot of people thought I was crazy!” she recalls. “They knew what we were trying to create, and I think it was hard to visualize it in this corner spot that had been a diner for so long.”

The lease took effect in February and construction began soon after with plans for a grand debut in the summer—but then the coronavirus pandemic hit.

Construction ground to a halt—but Foreman remained patient. She spent April securing new subcontractors so work could resume once restrictions eased in May. Remarkably, construction wrapped in mid June and the restaurant seemed on track for opening just as indoor dining returned in early July.

Of course those plans flopped when the state put Monterey County on its coronavirus watch list and indoor dining was suspended again. Soufflé can’t be served to-go and just building the restaurant had been challenging enough, “The thought of creating a new [outdoor] space, well, we weren’t there yet,” she confesses. “If you’ve already been open and people know who you are and then you open up an outdoor space, you’re not building your reputation on just that. For a new restaurant though, this was it. We had to see if it was worth that risk.”

Foreman waited for a few weeks to see if indoor dining restrictions might be lifted, but when it became clear outdoor dining would be the restaurant’s only option for the foreseeable future, she began planning for a parklet. “The city was really great, immediately approving us for a parklet on the side,” she recalls. “They approved us for two parklets, actually, but we only did one since we knew taking more space in front of the post office would be a hard thing for the community.”

Le Soufflé finally opened for service just ahead of Labor Day weekend. “It was like [snaps] quick, build and here we are,” she says.

And of course there’s rack of lamb with braised aubergine and roasted summer tomatoes—Samchenko’s signature dish had to be on the menu.

A vegan prix fixe is also available by request. “Our chef’s family is vegan, so he feels strongly that when you dine out as a vegan, it’s sometimes hard to find something that is as good as everything else on the menu,” explains Foreman. There’s no formal menu for Samchenko’s vegan fare, “It changes every day. He decides what he’s going to do in the moment.”

“Our wine program here is just as new and unusual as our food menu because it’s so small and so focused,” Foreman says. “I worked with fabulous distributors to source from small, boutique producers in France and you can find some amazing French wines at really reasonable prices.”

The 20 or so selections are all available by the glass if you’d like a taste without committing to a full bottle. In time, the restaurant will serve local wines too, rotating through a featured winery each month and spotlighting one or two selections at a time.

So after a bit of patience, Foreman is excited to unveil Le Soufflé and bring a taste of Paris to Carmel. C’est magnifique.