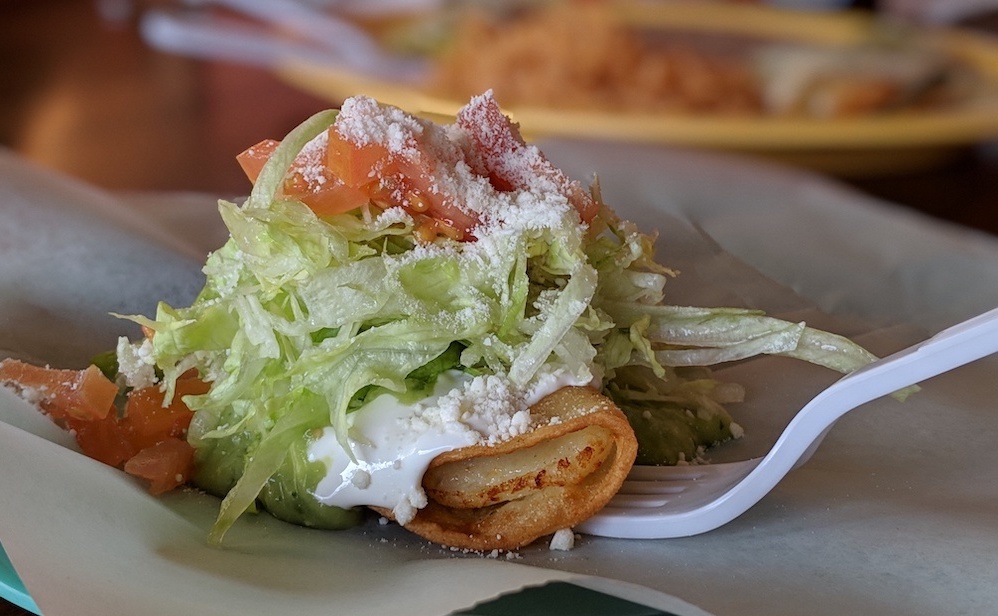 Don’t get me wrong. I love a deconstructed cashew-cranberry-duck confit tamal or squid ink micro seafood chimichanga as much as the next guy.

But there is something to be said for a Mexican restaurant concerned less with inventiveness or Instagram imagery than doing its job with straightforward menu items, fair price points, quality and consistency—a place that checks all the boxes in an approachable way with enthusiasm for service.

The next box checked is an indicator of what’s to come: Thinner-style tortilla chips that are freshly fried, ungreasy, and piled in a sizable bin. That bin sits next to tongs, baskets and a salsa bar stocked with fresh pico de gallo, avocado sauce, zingy red and green chili pepper salsas, spicy pickled carrots, radishes and lime wedges.

“Something fresh until the food comes,” says co-owner Francisco Arango, though it should be noted the food arrives fast.

Arango worked at Santa Lucia Preserve in food service for two decades before teaming with partners and longtime Papa Chano’s Taqueria stalwarts Hector de la Rosa and Lupe Barajas, who serves as chef and designed the menu around his abuela’s recipes.

The menu is thorough, with a touch of Americanization: breakfast burritos and huevos rancheros; meaty burritos five ways with a choice of seven proteins; tostadas and ceviches; plenty of tacos; house specialties like chile verde, menudo, shrimp cocktail, a carne asada plate, and a three-filet tilapia platter; combo plates with nothing over $10.25; popular fajitas; sopes and grilled torta sandwiches; sizable nachos and carne asada fries; giant super quesadillas; a vegetarian section with six options; plus agua frescas and fresh orange and carrot juice.

“What we do is homemade from the beginning [of the preparation],” Arango says, citing fajitas and the bistec ranchero. “That’s our priority.”

The plates EMB tried reflect that pride, and the success Cazuelas had at the original spot at 3156 Del Monte Blvd. in Marina, which opened in August 2018.

“We are kinda in the perfect location for Marina and Seaside, in the middle of [each] city,” Arango says. “But we get a lot of people from Pacific Grove and Carmel.”

Baraja’s experience opening more than a dozen taquerias across Jalisco, Mexico, and Northern California helps too.

The carnitas hard-shell taco benefits from a handmade fried flour tortilla, shredded and seasoned pork, crisp shredded lettuce, guacamole and a surprisingly pleasant dusting of parmesan cheese. The tacos dorados de papa are an old-school Mexican treat for vegetarians. The chile relleno (stuffed with Monterey Jack cheese) is spot-on, the enchilada (with chicken and both red and green sauce) combo plate with rice and beans textbook.

Nothing necessarily spectacular, simply solid. To eyes and ears trained by modern click bait to bite on the sensational, that could sound like an indictment. It’s the opposite. As plenty of food hounds understand, much of the world’s best food is simple. (See sidebar, below, for more outstanding Seaside simplicity.)

In other words, the best town for Mexican this side of Salinas has another keeper.

Yes, the Internet can be helpful, which is why you won’t be needing addresses for these flavorful destinations from us. That aside, it says something that almost all of them thrives old-school style, no website needed. (Listed in alphabetical order.)

Rolled tacos • Baldimero’s Taco Shop • No website • 2008 Fremont Blvd., Seaside
The north Seaside institution is the best in the vicinity at crispy rolled beef tacos served with a pile of shredded lettuce and a pool of avocado salsa.

Al pastor taco • Mi Tierra Supermercado (taqueria in rear corner) • No website • 1000 Broadway Ave., Seaside
The seasoned al pastor pork, dripped with pineapple juice and shaved from the traditional trompo vertical spit roaster, is so good I once wrote a 800-word review/love note dedicated entirely to it. Bonus: The first time I got the chorizo quesadilla “super” here it was a mistake that I decided to eat anyway. I have ordered it every visit since.

Cheese enchilada • Jose’s Mexican Food • Jose’s Mexican on Facebook • 1612 Del Monte Blvd., Seaside
Just about anything with the enchilada sauce would suffice at this locals institution (my plan is to ask for it on a wet carnitas burrito or vegetarian chimichanga). Also the only restaurant on the planet with El Jefe Nitro Margaritas on tap.

Carnitas taco • Taqueria Zarape • Taqueria Zarape on Facebook • 1107 Fremont Blvd., Seaside
This place might be the Simone Biles of the group, being the best in several categories (including shrimp tacos, fish tacos and carne en su jugo soup). But the carnitas are the simplest and most above and beyond the rest of the field, generously portioned and done with a recipe the team won’t share, but likely uses Coca Cola or Dr. Pepper in the prep.