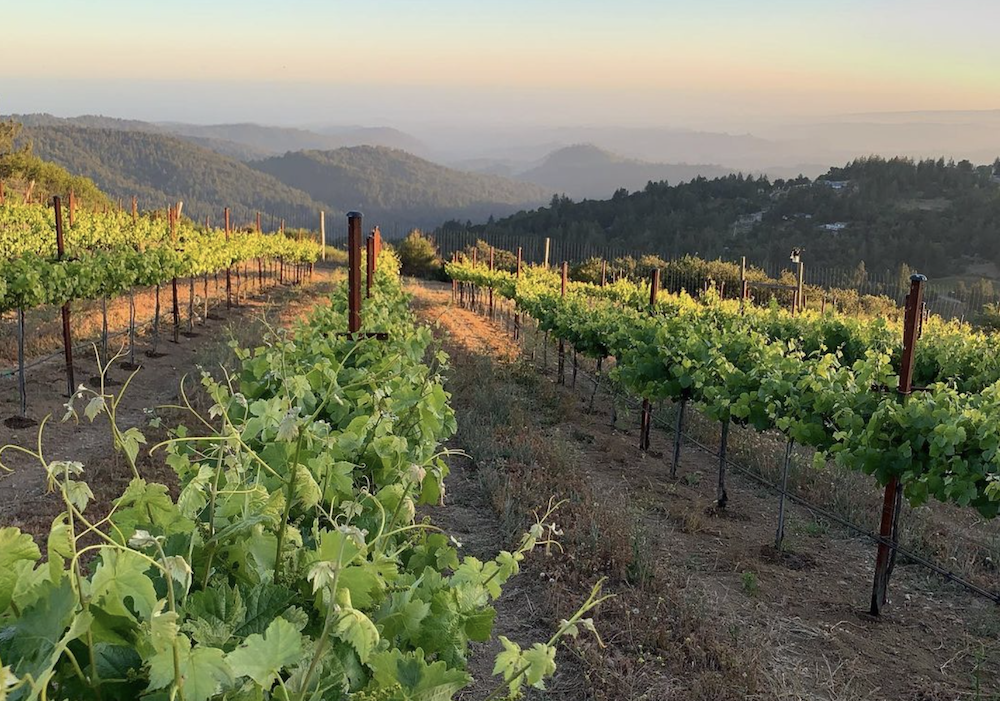 July 2, 2021 – Blame it on Peter Bargetto’s fascination with the grapes of his ancestors who hail from Piemonte, Italy. Or blame it on a quirky obsession of one local viticulturist, Prudy Foxx, but there are Nebbiolo vines thriving in the Santa Cruz Mountains. On a quest to visit them, vineyard owner Mark Porter and I stopped to admire a little lily-padded lake. This lake is more than a water source, it’s an historical namesake.

High up on Loma Prieta Avenue, just a few miles past Wrights Station Vineyards & Winery, is a 12-acre vineyard named for this tiny lake discovered by Spanish explorers. They named it Lago Lomita, which roughly translates to Lake of the Low Broad Hill. Porter tells me the name appears on all the USGS maps of the area that he’s seen. It catches rain runoff: remember rain?

Once upon a time, Mark and his wife Robin’s youngest son, wakeboarded here. You can see the remnants of that pastime, now abandoned. How many hobbies are cast aside, along with all the toys and props needed to support them? In fact, this 44-acre property was once home to a vineyard that was originally planted in 1983 and then left to wild.

Wild is a verb here in the rugged mountains. Land once cleared and tamed, when left alone will wild again. Wild cannot be stopped, just kept at bay. Mark says it was a jungle.

They began a massive clearing of the 44-acre property in 2013, involving backhoes and tractors and the expertise of a Watsonville-based land engineer. After the year-long effort, the Porters began planting their 12-acre vineyard, with the help of Foxx, beginning in 2014.

Robin bought the property in early 1990, after the Loma Prieta earthquake. She figured land up there near the San Andreas faultline would be a good deal and besides, she needed an escape from her crazy high tech world. Truly, the ambitious among us just trade one kind of crazy for another. She built a treehouse, 44 feet up in the redwoods, to get away from her kids. It’s now one of the most popular Air BnB rentals, booked solid with engagements, elopements, searching for the meaning of lifers and full moon lovers. They also have a glamping tent, which is also tremendously popular.

The Porters live on property, in a beautiful home overlooking a block of Pinot Gris, with the Monterey Bay as a backdrop. Orderly rows of Pinot Noir, Cabernet Sauvignon and Cabernet Franc climb up the hilly slopes on the western side, and plantings of Nebbiolo and Sangiovese sit, along with some Pinot Noir, on the eastern side.

We walked among the Nebbiolo vines, trained with their canes in graceful arcs, so stunningly different from the manner in which the other varieties are pruned. They looked like lyres, awaiting the arrival of Orpheus.

Mark says they weren’t sure about the idea of Nebbiolo at first. “Prudy said she’d failed at growing this variety at a couple of other sites, so we thought, ‘do we want to risk this?’ It took awhile for the Nebbiolo to mature, but it seems to really love this site. Given that we’re almost always above the fog in the summer, we’re able to give it all the sun and degree-days that it needs, along with the cool evening winds blowing across the top of the fog layer in the evening. Seems to be ideal for Nebbiolo.”

The proof is in the bottle. The 2019 Soquel Vineyards Nebbiolo from Lago Lomita Vineyard won a Best of Class at the 2021 San Francisco Chronicle Competition, vaulting it into notoriety. It exhibits a lot of ripe red cherry, red licorice and candied apple, and is fairly dense in its garnet hue.

Winemaker Peter Bargetto was clearly thrilled to find this fruit and to make something that resonated with the judges. “Wait until you taste the 2020!” he says. “Even more fruity.”

Bargetto explains that in 2019, he picked at 24.4 Brix, but went a bit riper with the 2020, which came in at 25.1. “The 2020 vintage of Nebbiolo is aging half in one-year-old barrels and half in new Gamba barrels. This wine is elegant and refined, with a rich mouthfeel and has enough depth to create warmth and creaminess.”

He says they’ve been doing egg white fining trials, and will add four egg whites per barrel prior to bottling, followed by racking and filtration. “One filtration will be enough to protect the integrity of this wine. The structure is solid and it’s a wine built for the cellar. It will be bottled later this year. Aging potential 2022—2030.”

The Porters just planted another 2 acres of Nebbiolo, bringing them up to almost 3.5 acres total of the grape. They now have two clones of the variety and are looking forward to seeing what Bargetto, who currently gets their entire Nebbiolo crop, can do with it. They also recently planted another four acres total of Cabernet Franc and additional clones of Pinot Noir, including clones 667, 115, Mount Eden, Swan and 828.

As for the rest of their fruit, most of it goes to Soquel Vineyards and Wrights Station. Dan Lokteff makes a Pinot Grigio and Cabernet Franc as a Lago Lomita vineyard designate under the Wrights Station label, as well as a blend called Semaphore Red, which includes their Sangiovese. Under their own label, Lago Lomita, Lokteff also makes Pinot Noir and Nebbiolo. You can purchase the wines on their website and at the Summit Store.

Foxx continues to scout for other sites in the Santa Cruz Mountains that might be ideal for Nebbiolo, the grape whose name is derived from the Piemontese word for fog. She’s a real devotee of the grape and she’s not alone: Fogarty Winery has two sites planted to Nebbiolo, one at the estate where the winery is located and another at Gist Ranch, on Skyline, between Gist and Black Roads. From the latter, winemaker Nathan Kandler makes a Nebbiolo that echoes all the hallmarks of Piemonte renditions: roses, violets, tar, tobacco, cherries and earthy truffles, with pure rose-amber clarity, and a slightly brick orange rim in the glass.

Here’s to more Nebbiolo in the mountains. Let’s face it, we already have plenty Pinot Noir.

SAVVY SIPS OF THE WEEK

2019 Beauregard Oeuf en Béton Pinot Noir – You wouldn’t expect a winemaker to do pinot in concrete, unless that winemaker is Ryan Beauregard. Talk about a fantastic experiment. Similar to the Oeuf en Béton Chardonnay, which is the luscious essence of Chardonnay uncluttered by oak, this pinot simply charms from the pink rose petal color to the lipsmacking finish of cherry pastilles. It’s a rose garden of delight in the nose, with cedar, juniper and forest floor. You would be fooled into thinking it’s a rose, but this is pure pinot, with red currant, raspberry and blood orange flavors, carried along by a relentless river of acid. And yet, for all its bright acid, the cherry candy keeps it lively and alluring.

2013 Kings Mountain “Bacchus” Pinot Noir – At a wonderful SCMWA wine dinner held at Armitage Winery, former home of Heart Of The Mountain in Scotts Valley last Sunday, I had the privilege of pouring two pinots from Kings Mountain in Woodside. The 2013 Bacchus, a mix of Clone 13 (Martini) and 667, can best be described as a bar brawl. It’s big and brawny, with tons of blackberry fruit, baked plum and apple galette. It’s wild and vivacious, looking for trouble, and finding it at every turn. This 2013 isn’t going to calm down for decades, so you can buy a lot of it and be sure it will outlast you, as long as you don’t drink it first.

2013 Kings Mountain Clone 13 Pinot Noir – As big and savory as the Bacchus is big and fruity, the Martini clone pinot exudes earthy raspberry, tobacco and rum cherry aromas. It simply dazzles with its silky smooth palate that deftly blends tomato leaf, basil, cherry raspberry bars, brownies and beef broth. The complexity of the wine speaks to the sincerity of the older clones of pinot that are anchored in depth and earth, and create long lasting wines that fill the mouth with stories, not sound bites. Both these wines can be purchased from the website. KMVShop VinoCruz also carries some vintages of Kings Mountain pinots, as well as their Meritage.