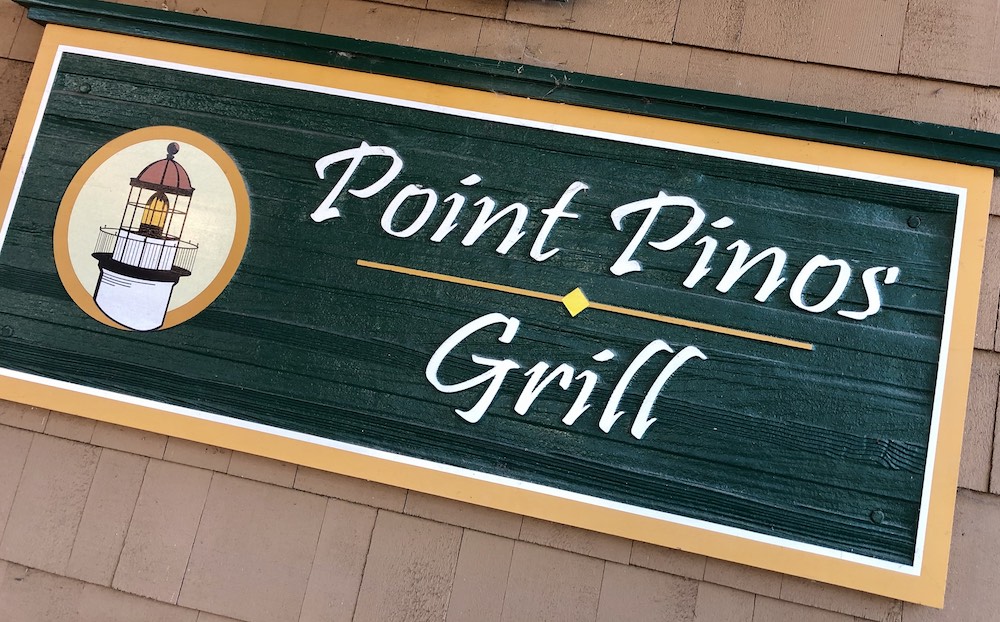 October 13, 2020 – While most were glued to their televisions last Wednesday for the vice presidential debate, many local foodies turned their attention to their computer screens instead. They logged into Zoom and eagerly awaited resolution on a different sort of debate that’s swept Pacific Grove politics—the future of the Point Pinos Grill.

Discussion of an ordinance approving a lease agreement with La Crème Hospitality, Inc. had been on the council’s agenda since August. What should have been a procedural vote turned into anything but, thanks largely to impassioned posts on social media over the past two months.

The news that Pacific Grove was approving a new concessionaire for Point Pinos Grill—the restaurant and clubhouse at the city-owned Pacific Grove Golf Links—surprised many.

The eatery overlooking the greens and the big blue beyond had a shaky history engaging locals. Its previous operator, Aqua Terra Culinary, enjoyed favorable press coverage, but its Yelp reviews revealed dissatisfied locals and impatient golfers. When the coronavirus pandemic forced the temporary closure of the golf course, Point Pinos Grill seemingly slipped from memory like the ebbing tide.

In a video posted to Instagram, she announced Crema’s surprise closure—she’d been unable to secure rent reductions to offset the drop in business during the pandemic—and news that she was seeking approval to take over culinary operations at Point Pinos Grill. Crema’s loyals shared sympathy for the closure and excitement for Aceves’ reimagined The Grill at Point Pinos and local media—including Edible Monterey Bay—amplified the news.

Representatives from Ardent Culinaire—current operators of the Point Pinos Grill—chimed in to clarify that contrary to the “Sorry, we have closed” notice emblazoned on the restaurant’s website, they were actually still open for business. (Edible Monterey Bay regrets previous reporting cited the erroneous closure notices on the restaurant’s website and Google listing and perpetuated the misconception that the eatery had shuttered.) Ardent Culinaire staff alleged sabotage from the previous operator and bias against its bid to continue operations at Point Pinos Grill.

A far more complex story turned out to be lurking beneath the surface.

The city awarded Ardent Culinaire a temporary month-to-month contract for operations at Point Pinos Grill and began the RFP (request for proposals) process in March to formally seek a new long-term concessions contract for the eatery.

CA Catering Services was a new operation established in April 2020. Inexperience quickly disqualified it from the running. Proposals from Ardent Culinaire and La Crème Hospitality were given the most attention. City staff ultimately awarded their coveted recommendation to La Crème Hospitality and sent their endorsement to the city council for approval.

But what should have been a straightforward signoff by the city council became a dragged-out debate.

Review and approval of the concessions contract appeared on the council’s agenda three times—August 19, September 2 and September 16, each time bumped due to time constraints and continued to the next meeting—before finally landing for council consideration on October 7.

When it was clear that La Crème was the frontrunner, some vocal advocates pleaded to give Ardent Culinaire a second chance, while others urged swift resolution to help La Crème Hospitality start its next chapter.

Point Pinos Grill’s regulars grew frustrated as they saw Ardent Culinaire sidelined from consideration, despite improvements to food and service and booming business for outdoor dining. With the decision postponed time and time again, locals took to social media to criticize city staff’s recommendation to award the contract to La Crème Hospitality.

Posts on NextDoor questioned how a restaurant owner struggling to pay rent at an existing location could have the financial backing to open a new operation—especially so soon after opening Lucy’s on Lighthouse, co-owned by Aceves. Former Crema employees alleged poor labor practices and struggles to pay staff on time. Amateur sleuths dug up public records that showed the California Employment Development Department had placed 14 tax liens on La Crème Hospitality, raising eyebrows about Aceves taking on new projects.

Councilmembers noted the abundant emails and letters of support—as well as the ongoing social media chatter—they’d received from both sides as they began deliberations at last week’s meeting.

Public comment included Ardent Culinaire employees urging the council to reconsider their bid. Ardent Culinaire’s president, Cheyenne Diaz, outlined the challenges her company faced with resilience—an unprecedented global pandemic, bank repossessions of equipment and furnishings during service and a website held hostage that falsely claims the restaurant is closed—and pleaded for further consideration. “COVID threw us a curveball, but we continue to hang on—please give us a fair chance,” she said.

Estevan Jimenez—executive chef for Rancho Cielo’s Drummond Culinary Academy, 2019 Chef of the Year for the American Culinary Federation’s Monterey Bay Chapter and one of Ardent Culinaire’s co-owners—underscored the local roots of the hospitality company and the team’s extensive experience in the restaurant industry.

Their pleas seemed to especially resonate with Councilmember Jenny McAdams, who empathized with Ardent Culinaire’s struggles during the pandemic, “They haven’t really been provided a fair opportunity to show us what they can do. So far, they have shown us they can pay rent on time, they can pay their employees in full and they can pay their vendors while providing good food and good service.” She also expressed concern at terminating Ardent Culinaire’s current lease agreement and leaving employees without work, “I cannot support something that’s going to kick a bunch of employees out.”

Councilmember Garfield advocated for respecting the process, “We have a robust process for an RFP.”

She worried personal preferences were clouding objective review of the city staff recommendation and underscored the need for swift resolution. “I don’t think we want to start a precedent where council weighs in on which is their favorite menu,” she said. “Going forward there are no guarantees in anyone’s success in being able to run a restaurant, but holding this off and constantly delaying it adds to the uncertainty.”

Smith agreed, “The staff has done this analysis and the staff has vetted the opportunities. I have to trust the staff that they’ve done their job and selected the best opportunity for the city to make revenue and bring in a unique business.”

As the council prepared to vote, that focus on revenue came under further scrutiny. On paper, La Crème Hospitality’s lease agreement appeared more generous than Ardent Culinaire’s bid. For its first year, La Crème Hospitality would pay a rent of 4% of gross sales receipts, while Ardent Culinaire’s bid proposed a higher rent of 8%. When asked why the city would award a bid that generates less revenue, City Manager Ben Harvey clarified the criteria for reviewing bids, “It’s important for the council to know the driving decision wasn’t simply on revenue.” He referred to La Crème Hospitality offering a “superior proposal” based not just on projected sales revenue, but offering a “high-quality experience.” This was met with skepticism as too “aspirational” and “intangible” criteria by Huitt and Peake, respectively.

For now, Ardent Culinaire continues operations at the Point Pinos Grill while awaiting official 30-day notice its lease has been terminated by the city.

“I’m very flattered and honored by how much support we gathered,” says Ardent Culinaire president Cheyenne Diaz. She’s appreciative of patrons—including many new customers—who have come in to support her team.

Diaz doesn’t look forward to laying off her 15 employees, when the city does give official notice. “That’s the part that’s the most sickening,” she says, but she’s optimistic about the future for the fledgling food company, “I’m confident we’ll find our next stop and make it work.”

In the meantime, Diaz welcomes locals to savor one more meal at Point Pinos Grill, which is open for takeout and outdoor dining, plus grab-and-go options for golfers, from 7:30am to 6pm daily. See menus below.