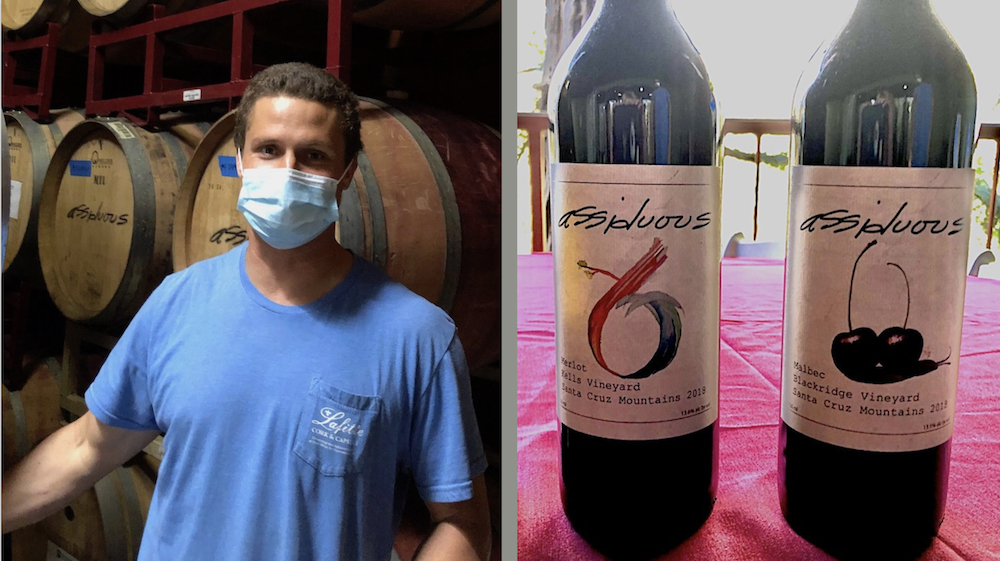 March 19, 2021 – If you don’t know the name Keegan Mayo, consider yourself introduced. This unassuming young man has a surfer’s ease in his body and an affable manner that invites you into his steady as she goes groove. These are character traits that inform a thoughtful winemaker, always looking for the right way to respect a new vineyard, and to make a known one shine more brightly.

Born on the Big Island in Kona Hawaii, Mayo has called Santa Cruz home since he was 8, moving mainland in 1992. He attended UC Davis, earning a degree in Viticulture and Enology, and began his hands-on experience in Corralitos, at the Split Rail Vineyard. His first full time job in the industry was at Testarossa, where he spent 8 years, starting as a Cellar worker, after which he was promoted to Production Manager, then to Assistant Winemaker. He came to Bargetto in the summer of 2017, where he works alongside another Testarossa alum, winemaker Bobby Graviano.

Mayo is at ease in the cellar, but he truly comes alive in the vineyard, because we all know that’s where the magic happens. And it’s where the, ahem, crap happens, too. Witness what befell the Lilo Vineyard in 2020. It wasn’t bad enough that the year in general was a major bummer, but deer got into the vineyard after budbreak and literally ate the crop. Didn’t even have a chance to get smoke tainted. This is truly something to mourn, as the 2019 Assiduous Lilo Pinot Noir was a huge hit on the VinoCruz wine list. Mayo assures me that a proper fence has been installed and the deer will not be feasting on Lilo Pinot shoots this spring. Among the other vineyards he caretakes is Kells in the Los Altos Hills, from which he makes an altogether stunning Merlot, done in a carbonic fashion. Think Beaujolais-ish, more like a riveting Pinot Noir than Merlot, but it still has all that vibrant red fruit and pepper characteristic of the Bordeaux grape. It’s juicy and splashy, like a pool party. More serious in weight and tannin is his Black Ridge Vineyard Malbec, which puts leather and tobacco front and center, with a core of dark fleshy plum and blackberry jam. He’s got a divine Bates Ranch Cabernet in barrel which I can’t wait to try when it goes to bottle.

You can find his latest release of Chardonnay at VinoCruz in Soquel: it’s on the list by the glass and bottle, and is a pure expression of Bald Mountain Vineyard, the legendary property farmed by the Beauregard family in Bonny Doon. His Regan Vineyard Pinot Gris is the definition of drinking spring, filled with lime, apricot and peach.

In honor of March being Women’s History Month, J.Lohr is sharing thanks for the women who have mentored and supported them. On the #JLohrWomen page, you’ll find a welcome video from Cynthia Lohr and moving tributes from J. Lohr team members to the inspiring women in their lives. Cynthia Lohr selected one of the winning wines from the SF Chronicle Competition to feature, the 2019 J. Lohr Fog’s Reach Pinot Noir. “One of my favorites in our collection is our J. Lohr Fog’s Reach Pinot Noir from our cool-climate, sustainably farmed estate vineyards in Arroyo Seco. Flavors and layers of dark rhubarb and black-cherry fruit with cinnamon and nutmeg are a perfect, earthy pairing with the bright and contrasting savory notes in the Roasted Heirloom Pepper and Tomato Tart with a simple Herb Salad, recipe below. It’s an elegant, sumptuous offering for a lingering brunch or supper, and sure to please the diverse palates in any family, like mine.”  – Cynthia Lohr, Co-Owner/Chief Brand Officer

Next Chapter for Mesa Del Sol

Arroyo Seco has certainly been in the news of late. Ann Hougham, the tour de force behind the resort and vineyard she and her late husband Jake imagined on the banks of the Arroyo Seco River, tells us she has passed the baton of the storied property to new owners. But, she will still remain involved in the operation, with its stunning view of the Ventana Wilderness, at least for the time being.

“It’s a dream scenario!” she told us. “I get to stay connected and aid in the transition, and help the new stewards learn the ropes. They are totally excited for this new opportunity, and so am I! It still hasn’t sunk in yet!!” She says that the new owners have granted her 1k cases of her wine out of inventory, so she will still be selling it, so step on up if you want some. They also plan to keep Ian Brand on as winemaker for the wines coming off the vineyard property, and that she will assist in vineyard maintenance for a while as well. “Future plans will be unveiled soon!” she promises.