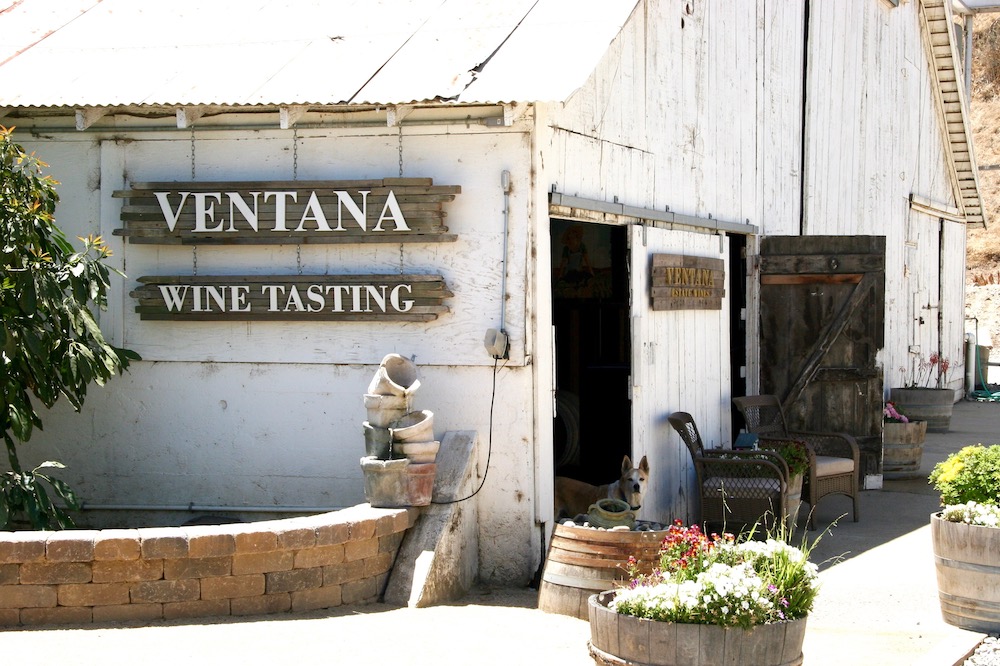 It’s hard to think of a more influential personality in the revitalization of the current Carmel Valley Village wine scene than Russell Joyce. Along with his wife Charlotte, who established The Wine House at the site of the old Carmel Valley dairy in 2017, they’ve injected much-needed vitality into the once sleepy village, making it the place you want to be seen. With its capacious outdoor patio and plentiful seating, Joyce Wine Company and now its neighbor Scratch entice visitors to drink in the bucolic setting while imbibing a crisp Riesling, nervy Tondre Pinot Noir, a vibrant Albarino or a cold beer. Sorry, no milkshakes, although Charlotte and Russell’s two-year-old son would probably be the first in line.

Now, the Joyce’s are realizing their long-held dream of owning a truly magnificent winery property that will enable them to expand to their heart’s desire. “We’ve been looking for a long time,” Joyce told us. “We started the conversation back in 2019. It’s one of those rare deals: they don’t change hands easily. There were so many moving pieces. I’m so excited, at my age, to have this opportunity! It was vacant for so long, and now, it gets to see new life.”

You’ll recall that the Ventana Winery operations ceased in 2017 when Folktale founder and president Gregory Ahn partnered with Randy Pura and Bruce Sterten to overhaul the vineyard.  Ahn at the time told Edible Monterey Baythat he hoped to reimagine the winery facility as a new hospitality center for Monterey wine country. Now, it’s Joyce’s turn at the helm.

He admits the hunt for a suitable winery location, where he could bring fruit directly in from the vineyard instead of having to truck it for miles and miles to a processing site, was discouraging at times. “There’s just not a lot of opportunity for the younger generation here in this Valley. The old guard just doesn’t want to sell. Getting hold of a property that can really make a difference was a challenge.”

Disheartened at the lack of available properties, he thought about building something from scratch, but was even more discouraged at the thought of all the hoops he’d have to go through and how lengthy the process would be. “It was just a nightmare. I didn’t want to waste 10 hears of my life!” he says. Two years of negotiating for the perfect turnkey operation, albeit a bit rusty, seems a cakewalk.

Consequently, Joyce finds himself in the position of being the difference-maker in a place ripe for difference-making. He praises the Arroyo Seco appellation for its wonderful microclimate, clean clear water, rocky soils, excellent drainage and that difference-making wind. Most of all, he likes what the vineyards produce: high-toned wines with bright acid. That’s his hallmark, “This is really the perfect fit. It’s a natural program for me.”

He’ll have the whole place to himself. And he’s fine with that. It’s a serious 10,000 square foot production facility with catwalks, 45 massive tanks, including ones that can hold 25k gallons, a huge outdoor crushpad and two presses. A lot of rehab is needed, both at the winery, the 7,000 square foot barn and in the vineyard. He envisions a showpiece barrel room, ideal for events.

Clearly, it’s the grapes that excite him most. He plans to plant some fun new varietals that will really show off the terroir, like Albarino, Vermentino, Trousseau and Gamay. And then, there’s the plentitude of outdoor space that will allow him to create the perfect playground for wine lovers and their families. Outdoor kitchens, bocce courts, firepits, perhaps acres of lawn. He’ll install tree lines and wind breaks. It’s going to be awesome.

And he’s super excited about the neighbors: J Lohr and Kendall Jackson, Michael Griva, Zabala. “This is one of the premium pockets in Arroyo Seco. I’m super excited to bring more life to this AVA. I hope to be a bridge between Scheid and Wrath. I won’t be shy. We’re going to create a super cool vibe and style. We feel humbled to be one of many young wine producers carrying the torch and paving a road for the next generation of wine producers to flourish here in Monterey County.”

Most likely, his son will be one of them.