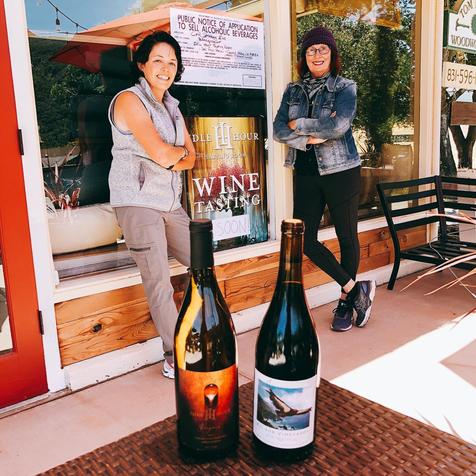 July 27, 2021 – It’s been a long year and then some for Anna Marie Dos Remedios, the owner/winemaker of Idle Hour, who started her label in 2007, and opened her first tasting room in Carmel Valley Village in 2014. The pandemic forced the closure of her tasting room and she pretty much turned her attention to her lodging establishment and tasting room up in the Sierra foothills, called the Queen’s Inn, where she has her home.

Although being in the lodging business was a genuine bust at first due to nobody traveling, the inn eventually proved a godsend, as it has ample outdoor space, and people were eager to come out to taste wine. Travel picked up as well, and this year, she’s been utterly slammed at the property, which is in Oakhurst near the southern entrance to Yosemite.

“We’ve become a full time restaurant, seven days a week!” she says. “Not that we ever planned it, but we started out with some food pairings and people loved it so much. Then we started our Supper Club, with three-course prix fixe dinners on the first Saturday of the month, and they started selling out even before I could post the menu! Serving food there every day now lets our chefs be creative.”

You can forgive her if she’s been a bit sidetracked trying to keep that Coarsegold ship sailing, while also dealing with the disastrous harvest of 2020, plus the wildfires that threatened to evacuate the Yosemite area last fall. At a bright moment, before all the fires in the Monterey area erupted last summer, she and Lenora Carey of Big Sur Vineyards started talking about sharing Carey’s space.

Life and a cranky-mooded 2020 got on the way, though, throwing curveball after curveball. It took a long time for Dos Remedios to find the help she needed to staff the Idle Hour Carmel Valley tasting room, but she feels grateful she finally has that covered. (She found someone on Craigslist.)

“Finally!!” says Dos Remedios. I think we posted something on Instagram on July 15, last year, saying we were going to be opening a shared tasting room, and here it is, one year later!”

The Idle Hour tastings will take place in a 20×20 room behind the Big Sur Vineyards tasting area. “It’s about the size of our old space, but it feels bigger. We’ve got both of our bars there. It’s a really nice setup.” She replaced the granite tops, with wooden ones.

“Our club members have been so loyal through this, even though they had no place to come and taste, they still supported us with orders! We’ve even been getting club member signing up from other states! It’s been amazing. We now ship to 36 states through VinoShipper.”

She says she and Carey are planning a soft opening celebration at some point. “Probably in August, before harvest!”

Meanwhile, there is plenty of patio space for patrons of both tasting rooms: the Idle Hour tables are on the side. Carey has live music every Sunday, from 3 to 5pm, and people can order food from Trailside, next door, to be delivered directly to their tables.

Dos Remedios hopes to do some food pairings in the Village later on, once they get a rhythm going.

Among the wines you’ll be able to taste at Idle Hour are her new Malvasia Bianca (Madera), Viognier (Sierra Foothills), Pinot Noir (Griva Vyd, Arroyo Seco), Alicante Bouschet (Madera) and Tannat (Herringer Vyd, Clarksburg). She’s been bottling a Vin Rouge red blend that is based on Malbec—a variety she loves for its notes of blueberry and violets—in 1.5 liter pouches. They are incredibly popular at the tasting room up in Coarsegold, where the crowd tends to go hiking, biking, camping and boating.

“We were throwing away so much glass with all the bottle and glass sales, I decided to get kegerators for a white and a red, and will do the same in Carmel Valley.”

She says this past year, as hectic and unpredictable as it’s been, has been rather cathartic.

“I look back now and it’s been a year of evaluation. It forced us to look at our businesses. What do we need to do? I’m glad we had that time.”

One of things she’s realized is that she doesn’t need to be so focused on expanding production. For one thing, they don’t need to focus on wholesale anymore. “We’re really focusing on club members now. I can make 14-16 varieties. This is what I’ve always wanted to do from the start. I can play with reserve bottlings that have 20 to 30% new oak, versus my non-reserves which are all done in neutral oak. It gives me a chance to choose the best of the best barrels, which has been fun.”

She’s so glad to welcome club members back to the tasting room, and is excited about the new energy everywhere in the Village. “It’s great to see everyone’s face again!”

Rexford Winery has officially closed its Carmel Valley tasting room and, yes, another winery will be taking over: details forthcoming. Meanwhile, Rexford’s tasting room at the winery on Swift Street in Santa Cruz is now open every Saturday and Sunday, from 1-5 pm, for outdoor tastings, with the last seating for tasting at 4:15. Reservations are available via the website, with drop-ins welcome. Last call on the outstanding 2017 Merlot from the Santa Cruz Mountains, as well as Cabernet Franc from Black Ridge Vineyard in Los Gatos. Current releases are available to purchase at the webstore, with free shipping to 38 states on orders of three or more bottles: refordwinery.com