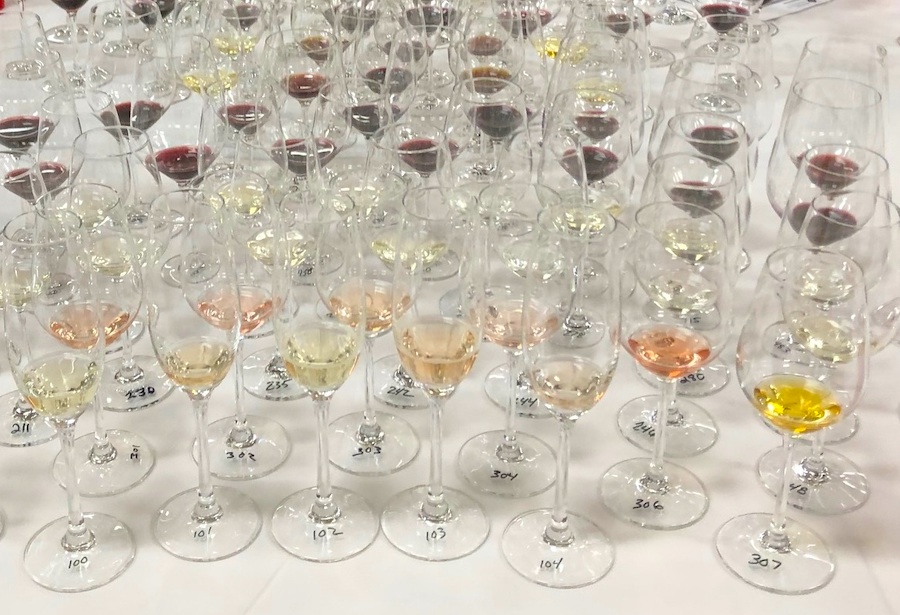 January 14, 2020 – Local wineries showed up to claim their share of recognition once again at the 2020 SF Chronicle Competition, held Jan 6—10 in Cloverdale. This is the largest wine competition featuring North American wine, with over 6600 entries this year. It’s a herculean effort that takes months to organize and hundreds of volunteers, who get paid in wine, and are happy to do the backbreaking work.

This year, we were all shocked that Best White went to a Trader Joe’s wine made by Delicato!! The other shocker was that the Chardonnay that got sent up to Sweepstakes was from the Grand Valley of Ohio. What? Not sure how it snuck past a far superior Chardonnay from Chamisal, but apparently in a tasteoff of all the Best of Class Chardonnays, which included J. Lohr’s Arroyo Vista, the Ohio unoaked bested its competitors by one vote. And that’s what it all comes down to: every vote counts.

This competition only allows one wine per varietal to reach Sweepstakes. Organizer and chief judge Bob Fraser does this to reduce vote-splitting. So, only one Viognier, one Chardonnay, one Syrah, etc., gets sent up to the final Sweepstakes round. This year, 66 wines appeared before us in Sweepstakes. A formidable array, for sure, but I’ve had upwards of 90 presented in the finals of other competitions.

I can report that all this year’s big winners were solid, even if I didn’t vote for the Cab that took best red. I thought the 2017 Sequoia Grove Merlot was far superior, and the Amelia Wynn Grenache from Columbia Valley (WA) was fantastically spicy and energetic. In the end, it was a really tough choice in every category.

Judging Sweepstakes, or Sweeps, as we judges call it, is always exciting, because it represents the best of all the wines that have been tasted by the many panels over four days. Among them was the Idle Hour NV Blanc de Blancs from Clements Hills, made by Anna Marie dos Remedios, whose Idle Hour tasting room is in Carmel Valley Village. It was up for best sparkling, along with four others. Good show! We also had Chaucer’s Mead from Bargetto up for best dessert wine. People around me were remarking how lovely it was. No wonder it’s the best selling mead across the land.

Let’s take a minute to congratulate the wineries that scored Double Golds, which means all the judges on the panel agreed the wine was particularly worthy. In most cases, any wine scoring a Double Gold (DG) will be considered for a Best of Class award.

We’ll start with Bernardus, which put on a solid performance, with five wines submitted, four of them Gold, and one Silver. That’s truly outstanding! Their Double Gold winner was the 2016 Garys’ Vineyard Pinot Noir. Next, kudos go to Jeffrey Blair for the DG for the 2016 Blair Estate Pinot Gris from Arroyo Seco. Gali Vineyards also scored a DG for their 2016 Tempranillo (Corralitos) and Anna Marie takes another nod for her 2015 Idle Hour Winemaker’s Reserve Tempranillo from Heringer Vineyard in Clarksburg. Tempranillo is having a moment, no?

In addition to its two Best of Class scores, J. Lohr was also awarded a DG for the 2017 Los Osos Merlot from Paso Robles. Ms. Kori Violini has to be popping bottles of her 2018 SLH BdB sparkling (which took Silver) to celebrate her two Double Golds, including one for her 2017 SLH Pinot Noir and another for her 2017 Monterey Syrah. Good showing, Kori!

Congrats to Scheid on the DG for their 2018 Monterey Estate Chardonnay from sustainably grown grapes. Winemaker Tony Craig scored DG for his 2016 Sonnet Cellars Tempranillo from Gali Vineyards, and a Gold for his 2017 Pinot Noir from the same vineyard. A vineyard to watch, for sure.

Soquel Vineyards gets the prize for the most Double Gold’s this year with four. Taking the honors were the 2018 Santa Cruz Mountains Pinot Noir, 2081 Doctor’s Vineyard Pinot Noir (SLH), 2016 Intreccio, a library selection from Napa Valley and the 2018 Trinity Rosso, a Petite Sirah-leading blend.

Talbott scored Silver for the 2016 Kali Hart Chardonnay and Gold for the 2017 Kali Hart Pinot. Last year, the 2016 Kali Chard scored a Double Gold and the Pinot, Silver. What a difference a year makes in the life of a wine.  We’ll see how all these babies fare in subsequent competitions this year.

All the results can be found at winejudging.com

Don’t forget the public tasting of the medal winners is on Saturday, February 15th at Fort Mason in San Francisco.