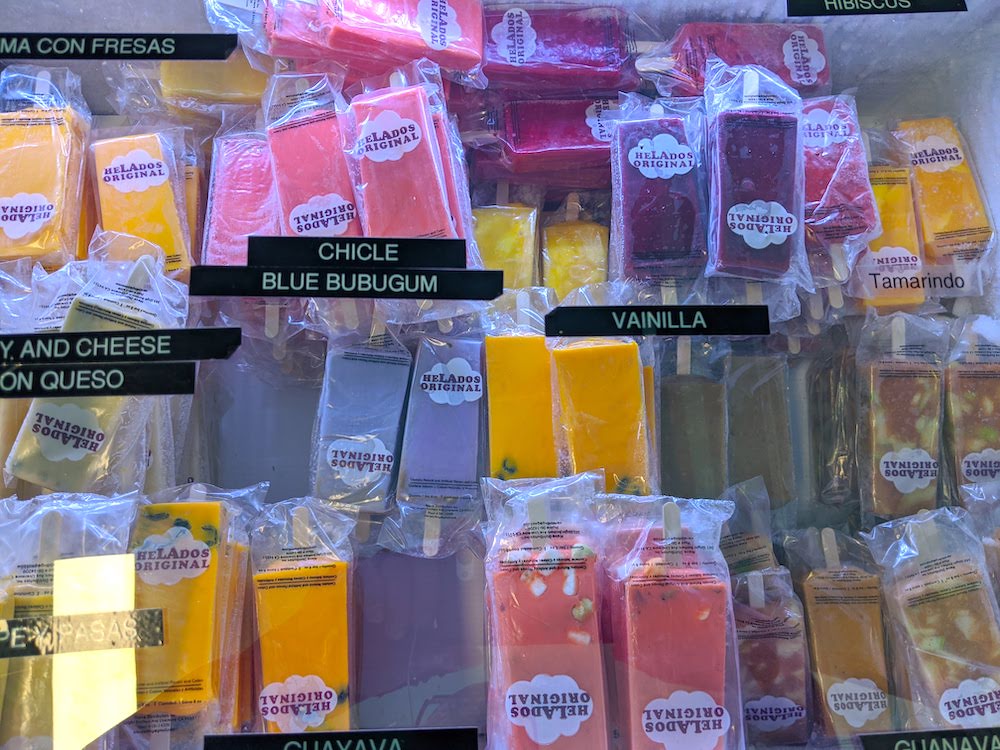 July 7, 2020 – Calling Helados La Yaquesita an ice cream shop is a little like calling Muhammad Ali a decent boxer. It just doesn’t do it justice.

Not to say Yaquesita isn’t an ice cream shop (helados being Spanish for ice cream).

The 3-month-old spot at 1450 Fremont St. in Seaside comes on strong with no fewer than 28 rotating flavors of Marianne’s Ice Cream like Kahlua Krunch, 2am Truffle and Mandarin Chocolate. Macapuno, they got it. Root Beer Swirl, they got that too.

I tried the signature 1020 in a sugar cone while physically distanced at the store, and the combo of caramel ice cream, chocolate swirl and chocolate sandwich cookies delivered deliciously.

Then I had a banana-almond-fudge milkshake delivered to my house—which is free for orders that exceed $10, within their delivery radius ($10 minimum for Seaside; $20 threshold for Monterey and Marina)—and I had to force myself to hide it in the fridge before I took it down in 20 seconds.

Then there are the cold treats that evoke the food carts of Baja and beyond, which is on brand, as Yaquesita is slang for someone from northern Mexico. That part of the selection stars dozens of real-deal paletas, or popsicles, in flavors like guayaba (guava), berry-with-cheese (a real thing, gringos) and rompope (eggnog).

My pal tried the mango paleta. “[It’s] good because the frozen mango inside maintained its texture and didn’t get all weird from the freezing process,” she reports. “The non-mango bits of the popsicle are sweet but not overly flavored and it all goes very well together.”

Another tried the piña. “I was so excited to see chunks of pineapple; the taste is awesome,” she says. “It’s really refreshing, with a natural flavor that doesn’t feel like I’m putting an entire frozen stick of sugar in my mouth.”

There are also specialties like “mangeados,” tubs of ripe fruit cubes with chili powder and lime juice, or “bionicos” with housemade Mexican-style crema, mixed fruit and granola. There’s also an item I have in my crosshairs for my next visit: a cheesecake popsicle preparada, or “prepared,” with a choice of chopped strawberry or banana decorating it along with chocolate, caramel or strawberry sauce. Dios mio.

The food cart-leaning luxury also skirts into the savory with goodies like “Doritoslocos,” a bag of chips doused with nacho cheese and jalapeños in the original Doritos bag. Simple, sloppy and fun. Nacho cheese on your chin is a good thing.

I also tried the “Tostilocos,” which were more over-the-top, with a bag of Tostitos salsa verde chips stuffed with coated peanuts, dried mango, chopped cucumber, diced jicama and more, all dusted with chili powder and served with a half lime. Anticipate crunchy and chewy chaos with a lot of texture and surprisingly complementary flavors.

My final dose of crazy: the pepino loco, a close cousin of Tostilocos, with big chunks of cucumber—pepino in Spanish—as the base instead of chips. The coated peanuts didn’t seem to sync as well with everything else with this one but it’s a lot of freight for not a lot of money.

The smoothie lineup features choices like frozen mango-banana and turmeric pineapple. Juices range from the classic carrot-orange 50/50 “combinado” to the vampiro (50/50 plus beet juice) to the green (pineapple, green apple, ginger, kale, spinach, celery and brand). There are also aguas frescas, strawberries served with cream, and frozen yogurts with fruit.

The lineup of 12 sandwiches is straightforward and sturdy for $8-$10 a pop, with things like salami, barbecue chicken and turkey club. The two I tried proved simple, rustic and satisfying: a solid chicken pesto on soft ciabatta with oven-melted Monterey Jack cheese, thick tomato and onion, and a tri-tip chimichurri with generous mozzarella. The sauces on both are made in house, and have nice fresh zing.

As a grand opening special, both came with a complimentary soda and bag of chips.

So yes, Yaquesita has a lot going on, not to mention the rock en Español happening on the flatscreen TV or the adorable emblem with the owner’s daughter Camila.

Most notably it adds to the city’s cred as the best in the area for international flavors—and contributes to the depth of new young business owners in the Fremont/Broadway district. It also gives Seaside another person of color in an ownership role.

Humberto Valenzuela, 31, opened the spot because he was eager to share his unique recipes for things like the popular mangeados, and because he noticed there were few northern Mexico-style spots nearby.

“There simply aren’t a lot of places like this around here—doing crazy apples, Tostilocos and chicharrones,” he says. “That was the inspiration.”