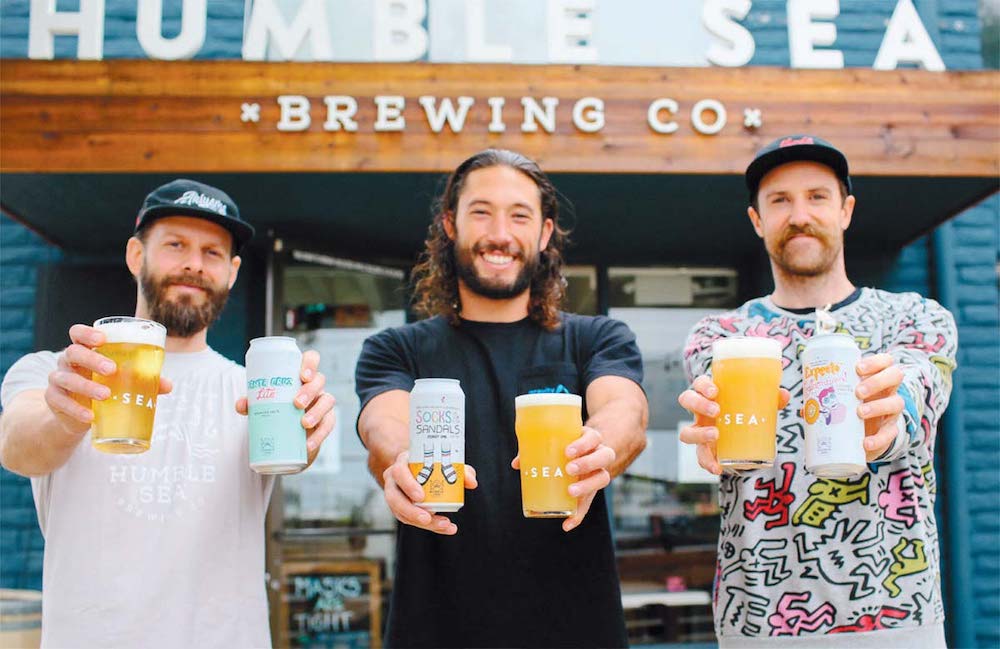 January 26, 2021 – Humble Sea Brewing Co. is about to undertake a not-so-humble expansion.

The Westside Santa Cruz brewery, which is approaching its fourth birthday in March, has been a cult hit from the get-go, cultivating a rabid fan base obsessed with its smart IPAs, lagers and other ever-rotating small-batch craft beers.

Now it has plans in place to add no fewer than three new taproom-restaurants in another part of Santa Cruz, in Silicon Valley and in Pacifica.

It originally entertained nine cities (including San Jose, Oakland and Gilroy) and two major metropolitan areas (Los Angeles and San Diego) as prospective sites for its growth spurt, but ultimately settled on those three general locations.

“Coastal, out-of-the-way towns are on brand for us,” partner and head brewer Nick Pavlina says.

He acknowledges Silicon Valley doesn’t exactly qualify but did offer the possibility for another brewing facility on top of their Swift Street operation and, Pavlina adds, “more avenues to experiment.”

He is thrilled to be accessing new audiences.

“To get the beer in that many more hands is what’s most exciting,” he says. “Having cans shipped to you is one thing, but having the whole experience of the bar and the beer fresh from the tap makes it that much more pleasurable.”

Popular collaborations with breweries across the country and Humble Sea’s signature creativity—in the glass and on the label—will continue unabated.

“We’ll continue to experiment as we have been,” Pavlina says. “We’re eager to work with new communities and more people.”

Job openings for the new sites and prospective real estate specs for the new properties have been posted on Humble Sea’s website. But since a lease has only been signed for the Pacifica destination, the brewery’s principals are hesitant to go into much detail.

Co-founder Frank Scott Kreuger concedes this type of growth was not the original vision.

“This is definitely not part of some master plan,” he says. “We started notoriously tiny, home brewing in Nick’s grandma’s garage—and we were surprised we were able to open the brewery on the West Side when we did. But people have been really supportive.”

He adds that after early years “running around like chickens with our heads cut off,” now the growth has allowed them to tackle long-held ambitions like greater engagement with environmentally focused nonprofits and staff diversity, equity and inclusion programs.

“The philosophy has always been to grow until it stops being fun,” he says. “It’s getting more and more fun, and we’re getting to do more of what we wanted to do since the beginning.”

Humble Sea is looking for general managers and directors of hospitality for each of the three new locations. Visit the website for full details.

UPDATE: On April 1 Humble Sea announced that its second Santa Cruz County taproom would be located at the historic Cremer House in Felton, a popular restaurant not far from where the brewers got their start. It will have “tons of taps, a full kitchen and cocktails,” the announcement read. Cremer House closed last year due to the pandemic, but they hope to reopen as Humble Sea Mountain Tavern by summer.