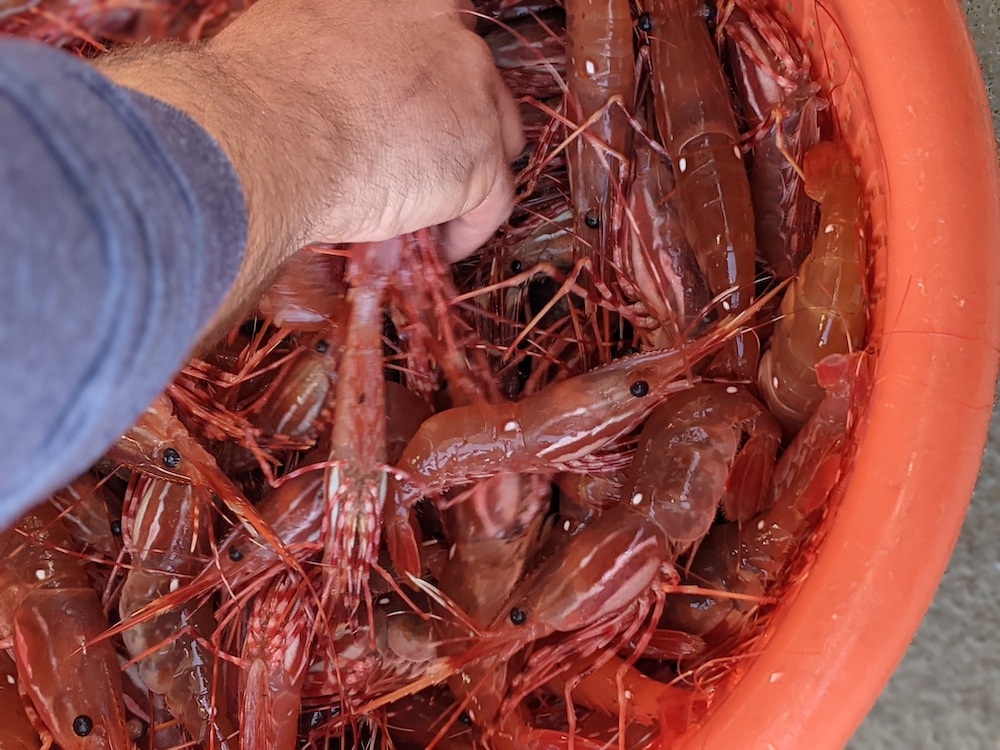 December 1, 2020 – Fisherman Skylar Campbell stands on the aft of the Ocean Warrior and clears his throat from behind a face mask.

A woman stands in a line numbering around 30 adults, two dogs and one kid. When she sees the boat docking, she unleashes a burst of applause, which is understandable. She’s among those who have been waiting for a half hour to buy what he’s bringing ashore, standing with a bag filled with ice on the slim pier that floats between Wharf Two and the Monterey Harbor offices.

“We have 100 pounds of spot prawns,” Campbell says. “Five pounds is the limit so there’s more to go around. I’m sorry and, possibly, you’re welcome.”

My commercial fisherman-journalist friend and I are 11th and 12th in line. I do some math. We will be eating some of the freshest seafood we’ll ever try later today. Others at the tail of the line likely not.

Even at $21/pound, locals-in-the-know are more than willing to endure and embrace the exercise because the shrimp is that good. And not just good on the tastebuds.

Seafood purchased directly from the boat is dramatically fresher.

It’s easy to acquire. (More on how in a minute.)

It’s fun to make a field trip out of it, perhaps generate an experience for the kids.

Pending line lengths, it’s an opportunity to meet the fisherman who catch dinner, learn how they do it, and how they might prepare it.

Come Dungeness crab season—tentatively rescheduled for Dec. 15 after multiple delays to protect whales and turtles from fishing gear entanglements—it’s a chance to get great deals on a local delicacy.

And buying from the dock creates better value for the consumer and puts a little more money in the pockets of local fishermen.

“It’s the freshest you’re gonna get,” says David Toriumi, a career fisherman working to make dockside fish sales more accessible in Moss Landing and Santa Cruz. “It’s fresher than what I eat, because I don’t eat until I’m done selling.”

Amid the unfortunate outcomes of coronavirus, Toriumi points to local sourcing as a big positive.

“I think COVID has played in,” he says. “It’s affected the psyche, inspiring people to focus on resources in the community.”

Citizen ambassadorship has helped boost dockside sales. High-grade, high-value seafood has a way of selling itself.

“Word of mouth is pretty big,” Toriumi says. “Someone comes and they’re looking at a fish and having it cut for them rather than shopping for a filet that’s been sitting on a shelf—there are a lot of questions that go through people’s mind: ‘Where’d it come from? How long has it been sitting there?’ Don’t get me wrong—there are good chains that support local, but there’s nothing like getting it from a fisherman as he comes into port.”

A Guide to Dock Sales, meanwhile, runs through tips that include how to best transport the catch (hint: a cooler or bucket prepped with ice); how to best store it; and how to best cook it.

It is also worth noting that MBFT is helpful in detailing eater access to fresh seafood across all avenues, including Community Supported Fisheries like Real Good Fish and Ocean2Table and area markets like Sea Harvest and H&H Fresh Fish Co.

Monterey Bay Fisheries Trust executive director Sherry Flumerfelt helped assemble those guides, and is thrilled to see local fishermen find some relief after being battered by everything ranging from regulatory changes to COVID crashes in restaurant demand.

“It’s easy and fun,” she says. “The quality of product is amazing. It’s just the best way to get fresh local seafood—especially for those who know the difference between freshly caught and not—while supporting these fishermen.”

Social media has also streamlined access. Skylar Campbell has sold from his boat in Monterey for a couple of years and coordinates Monterey Fisherman’s Market on Instagram, where people can learn what’s being caught and when it’s being sold. Fellow career fisherman Joe Lucido, meanwhile, updates Fresh Catch Monterey in a similar way.

They’re both seeing more interest than any time previous. One of Campbell’s most enjoyable elements of the dock sales process is the on-the-ground consumer education.

“I’m able to go grassroots, informing them on what we do and how we do it,” he says. “I get a kick out of that. Generally people have this idea of commercial fisherman catching massive amounts of fish with super-destructive, largely unregulated methods, that we indiscriminately kill and harm. People come down and think we’re fishing with nets. [Instead] we use lines, traps, and return bycatch; it’s a very targeted fishery.

“We can correct the narrative. Then it becomes part of the fabric of how they get their food.”

The best moments, though, seem more culinary than cultural or ecological—though in a conscious and connected foodshed those worlds harmonize.

“My favorite reaction is the person making it to the front of the line excited to tell me how they prepared the fish or shrimp they got the week before,” he says.

I can identify. With the spot prawns kicking in my backpack and then snapping on the kitchen counter, I felt inspired, if not compelled, to best honor that freshness with as many interpretations as my 2 pounds might allow.

From pre- to post-Thanksgiving that included all sorts of things I wouldn’t have conceived without that motivation: sashimi prawn and avocado atop super-seasoned homemade crostini; peel-and-eat whole crustacean on the beach with improvised tomato-garlic cocktail chutney; chopped prawn quesadilla with mozzarella, pepper jack and red onion come Friday.

That took me back to something else Campbell shared about business direct from boat to eager eater. It speaks to the way my palate is reacting too. As he says: “It’s nice to see this taking off.”