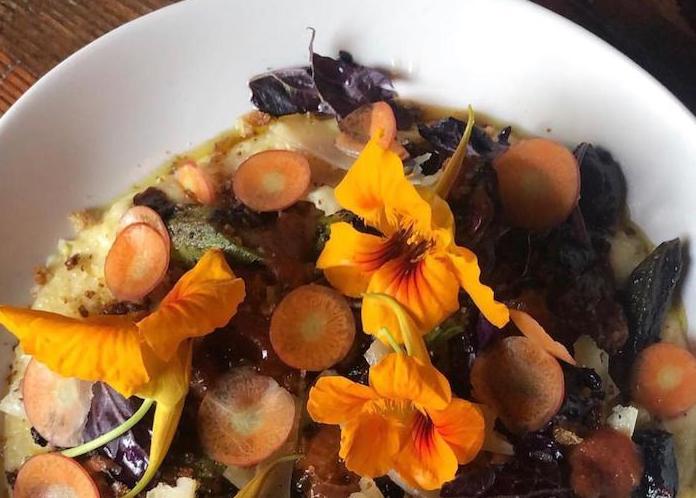 September 24, 2019 – All good things come to an end, which can feel a little sad. But it also means new beginnings.

Most of Mercado Sagrado’s involvement with its multidimensional “pop-up” wrapped at the end of June, after a popular run in the heart of Big Sur, The Village Big Sur next to Big Sur Deli and River Inn (in the building that once housed Maiden Publick House and the Village Shops).

The Los Angeles-based holistic platform—studded with quality contributors—spent the month delivering a combination of earthy brunches, lunches and dinners; a hippie boutique stocked with artisan creations; liquids ranging from health tonics to craft beers; healing arts like yoga, massage and ayurvedic workshops; and activities including plant identification hikes and apparel-making training. Part of the plan was impermanence, and for chef/fermentation specialist Greg Arnold to return to his Mesa Verde vegan restaurant in Santa Barbara.

But Mandy and Patrick Orosco, owner-operators of The Village figured they should do something with all the positive momentum.

While Mercado attended to the boutique, the Oroscos extended the remainder of the program through the summer, continuing the yoga schedule, sound baths, culinary yum and workshops—while planning improvements on the Village apartments with better session spaces and guru residencies in mind.

He seems most excited about continuing the restaurant’s work, citing the popularity of its vegan-leaning fare, the welcoming front-of-the-house team led by local husband-and-wife duo CJ and Cara Nugent, and the dynamic pair of chefs in the back, AJ Beatty and Chris Rayman.

Cue another cliché: You can’t have too much of a good thing. So another guest chef has come in to complement Beatty and Rayman.

“We’ve already stepped up to support a visiting chef without local connections,” Orosco says, “so we were really stoked to bring in one who really knows the area.”

That’s the other ending/new beginning. Jacob Burrell and Fiona Bond have historically been a big part of the South Coast food scene, in the kitchens and gardens of Sierra Mar and Big Sur Bakery. And they recently wrapped up a stint launching a new restaurant called Parachute in Bali. That allowed Burrell (ne Pilarsky), who also spent time at Michelin-starred Manresa, to return and consult on still more meat-free and ingredient-focused foods. Call it pop-up part two. Bond is directing marketing and social media while they’re here helping for August and September.

“Bali was rad, and so good with the kiddos,” she says. “We’re happy to be back for an extended visit, though. This community has always been so good to us.”

There’s a lot to like on the updated menu fueled by Savor the Local produce, Water2Table seafood and the creativity of those three chefs.

Orosco struggles to describe it.

“It’s somewhat difficult to put in a box, because we’ve been breaking all the rules, which is fun,” he says. “Everyone picked up an instrument and started playing jazz.”

Whatever analogy applies, collaboration is the foundation.

“We’re trying to empower three creative minds to experiment within an identity that happened organically,” Orosco continues. “The food is beautiful on the plate, with attention to detail, a combination of flavors you can return to, and some fireworks that catch you by surprise.”

If it proves too difficult to choose between the veg-vegan options—or between the local lingcod and Marin King salmon in an insane sounding lemon-cashew beurre blanc with fermented chili and marjoram flowers—a chef’s tasting menu is an option ($75).

The in-house desserts ($9-$18) include seasonal sorbets, galettes (local plum-strawberry) and a chocolate cake with coconut caramel. Vegans will love them some of Rayman’s cashew-based cheeses with local honey, various house pickles and sourdough crackers ($25).

“We want to be the Cheers of Big Sur without competing with current offerings,” Orosco says. “A lot of people do a good hamburger, and good comfort food. We want a Post Ranch-like experience in an environment where you wouldn’t feel out of place wearing flip flops and board shorts. But the primary focus is everyday brunch.”

The plan is for Burrell to conclude his residency and hand the reins back to Beatty and Rayman at the end of the month.

After a closure for January-February of 2020 for a final remodel, an official grand opening with a new restaurant name and brand identification is planned for March 2020.

Which will mean another round of new beginnings. Nothing to be sad about there.