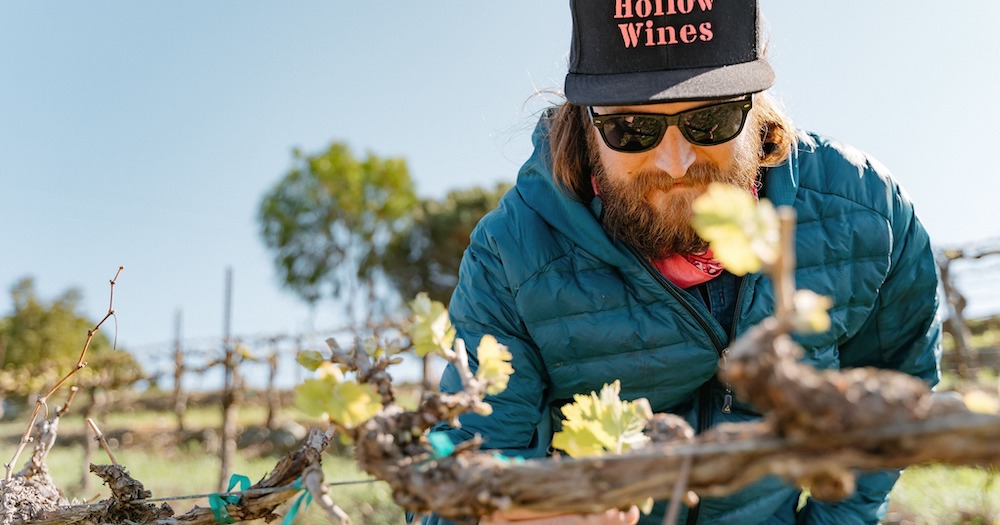 October 8, 2021 – Siletto Family Vineyards in San Benito County is one of our area’s most sought after sources for unusual, organically-grown grapes. There are five different vineyards in the family portfolio, spanning 125 acres of mostly gravelly soil along the San Benito River and Tres Pinos Creek south of Hollister.

A true grape basket, Siletto has more than 34 varieties currently planted—encompassing Europe’s premier growing regions, including Austria, France, Portugal, Spain and Italy. It’s hard to keep up with exactly what’s planted here, because grafting is constantly adding new things and more of popular varieties, like Aligoté, Greco di Tufo, Falanghina, Sagrantino, Ruché and Negrette. You’ll also find other rarities like Counoise, Cabernet Pfeffer, Grenache, Vermentino, Marsanne and Mencia. While the oldest vineyard, Cienega, was planted in 1965, most of the vines were planted 32 years ago. To find all of these goodies in one place is truly unusual.

No wonder there’s often a waiting list for grapes from this coveted site, which sits 30 miles from the Pacific. Now under the care of John Siletto, son of founder Ron Siletto, who passed away in July of 2020, the vineyard has become a favorite of local wineries, including Stirm, Ser, I. Brand, Seabold and Comanche Cellars.

This area has long been home to vines: at one point 6,000 acres were planted for use by the massive Almaden Winery. Ron Siletto, son of immigrants from the northern Italian region of Piedmont, worked his way up the ranks to become president of Almaden Winery. He purchased his first vineyard, the 25-acre Cienega Vineyard, in 1986 when Almaden was sold to Heublein Spirits and he “retired” from corporate life.

Stiletto Family Vineyard is attracting a growing number of winemakers who live outside the region, but are drawn to its unique soils and pure, straight up fruit. One of those vintners is Woodson “Quinn” Hobbs, who owns Hollow Wines. He grew up in Portola Valley, but currently resides in Los Angeles, with his wife from down under Alison and their daughter Mina.

Hobbs requires fruit sources to be organic. If you use Roundup anywhere on the property, you’re squarely outta his orbit. “Roundup is a disaster for this planet,” he says. He considers himself a practitioner of No B.S. winemaking, which he equates to minimal intervention and using wild yeast with no adds other than some sulfur. Some might call it natural winemaking, but he prefers to say “simply good wine making.”

“I’m looking to make wines that are clean representations of each vineyard,” says Hobbs. He makes at least 15 different varietals from around the state and, at least the ones I’ve tried, are completely devoid of the “funk” sometimes associated with other natural wines.

“More acid and phenolics, plus tannins and oak, can reduce the need for So2,” he adds. “They are all bioprotectants. I work incredibly hard to maintain quality while remaining true to the rules of Vin Natural.”

Hobbs gets around. He used to make wines in Lompoc, but as of this harvest, moved all his production to Atelier des Savants Fous in Gilroy. This custom crush facility is run by winemaker and winery owner Tim Slater, of Sarah’s Vineyard on Hecker Pass. The fanciful French name translates to “The Mad Scientists Workshop.” It turns out to be a good fit for someone like Hobbs.

Slater created Atelier mainly for local winemakers, who needed a home for production and storage. He didn’t expect that he’d suddenly have people coming from as far away as LA to use his presses and forklifts to make wines he’s never heard of. But such is the nature of winemaking, especially for those who don’t own vineyards. Hobbs found Slater through his connection with the Silettos.

“I fell in love with Siletto Vineyard,” Hobbs explains. “When I met Ron, we totally hit it off. We became best friends overnight. We were having the best time, hanging out and having dinner. The next day, I texted him and got no reply.” Sadly, Ron had just passed away.

So Hobbs started working with Ron’s son John. “I wanted a place closer than Lompoc to process the grapes from this vineyard, since I like the fruit to be fresh and cold. He told me about Tim Slater’s custom crush.” It turned out to be perfect timing, especially since the tasting room he was planning fell through in the early days of 2020. Since he has lots of varieties in kegs, as well as many offerings in bottles, Hobbs turned to selling his wines to shops that cater to natural wine lovers.

“Young wine drinkers like what they haven’t heard of,” says Hobbs of his Greco di Tufa, a brisk and lemony white, and Falanghina, like salted honeydew melon. Both are sourced from Siletto.

Last year, he made 13 varieties and 19 different wines. This harvest, he expected to bring in 15 or 16 varieties, the last of which was old vine Mission from La Vie Dansante in Morgan Hill. He also brought in Chenin Blanc from Heringer Vineyard in Clarksburg, plus Bourboulenc, Riesling and Pinot Blanc from a farmer in Tehama, up near Shasta, who practices regenerative agriculture using Piedmontese cattle.

Hobbs also happens to be a dedicated surfer, thus the classic skull-capped dude on the label of his 2020 Hang Eleven Chardonnay—who happens to be Steve Zissou from the film Life Aquatic. It’s sourced from Eden Rift Vineyards, also in San Benito County. This wine underwent 7 days skin contact and only partial malo. Certainly not “orange,” it is light gold and looks more like apple cider, smells like vanilla pudding and coconut biscuits, and tastes like cardamom biscotti coated with sesame seeds. An incredibly satiny texture makes it even more endearing. He says it was his best selling wine last year. “We sold out very quickly, so I made quite a bit from the neighboring vineyard at DeRose, (also in Cienega Valley), that just switched to organic farming.” Hobbs clearly has found a new grape home in San Benito County.

Hobbs also made a skin contact Greco di Tufa from Siletto which was truly lovely, with a texture of raw silk and an oozing lemony salinity. Again, not at all orange, nor funky—a pleasant surprise after so many disappointing forays into natural wines.

Exactly what makes his orange wines so different from others on the market? “I am extremely careful with the fruit and keeping it high acid and on a balanced punch down schedule,” he says. “Many orange wine makers think orange wine means just leaving white wines on skins and fermenting them as such. It’s actually a highly labor intensive process and they must be pressed at the exact right time and never pressed too hard to keep the wines from extracting too much extra tannin and any potential VA [volatile acidity – a condition of excess acid that can literally turn a wine to vinegar] that gets picked up from the grapes. Believe it or not, my orange wines last year had the lowest VA of all my wines!”

Hobbs admits he has OCD when it comes to making wines. It’s a trait that serves him well.

If you’re curious about trying some eccentric grapes made in a low intervention style, give Hollow Wines a try.

2020 Shore Pounder Red – This blend of primarily Malbec (40%), plus 37% Petit Verdot, Merlot (17%), Cabernet Sauvignon (3%) and Cabernet Franc (3%) comes primarily from the Siletto Vineyard and opens with floral and juicy fruit aromas, with a hint of cotton candy. It explodes with red juicy strawberry licorice and blueberry flavors, amped up by fermented plum sauce and sweet chocolate. Super juicy, friendly and totally appealing, Hobbs says Shore Pounder is supposed to be fun and chillable. These are wines that he intends for easy drinking. He says that in 2021 and onward they will be canned wines, but logistics stopped them from canning in 2020. This one is a screwcap, so it’s perfect for sipping on the beach or on the porch.

2019 Hollow Wines, Sagrantino, Siletto Vineyard – Opening with faint herbs, olives, earth, cedar and sassafras, this typically tannic Italian red shows up smooth and approachable here, layered with baked plum bars, pomegranate, blueberry and cherry, and packed with chervil, cilantro and marjoram. It finishes with coriander and keeps reminding you of how svelte it is from one end to the other. An amazing execution of Sagrantino that’s amazeballs with spaghetti or eggplant parm.

2019 Hollow Wines “Backdoor Dreams” Cabernet Franc, Siletto Vineyard – For a lover of Franc, this is pure heaven, opening with pretty rose petals and violets, then giving way to pure red raspberry perfume, enhanced by fragrant bay leaves and tarragon, and daintily laced with balsam and spruce tips. Lean but pure silkiness on the palate, it delivers all the cool refreshing red raspberry and pine forest essence you want from a cool climate Cab Franc. This year, he made one lot via carbonic maceration, and the other with a more traditional 5-day cold soak, after which it started spontaneous fermentation: just like you want. It’s looking good for vintage 2021. It’s capped with a pink sugarcane cork.