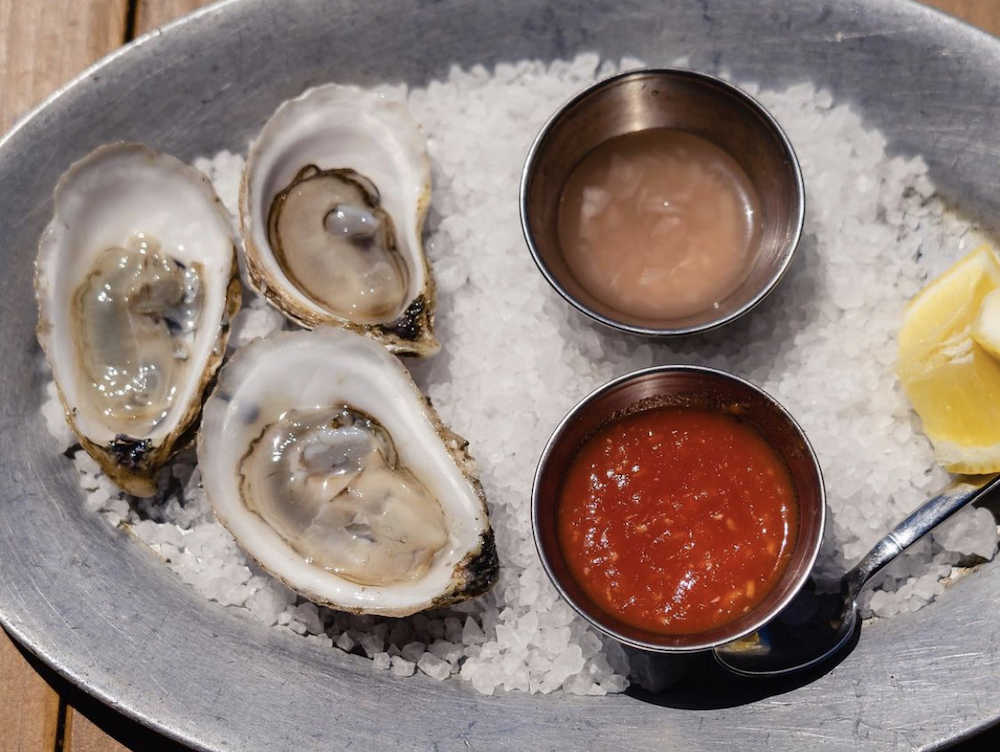 June 22, 2021 – Fruition Brewing in Watsonville thrives on serendipity, and so it was in finding just the right person to take over its kitchen.

For the past two years, Fruition has depended on rotating food trucks and pop-ups to complement what’s on tap, but owners David Purgason and Tallula Preston say they always intended to put Fruition’s kitchen to full use.

“Our little kitchen we built in the beginning was always far underutilized, and we’ve always dreamed of handing someone the keys who could give it all the love it deserves,” they wrote on social media.

And that someone is Ryan Balmain, a whirlwind in the Santa Cruz food scene who brings eclectic experience to his new gig, including stints at Pretty Good Advice in Soquel and local seafood CSF Ocean2table, as well as helming the kitchen at Lupúlo Craft Beer House in downtown Santa Cruz.

“It’s been a mix of luck and wanting to do my own thing,” says Balmain, who grew up in San Jose and began his restaurant career working at the oyster bar of a chain restaurant.

Balmain got to know Purgason and Preston when the couple would stop in at Lupúlo. That friendship led to the three of them talking about future collaborations, but then the pandemic got in the way.

With COVID restrictions finally being lifted, and the Fruition taproom in the East Lake Village Shopping Center fully reopened, Balmain was finally able to get into the Fruition kitchen last month to get his Hindsight Cafe under way.

Balmain’s offerings are what he called “super-simple café-style,” with sandwiches, salads and appetizers all geared to complement the rotating Fruition beer lineup, with a special emphasis on local seafood and produce.

In fact, Balmain is championing oysters as a perfect accompaniment to Fruition brews, and he’s determined to change the way many people feel about them.

“I really want to destroy this stereotype that oysters are risky to eat,” he says, something that some would only slurp raw on a dare. “I want to give people the facts, then give them the best oyster experience of their lives.”

Balmain says that different oysters have different flavor profiles, and can even vary based on how they’re harvested or farmed. The most commonly grown West Coast oyster is the Miyagi or Pacific oyster, and Balmain also likes Canadian and East Coast varieties. A current Hindsight menu offers four different types of oysters, including Miyagis from Point Reyes and three from Massachussetts—Saquish, beach plum and rocky nook—each with their own unique characteristics.

“They’re delicious, easy to eat with a beer, the perfect appetizer,” says Balmain.

In addition to oysters, Hindsight Cafe’s current menu also offers a smoked fish salad sandwich, which Balmain makes with local black cod that he brines and smokes himself, as well as salads, soups and housemade hummus. He buys some of his seafood direct from local fisherme, and shops area farmers’ markets to get the best in produce. And if there’s anything he needs at the last minute, Fruition happens to be right next to the newly opened Staff of Life grocery store in Watsonville.

In fact, Balmain says, there’s great synergy between Fruition and Staff of Life, since the Fruition patio can easily be seen by shoppers inside the store. “It’s a really good draw—shoppers can just look through the windows and see people eating oysters,” he notes.

Fruition, like other nearby food purveyors Coffeeville, Sushi Q and Carmona’s BBQ Deli, is bustling these days and Balmain is gratified by the response to Hindsight’s offerings and everyone’s enthusiasm.

His goal is to make oysters—and seafood in general—fun, affordable and accessible: “The highest price on my menu is $12.”