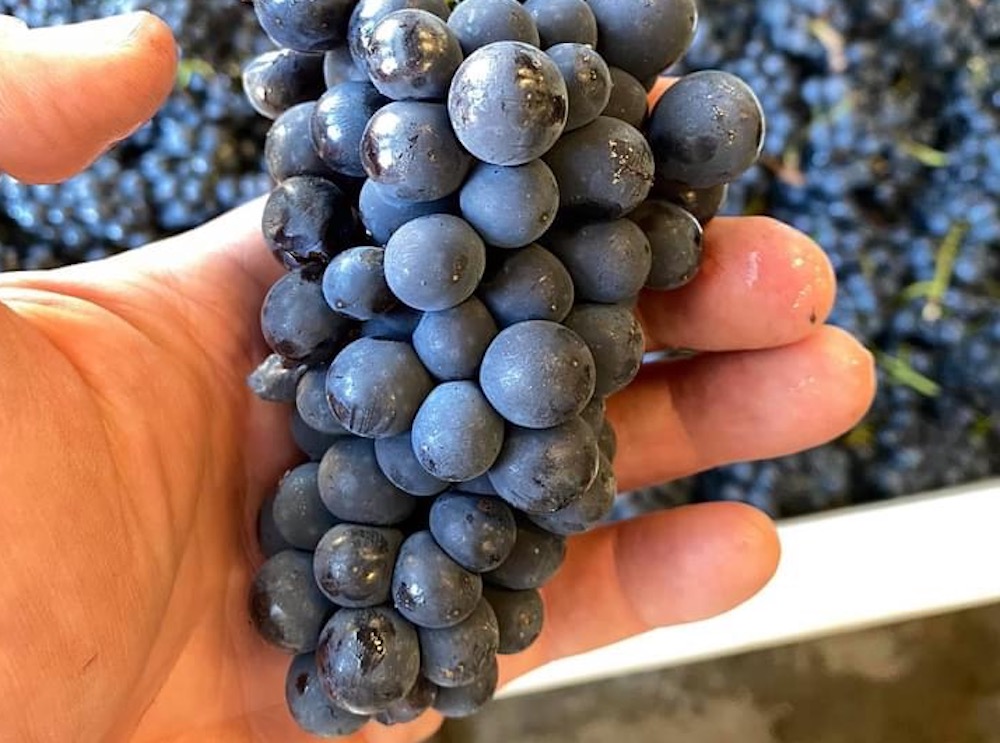 September 21, 2021 – Crushpads are at full crank all over the Central Coast, and it’s not just local fruit filling the hoppers. John Benedetti recently brought in some really nice looking Pinot Noir from the Toulouse Vineyard in Anderson Valley, inspired by making wine with one of his mentors, James MacPhail. An overflowing bin of Hand in Hand Pinot Noir just came in this past weekend, looking fat and ripe.  But the best news of the week was that he finally got a fabulous crop off the Split Rail Vineyard, which has been a heartbreaker the last few years, due to poor set and other weather factors. Benedetti was thrilled: “It was immaculate. Cleanest fruit we’ve ever gotten from the vineyard. Perfect ripeness, too.” That’s a winemakers dream.

Up in Bonny Doon, Ryan Beauregard helped out his neighbors, the McHenry’s, who lost their winery in the CZU fire, by crushing their grapes this year. The families go way back, working together for half a century. Inside the winery, there are thousands of dollars worth of the finest French barrels, from Damy and Billon, all to ensure the complexity and finesse Beauregard has his sights set on.

Greg Freeman at Chalone says harvest is now half over, as the Pinot Noir is all in.

“Chardonnay is starting to come in thick and fast,” he says. It’s his first harvest at the property. Nearby, Michael Michaud has picked most of his Pinot Noir, some of it for David Bruce Winery, as well as his Chardonnay.  He still had some fruit available to sell.

David Baird of Folktale says harvest started with Chardonnay from Brosseau Vineyard in Chalone, and pulled in 8 tons of Tondre Pinot Noir from the SLH, followed by another 11 tons of Pinot Noir from various places in the region. He’d also gotten some Chardonnay from Masa Vineyard up in Cachagua for his orange wine project. “It’s been five years now that I’ve been doing the solera blend! I can’t believe it. I’ve got that Chard in concrete right now and then it will go into barrels. This was one of the wines that started as a completely whacky idea that really caught on.”

Next up he expected a load of Verdelho from Clarksburg for his first attempt at a Vino Verdhe wine, which he will bubble up with a good amount of Co2 and put in crown caps. He expects that might be ready by December. His Pet Nat of Grenache Blanc is so popular, he’s planning to make twice as much as last year. It will be disgorged and then released probably next summer. Also fermenting in the winery is Sauvignon Blanc from Mark Chesebro’s Cedar Lane Vineyard, and a rosé of Pinot Noir. Both will be bottled in December.

Baird has already picked a very small amount of Malbec from the Masa Vineyard. “The place is so dry, the vines are really putting out a very small amount of fruit, probably ¾ ton per acre. They have maybe 5 tons total.” He says Ian Brand is working with Lorie Masa to sell the fruit. “He’s got some really great winemakers from around the state,” says Baird. “Raj Parr just got ½ ton of the Malbec.” He expects to bring Cab Franc in any day, and about 7 tons of Cabernet Sauvignon by the end of the month, along with Petit Verdot for a Bordeaux style blend.

Ryan Kobza, who works with Ian Brand at his custom crush facility in Salinas, says they are in the thick of it, with about 25% of their expected fruit brought in. For his own label, he told us, “I’m making the same two red wines (rosé of Mourtao and his ancient vine field blend of Cargignan, Mourvedre and Zinfandel) and I’m bringing in Riesling (from Redwing Vineyard in Santa Clara). I’ll be making pet nat, sparkling, piquette and still wines from the Riesling, so lots going on there. Hoping to have some of the bubbles ready for action come springtime.”

At Morgan, winemaker Sam Smith said they had just brought in Rodnick Pinot Noir from the Chalone AVA, that will go into the final blend of the Twelve Clones Pinot Noir. They also brought in some Tondre Chardonnay, but were waiting on the rest.

Wrath is knee deep in harvest as well. Michael Thomas shared, “So far, we’ve brought in our early pick Sauvignon Blanc: that’s pretty standard timing for our vineyard. This year had been running about 2 weeks behind because of the early cool temps and extra fog, but has caught up to what we consider ‘usual.’”

About the crop at San Saba, he said it’s been a really good growing year. “Everything is looking good, we are excited to say.” We wondered if they’d be making Boekenoogen Pinot Noir, again, as it’s a crowd favorite. “Yes, that’s the plan unless there is a last minute change,” Thomas told us.  “We had to skip last year because of the fires, but Boekenoogen is one of the most popular of our Single Vineyard bottlings, so we look forward to it every year.”

We’ll take all the good news we can get, and hope for a boring rest of harvest.