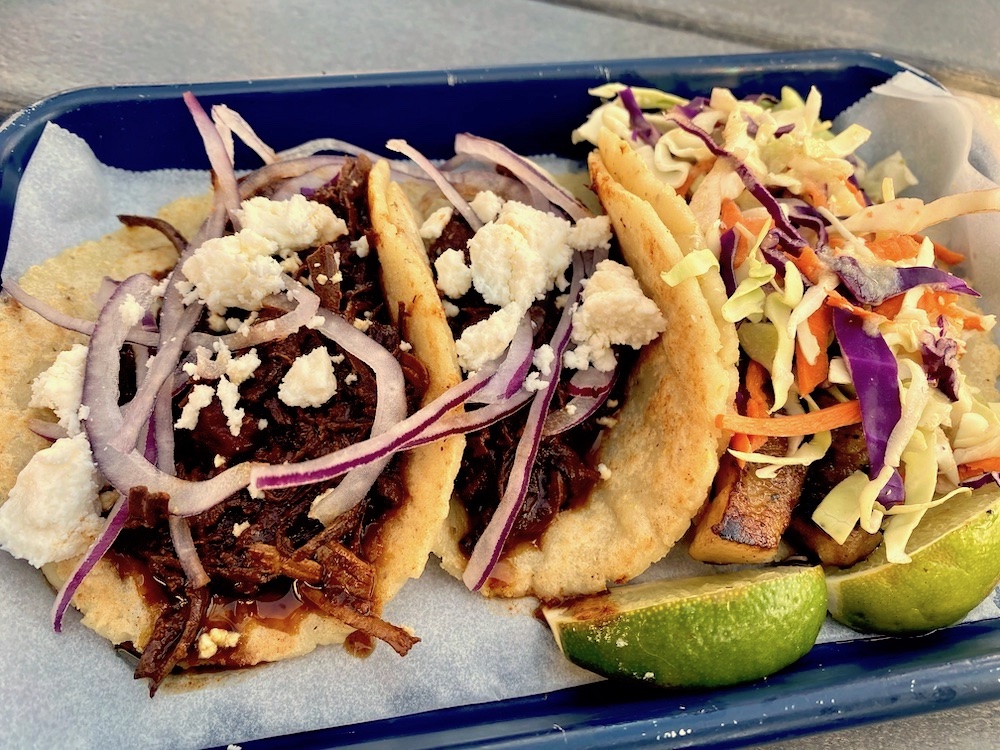 November 17, 2020 – What was once strictly a brewery hangout scene, with pub food and a woefully aging and worn interior, is now a spiffed up, energized spot for socializing. With oodles of outdoor space, Seabright Social can seat over 75 comfortably outside under its heaters and around cozy firepits.

Co-owners Jon Bates and Jason and Keiki McKay have put a lot of elbow grease into cleaning and updating this place, down to the studs. They took advantage of the lockdown in the spring to execute the full remodel they had planned to do this fall. Bates, who got his start in hospitality at Chez Panisse and Oliveto, recently worked at Soif in Santa Cruz. The McKay’s are longtime local residents—Jason grew up here and Keiki, who was born in Hawaii, graduated from UC Santa Cruz and never left. The couple also owns Cantine Winepub in Aptos.

With a recent rollout of Seabright’s fall menu, we were invited to peruse the new additions, which include roasted winter squash soup with crème fraiche and chives, and eggplant Parmesan. Chef Allen Constant fries the eggplant nicely before layering it with fluffy Parmesan cream sauce and mozzarella. We also tried the crispy calamari with chili lime mignonette (really good!), and thought about the grilled street corn. Get it while you can!

The new street taco trio features housemade corn tortillas with sufficient heft to accommodate the generous fillings like shredded chicken mole, pork belly, beef asada or battered rock fish. These are definitely a meal for the hungry. Baked mac & cheese with toasted breadcrumbs can be tarted up with Bolognese for an additional $5, and seafood lovers will want to try the fish and chips, made with locally caught Pacific flatfish, a relative of the flounder.

Slow braised boneless short rib with red wine sauce over mashed potatoes and swiss chard is among the heartiest dishes for fall—and a favorite of Bates. It requires a splurge for a Kathryn Kennedy “Small Lot” Cabernet. For those more into salads, there’s grilled rock cod on romaine, a Cobb and a veggie bowl. Shrimp po’ boy with Old Bay aioli is new, and comes with shoestring French fries. These are handcut from russets, blanched and then triple fried for tenderness in rice bran oil. Nothing frozen in our kitchen, says chef Constant, who also helms the kitchen at Cantine.

One of his favorite fall menu stars is mushroom lasagna, layered with fresh pasta, Parmesan cream sauce, ricotta and wild mushroom Bolognese. Ask Bates about the mushrooms, and he’ll launch into a tome about his forays into the wilds to sniff out his favorite fungi, which include chanterelles, porcini, morels and lion’s mane, among many others.

“I grew up in an Italian household, I’ve been working in the kitchen since I was a kid and foraging forever,” he told us. “There are so many great sites for wild mushrooms locally. We are very blessed.” Like any fungi forager worth his spores, though, he demurred on specifics.

What he will get very specific about, however, are the sources of the many great wines he has added to the list, most of which are local. The by-the-glass selection —served in really classy stemless ware—are all poured from kegs to preserve freshness. You’ll find Le P’tit Paysan Rose and La Marea Albarino from Ian Brand, Alfaro’s Rosella’s Chardonnay, Santa Cruz Mountain Vineyard Grenache, Windy Oaks Syrah and Bottle Jack Zinfandel, at the moment.

The bottle selection reflects Bate’s love of the international, honed over years working as a wine broker. You’ll find a lovely Alsatian Gruner Veltliner along with Kathryn Kennedy Sauv Blanc and a Vermentino from Italy, a Thomas Fogarty Langley Hill Chardonnay side by side with a Les Belles Roches white Burgundy. For reds, there’s Melville Pinot from Santa Rita Hills alongside Pinot Noirs from Samuel L. Smith (Monterey) and Split Rail from Sante Arcangeli (Corralitos). Spain (Garnacha), Argentina (Malbec) and Italy (Nero Mascalese and Barbaresco) show up for the party as well.

Nope this isn’t the old Seabright.

But, there is still beer, brewed by master Peter Landman, who turns out Beer Glider Pilsner, Pelican Pale Ale Triple Rick IPA, Purrfect 11 Red IPA and Oatmeal Stout. The latter shows up in a brownie for dessert, or floated atop a Bloody Mary, featuring a housemade mix that is studded with pepper and horseradish, making it a pretty stout meal unto itself.  Also made in house are seltzers, like The Sheriff, with passionfruit, blood orange and guava.

Don’t forget the cocktails, like Seabright Lemonade and the good old fashioned Social Sour, made with rye.

As we finished off our tacos, a couple of guests who had been enjoying a beer and some snacks, walked by as they were leaving and asked Bates if he was one of the owners. Met with an affirmative, the man said, “I figured so!” as he exchanged elbow bumps with Bates. “You greeted us and took the time to thank us for coming in when we got here. We just wanted to say we appreciated the gesture. That means a lot.”

Hospitality. Pass it on. Socially responsibly, of course.