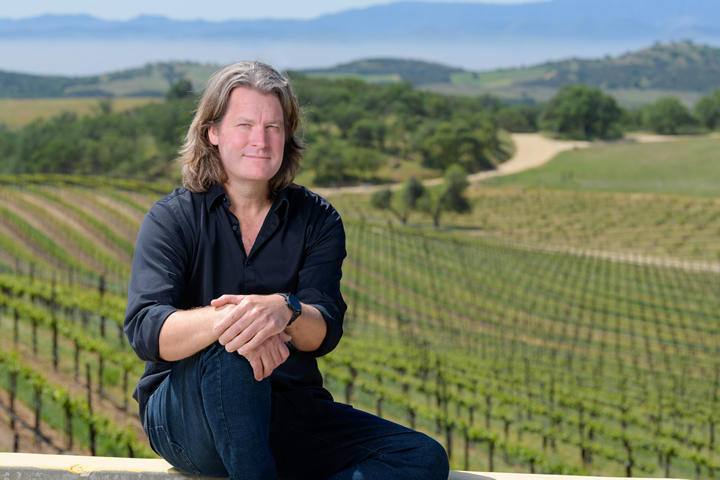 May 7, 2021 – It’s been a long journey coming home for Greg Freeman, who was recently named winemaker at the venerable Chalone Winery, and it feels like redemption. His 20-year career in wine has now entered what he hopes will be its most creative phase: one in which he can pursue his style and make the wines he’s always dreamed about.

Freeman, a Houston native, began his wine journey after college by working as a backcountry snowmobile guide by day and chef by night in Crested Butte, Colorado. Wanderlust and a love for the outdoors took him to Eugene, Oregon, where he worked in restaurants, and later as a commercial salmon fisherman, also serving unofficially as the ship’s cook.

Then he decided to put his college degree in microbiology and chemistry to work at scientific laboratories in his native Houston, followed by Santa Fe and New Orleans. While in New Orleans, he moonlighted in bartending and restaurant positions, where interacting with fine wine collectors heightened his love for wine.

Freeman’s official wine career began when he joined Hahn in 2003 to upgrade the winery’s lab capabilities. It would prove a most fruitful relationship. Working with the late Nicholas Hahn and director of winemaking Paul Clifton was an outstanding experience.

After 14 years as winemaker at Hahn, Freeman felt the pull to explore new opportunities. “I needed freedom, a chance to explore. I had a great job at Hahn. Paul Clifton is great to work with, and Nicky and his entire family were wonderful, lovely people, and the whole place just kicks ass. But I felt the urge for something new.” An offer from Constellation to work in their Gonzalez facility lured him away. Sometimes those enticements are like buying into the promise of pretty photoshopped pictures on frozen dinner packaging. They look far more appetizing than their reality.

After a very long year, he was recruited by Messina Hof, the third largest winemaker in Texas, where he made 33 varieties and 95 SKUs, among them sweet Riesling, which was made by dumping pallets of pure refined sugar into tanks of Riesling to make the Lone Star equivalent of sweet tea. He was flabbergasted. One year of that was way plenty. Plus he really missed his young daughter in Carmel Valley.

Back he came, needing a job and finding himself at Georis/Cowgirl Winery, where he spent two years, including 2020, which made two things very clear. The first was that if he was going to have his salary cut in half due to the pandemic (it was), he needed to have his work hours equally adjusted. The other was that he needed something more fulfilling in life. Those who know Freeman from his FB or IG posts know that he spends as many evenings as possible out on the sands of Carmel Beach, playing his repertoire on the bagpipes.

“I’ve been playing since I was a kid, with a 30-year gap. About 15 years ago, I started playing haphazardly. Before the pandemic, I had started playing guitar at a place in Carmel Valley. That came to an end with the shutdown. One day, I walked out to the end of my driveway and started playing the bagpipes. Dogwalkers started lingering to listen and they began to give me tips. I started to think, this is great, but I need to be in a place where there are more people if I am to maximize this tip thing!” One thing led to another, and like the pied piper, he eventually figured out that being on the beach, playing his bagpipes at sunset, was the way to go.

He’ll continue that as long as possible, but his energies are now devoted to what he hopes will be the most creative phase of his life. One in which he can pursue his own personal style of winemaking.

When he started his new job on March 10, 2021, at the historic Chalone Winery, deep in the sandy hinterlands adjacent to the Pinnacles, he felt a sense of renewal,  of promise and possibility. “I feel that I’ve finally arrived at a spot in my career where I can make decisions about everything: barrels, picking, and when I bottle. I’m so thrilled at the opportunity to work at such an historic place that holds such an important place in the legacy of California winemaking. We are lucky to have such an incredible vineyard manager in Richard Bohr. The vineyards are immaculate: every vine looks perfect.”

Freeman inherited a cellar full of wine, (including the remains of the disaster that was 2020, all of which has since been bulked out), along with two amazing longtime employees. Other than that, he had to start over and hire all new staff. He now has a core team of five and they are eagerly setting up for what he hopes to be the chance to craft the wines he’s always hoped to make.

“I’ve already arranged bottling for the new vintage (2021) of Pinot Blanc, Chard and Chenin Blanc for next March,” he says with cautious optimism. “Making wine from this amazing place should be straightforward. I love making barrel-fermented Chardonnay and Pinot Noir! Can’t wait to do Pinot Blanc in tank. Plus I love Grenache and Syrah from this property. This place should be a winemaker’s dream.”

Add a scoop of optimism to two scoops of reality, and we’re almost there. Cue the bagpipes.

2020 Sante Arcangeli Rosé of Pinot Noir ($25) – Pure essence of Pinot Noir, made of fruit from both Lester Family and Saveria vineyards, which are across the street from one another. You’ll love the vibrant salmon hue and engaging wildflower and peony scents. It’s the kind of rosé you can drink all day, as it easily transitions from a wakeup call at brunch, through an afternoon of noshing on crab dumplings to the shrimp and mango salad lettuce cups for dinner.

2019 Sante Arcangeli Split Rail Pinot Noir ($36) – Delicate floral aromas, like iris and daffodil, plus mountain strawberry, savory underbrush, enoki mushroom and a smidge of earth set the stage. There’s a hint of sea fog as well. Translucency and pale pink-amber color, establish this as a delicate and ethereal, yet complex style of Pinot Noir, that dances between rhubarb pie and a savory truffle risotto, with the deftness of a ballerina. It’s savory and wild: just a brilliant execution. Bring on the duck!

2018 Albatross Ridge Estate Pinot Noir ($68) – Redolent of a blackberry bushes in the summer sun, baked apples and warm forest in August, this wine bursts onto the palate with flavors of oven-fresh blackberry pie, cassis, cherry, cinnamon, nutmeg, along with a touch of warm cedar. Smooth and lovely in every corner of your mouth, the deft acid endows this handsome wine with fervent pace and boundless energy.