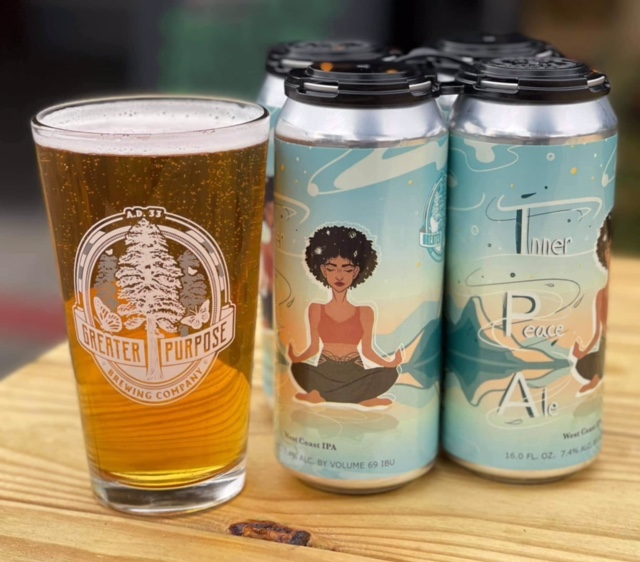 February 2, 2021 – It took a long three years for Greater Purpose Brewing Co. to find its home, but after a series of trials and tribulations, the miracle has occurred.

Greater Purpose is getting settled at the former East Cliff Brewing Co., on East Cliff Drive near Portola and 17th in Santa Cruz, and now that the state’s stay-at-home order has been lifted, business is strong and demand for its new outdoor beer garden is booming. The crew there is getting down to business—working on new handmade craft beers and ales, and introducing regional shipping and home delivery from Ben Lomond to Watsonville.

The brewpub—a project of Greater Purpose Community Church that will generate donations for nonprofits—has been in the works since 2018. “We’ve spent three years on a sea of bad luck,” says church pastor Christopher VanHall, who has been helping drive the project forward.

First, the original location in the former Logos Books space didn’t work out. Then, the pandemic delayed escrow on the East Cliff space. And just days after Greater Purpose Brewing finally opened for business at the beginning of December, the state issued a new stay-at-home order.

Yet Greater Purpose has persisted, continued to sell beer takeout style during the past two months, and as of last week was finally able to open up outside. “To my amazement, we’re functional and breaking even, or in the black,” says VanHall.

Originally, as EMB reported two years ago, Greater Purpose was set to take over the iconic Logos space in downtown Santa Cruz and convert it into a restaurant and brewpub. The church had garnered national publicity for its blending of beer and fellowship, with homemade ales and other beverages made available to the congregation. Members wanted to take it to the next level by creating a welcoming place where those brews could be served to the general public.

But early demolition for the remodel revealed a serious issue: old plumbing—specifically the discharge line—would not be able to handle the demands of the restaurant and brewery. Having to replace it would have dramatically increased the cost of the remodel, the pastor says, leading to a heartbreaking decision to pull out of the space and look elsewhere.

“We had the furniture picked out, our colors picked out,” says VanHall, who describes the setback as “a blow.”

The word spread that Greater Purpose was still looking, and this eventually reached the ears of East Cliff Brewing Co. owner James Hrica, who coincidentally was contemplating retirement, but did not want to turn over his brewery to just anyone. He wanted someone who was willing to keep making his cask ales and English-style ales, and Greater Purpose was perfectly happy to keep doing that.

“He gave us all their recipes,” says VanHall, noting that he’s a big fan of Hrica’s creations: “He makes the best Irish red I’ve ever had … it’s the only local brewery that I know of that does cask ales and hand-pumped traditional ales.”

Hrica not only gave Greater Purpose his blessing, but also his support. The former owner “comes by, hangs out and has a pint with us,” says VanHall, and lends his expertise from time to time.

The East Cliff location has turned out to be a blessing in disguise. A smaller space to deal with, without extreme remodeling costs, made it a more reasonable project from the get-go. “It’s been more in line with our original vision,” says VanHall. And, he says, “The team we inherited is amazing.” A group of managers is running the brewpub and VanHall is officially a part-time marketing director.

Now the brewpub sports new paint, light fixtures and artwork on the inside, and Greater Purpose’s monarch butterfly and redwood logo on the outside. The tap room also has a marketplace vibe, with Greater Purpose four-packs and swag can be found for sale, in addition to partner products such as 11th Hour Coffee, which is used in brewing Miss Molly’s Stout, a Greater Purpose original. Other beers and ales include That’s No Moon, an Imperial black IPA; Make Like a Tree, an Irish red ale, and Inner Peace Ale, a West Coast IPA.

New brews are now fermenting under the watchful eyes of brewers Seamus Mooney and Mike Kostowskyj, with seasonal and experimental offerings to rotate in and out of the regular lineup, with three to five on tap in any given week.

During the stay-at-home order, sales were strictly takeout, but now customers can enjoy the beer garden, where they can sip at socially distanced picnic tables and enjoy food from neighboring restaurants and food trucks. Greater Purpose is setting up a contactless ordering system so that both beer and food can be ordered and delivered to the table.

The brewery/church has just taken over the next-door space, recently vacated by a gem shop, which will become a barrel aging room and future event space—when events are once again a thing.

As originally promised, Greater Purpose will donate between 30-60 percent of its profits to worthy causes, including Save Our Shores, Planned Parenthood, Homeless Garden Project, the NAACP and the Diversity Center of Santa Cruz.

“After all we had been through with Logos, another shutdown was incredibly frustrating, although we did understand it was necessary,” says VanHall. “Now that it has lifted, we are doing well again and we feel like the sky is the limit.”