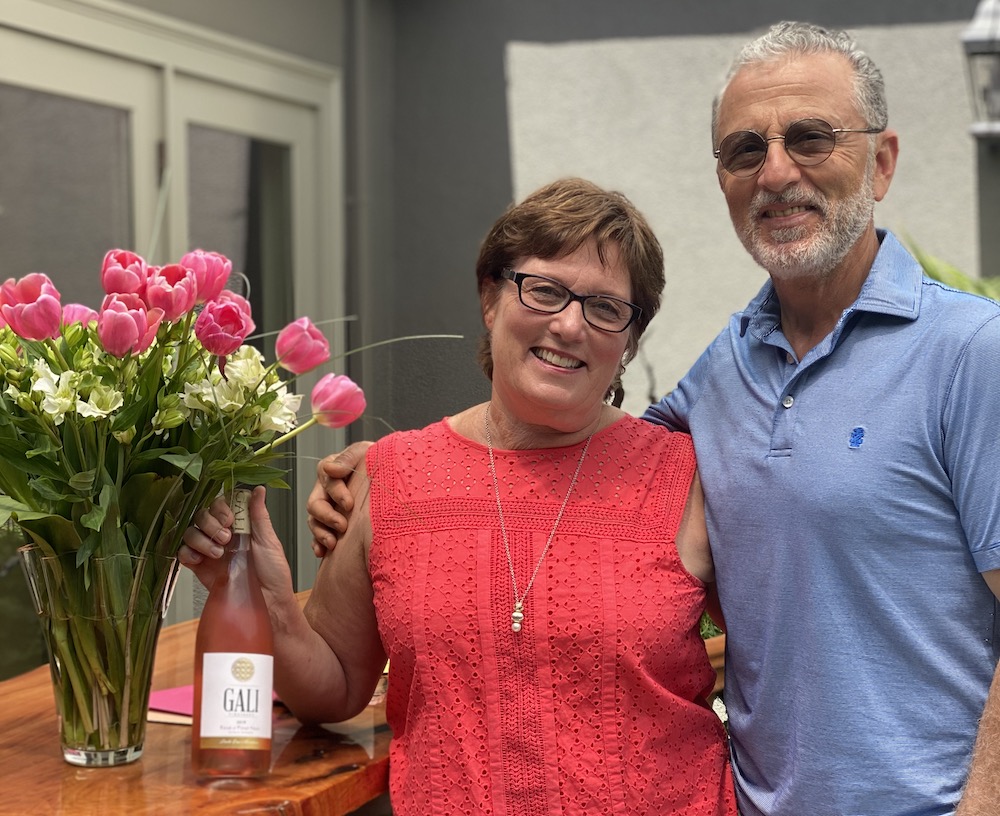 February 16, 2021 – Janice Gali looks fondly back on the era of blueberries, when she and her husband, Dr. Joseph Gali, a pediatrician by trade, and a farmer at heart, cultivated eight varieties of blueberries on their farm in Watsonville. That was back in the day when their two young daughters, Helena and Madeline, would help with picking, transporting and selling at Farmer’s Markets. “Those blueberries were unbelievable!” says Janice. “We loved selling them: it was a family operation and people loved seeing us every weekend in San Francisco and Los Gatos. It was a great experience in that it taught our daughters what it is like to run a business, serve the public and what it feels like to be a farmer. We would bring huge baskets of those amazing blueberries to swim meets, and the girls would eat them by the handful!”

But, blueberry farming is very labor intensive. “You have to pick each berry individually, and with our daughters about to go off to college, it just didn’t make any sense any more.”  They began to ask themselves what life might look like after blueberries.

When the couple originally purchased the land back in 2003, they kicked around the idea of grapes, but Joseph wasn’t convinced of their economic viability at that time. But the Santa Cruz Mountains AVA had grown in stature and significance during the blueberry years, and the price per ton for Pinot Noir and Chardonnay began to look attractive. So, it was out with blueberries and in with vines.

Before planting, the couple consulted with local viticulturist, Prudy Foxx, who helped them decode the soils and match appropriate rootstocks, which they sourced from Sunridge Nursery, along with the bench grafts for the 12K vines that were installed on ten acres in 2013.

They planted the usual suspects: Pinot Noir, Chardonnay and Syrah. But, says Janice, “Joseph had been doing a lot of research and was intrigued by a Spanish grape called Tempranillo, which thrives in a climate similar to our spot near the coast. So, we decided, why not?” Good thing they did, because their Tempranillo is a hot commodity with the winemakers that purchase their fruit and it’s a best seller for them under the Gali label.

Although they offer a dark-fruited Pinot Noir and orchard-fruit laden Chardonnay, along with a Rosé of Pinot Noir under their label, they are increasingly leaning towards Iberian varietals as their differentiator. They recently planted Albariño, and are eagerly looking forward to that block coming into production.

Born in Antioch, Turkey, Joseph grew up tending his Uncle’s orchard on the Mediterranean coast, and had always longed for a piece of land where he could grow all the foods of his youth. That Garden of Eden kept beckoning. Living in California has allowed him to cultivate blueberries, persimmons, kiwis, apples, quince, mulberries, and honey from his many beehives. He gets great pleasure in cultivating the vines and spends many long hours in the vineyard, treating each plant as he would a beloved patient. For him, being a doctor and a farmer are one in the same: you are caring for a living organism that needs just the right amount of input.

Yet, all the care in the world for each vine cannot guarantee you a great bottle of wine in the end. So, choosing the right partner to shepherd the fruit through the fermentation process is critical. Their connections in the local winegrowing community led them to Tony Craig, a British Shakespearean actor who began his career in winemaking as a cellar hand at David Bruce in 1991. Eventually, he became head winemaker there, until an internal cataclysm led to his sudden departure a dozen years later. (Read more on Tony Craig in our story here.)

Craig has been making wines at Savannah-Chanelle for nearly two decades now, winning them many awards, including multiple Golds for the Tina Marie Pinot Noirs over the years. He also has his own label, Sonnet Cellars, an homage to his stagecraft. In 2016, Craig’s 2013 Sonnet Cellars Tondre Grapefields Pinot Noir took Red Sweepstakes Winner (Best Red of Show) from among 7,164 entries at the 2016 San Francisco Chronicle Competition.

The Gali’s began working with Craig in 2016, when he came to them looking to purchase some Pinot Noir and Tempranillo from their newly established vineyard. Knowing his reputation, they asked him to make their wines. It’s proven to be a great partnership. Although the majority of their grapes are sold to other producers, Janice and Joseph keep 10% of the crop for their own wines, which are produced at Jerold O’Brien’s Silver Mountain facility, where Craig also crafts wines for Silver Mountain, Tondre and Sonnet Cellars.

Currently available are the 2017 Gali unoaked Chardonnay, the 2019 Pinot Noir Rosé, 2016 Pinot Noir, 2016 Syrah and 2016 Tempranillo, all of which have performed admirably in wine competitions. You can purchase these wines online, and you’ll find them at select restaurants and wine shops, including the Summit Store.

Janice, who used to work at the joint Ser/Silvertip tasting room in Saratoga, hopes to have a tasting room of her own one day. Meanwhile, to set up a private tasting appointment, email: galivineyards@gmail.com

Although she still misses the taste of those plump blueberries, she’s pretty happy to pour herself a glass of rosé at the end of the day. And Joseph likes nothing more than to be among the vines.