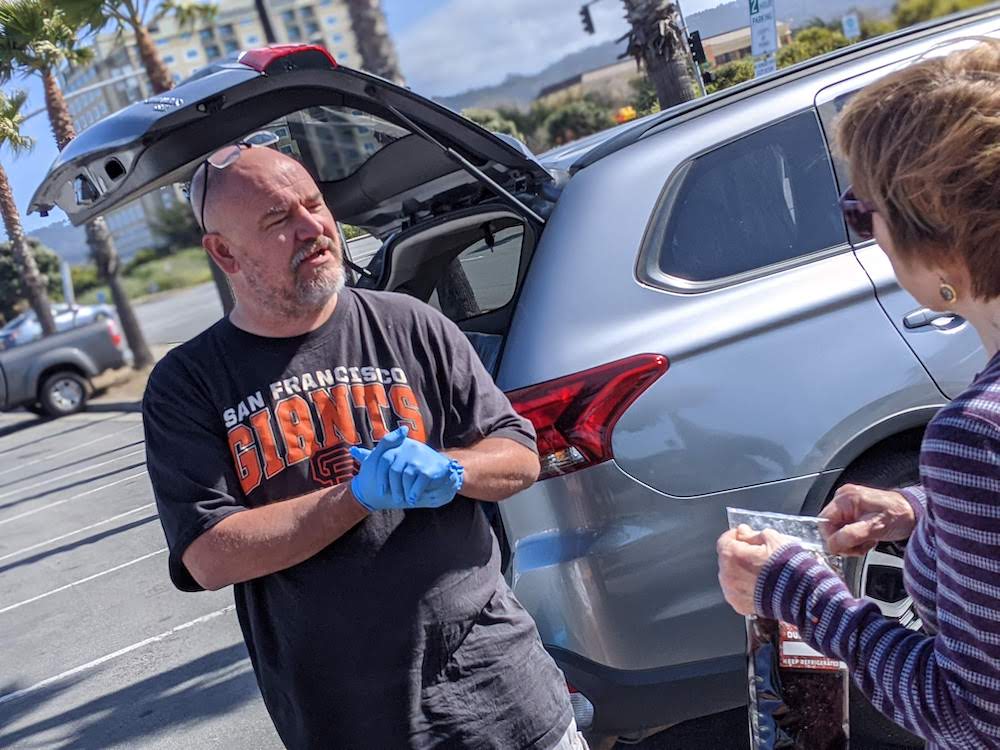 But more than anything it’s a story about hope for ocean health and existential hope in general, smart synergies, and the beautiful things that can happen when things work together, particularly in times of distress.

A simple ritual unfolds 4pm every Friday in the corner of the Home Depot parking lot in Seaside. A trickle of vehicles steers through the mostly empty southwest end of the lot and parks. Drivers emerge and, keeping their distance best they can, receive two plump pouches of seaweed in sea water from the fully outstretched (and gloved) hands of Dr. Mike Graham, along with a two-sided cheat sheet stuffed with recipes and all sorts of information.

Last week the people making pilgrimages for these 1-pound bags of red dulse and green sea lettuce included a Michelin-starred pastry chef, a celebrated executive chef, a Blue Ocean Institute official, a Monterey Bay Aquarium admin and a nice older gourmand who just really loves eating seaweed. The cheat sheet included advice on storing, removing, prepping, blanching and frying the two seaweeds; notes on the two strains’ characteristics; nutrition facts (hint: they are really good for you); and recipes ranging from pickled seaweed salad to seaweed tapenade, with one for sea lettuce brown butter from the best restaurant in the vicinity (Carmel’s Aubergine).

Graham is director of research and development at the Moss Landing Marine Lab’s Center for Aquaculture, which is a lot of work in more mellow times, and it’s far from his only endeavor. He’s also editor of the world’s top scientific publication on seaweed and algae (Journal of Phycology), the most quotable voice on kelp when the media and government come calling, and one-time Marina Man of the Year for work leading organizations like Marina Youth Soccer Association and Marina High Parent Teacher Student Association. With MLML’s blessing, he started Monterey Bay Seaweeds with his wife Erica and eldest son—one of their eight kids—in 2012, building out ocean-fed above-ground tanks packed with flourishing seaweeds. Sales started a half decade back.

They usually buy out his inventory in a blink. But almost 100 percent of those destinations are 100 percent closed at the moment, likely for weeks, if not months.

That’s not stopping the kelp from growing, however, and if Graham doesn’t harvest it on schedule, the MBS tanks will overcrowd and his colonies will crash.

The thing that makes that all the more crazier at this particular moment: While seven of his kids are quarantined with his wife at home, zero of them—including the two who started the company with him and are employees of Monterey Bay Seaweeds—are allowed to help him tend the tanks. State rulings on who is exactly essential say he’s the only agriculture worker who can come in.

So Graham is busy. And sitting on a surplus of seaweed. He and his wife have decided to give it away, her via walking deliveries around their Marina neighborhood and him to anyone who texts him and meets in the Home Depot parking lot on Fridays. He’s a down-home dude like that. He’ll also mail seaweed free for anyone who’ll pay shipping. His number is (831) 224-3444.

The coolest part of this story is not the tasty things that can be done with the dulce (rhymes with pulse) and sea lettuce Graham is handing out for free—though that is cool, and I have more on that in a second. Instead it’s the things Graham and his team are doing besides farming seaweed for fancy chefs.

For one, they serve as the hatchery and nursery for Monterey Abalone Company, another chef darling. The two entities are collaborators on a National Oceanic and Atmospheric Administration-funded project that raises their two organisms together—wherein abalone excrement feeds the seaweed and the seaweed filters the water for the abalone. Win win. “It’s more holistic, in a vague sense,” Graham says. “They’re sharing resources. We call it integrated. This is a new way to do it.”

A purple hinge rock scallop hatchery development project is in full effect in the same facility, under guidance of the only other human allowed in during shelter-in-place—albeit part-time only—California Sea Grant Extension Specialist Dr. Luke Gardner. The lab/farm normally has five staffers.

Another inspiring mission aims to rescue kelp itself, namely giant kelp and bull kelp. Purple sea urchins, liberated in part by a mass die-off of their primary predator (sea stars), are ravaging kelp, particularly in upper Northern California. Urchin fishermen can collect them, but they aren’t of much value because they’re somewhat starved and low on uni. As part of yet another study, Graham is taking them and figuring out how to fatten them up with his resident kelps and algaes. Aubergine’s award-winning chef Justin Cogley is even testing different seaweed diets to see which result in more flavorful uni. (He prefers ogo-fed.) It’s more synergy—protect the kelp forest, ranch sea urchins for local kitchens, generate small business.

Elsewhere in the lab, white abalone—themselves in so much trouble they’re the first marine invertebrates to be tagged endangered—are being cultivated from spawn stage to adult with the idea of reintroducing them in Southern California, where populations have plummeted. Graham hopes to raise 100,000 within several years.

A final project of the moment is simultaneously the ugliest and most attractive. Funded with a grant from La Jolla-based California Sea Grant, MLML is aiming to develop a sustainable version of unagi, or eel, which is wildly popular in sushi restaurants but as about unsustainable as it gets to harvest. (Wild eel populations are very endangered and existing farming practices depend on wild fish for feed, which triggers a whole other cascade of problems.)

The key that unlocks the possibilities is the famously unattractive monkey-faced “eel”—which is actually a long eel-like fish called a prickleback. The monkey-faced prickleback is vegetarian, a big fan of algae, and, when smoked correctly, tastes just like unagi. Dr. Scott Hamilton of the Moss Landing Marine Labs is working on how to raise them in captivity and feed them an entirely farmed diet.

“It can have a global impact with California values,” he says. “Green seafood for the planet.”

There are things that will emerge from this crisis that we can’t predict. That’s a big piece of what makes it so harrowing and, potentially, hopeful.

One item I wouldn’t have predicted to emerge as recently as last week: seaweed guacamole. But sure enough, after meeting up with Graham last week, that was the star of my recent quarantine menu. Straight from the bag, and shredded raw, it worked deliciously, the dulce’s savory saltiness providing all the sodium the avocado needed. With a half lemon’s worth of juice, the guac was a three-ingredient hit. Better yet, the dulce packs superpower-grade nutrition and couldn’t be any fresher, since it’s literally alive in the bag of sterilized sea water in my fridge.

I also low-and-slow-roasted some in the oven and added it to the second course, spicy chicken tacos. Baked, the dulce took on a more mellow taste and toothier texture.

Next time I play with dulce I’ll try frying it, which is what many feel gives it a bacon-flavored effect. My next seaweed meal, though, will feature sea lettuce, which swaps in smoothly for spinach or kale and does best blanched or dried. Drawing from the cheat sheet, I’m thinking sea lettuce brown butter to then use with my bunker’s stash of potatoes, or maybe the garlic- and shallots-spiked seaweed tapenade with roasted vegetables. Graham recommends the pickled seaweed salad.

With unlimited servings of uncertainty in the pipeline, it’s comforting to look forward to a reliably fresh and tasty meal—and to have real hope of healthier outcomes for marine species in trouble.