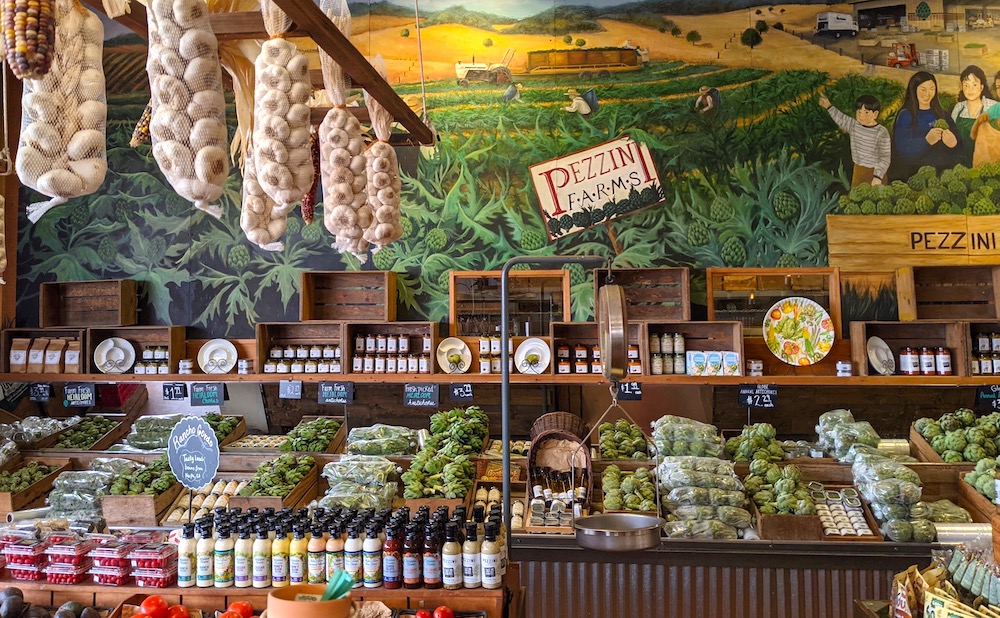 September 3, 2021 – A ways back a clever California promotional idea hit radio airwaves. It introduced a 2013 vote on what should be the state food, put to the public by recently elected Lt. Gov. Gavin Newsom. For what it’s worth, it cost taxpayers nothing.

Many entries proved formidable, including sourdough bread—for my tastebuds the best bread style on the planet.

Avocado made a compelling case, what with its presence in California rolls, California chicken sandwiches and California salads, and perhaps its appearance on the handy healthy eating list The Clean Fifteen.

Dungeness crab deserved a long look for me, as it might be my final meal if I get to pick. Maybe I’d request it combined with avocado in Passionfish’s crab tower, a compact and photogenic carousel of fresh, light, rich, soft and textural flavor.

But in the end I had to campaign for artichoke, partly out of loyalty to Monterey Bay and the Artichoke Capital of the World (Castroville), but mostly because I’m obsessed with its earthiness, hardiness and uniqueness.

I love it in soups, salsas, dips and simply rapid-fire, hand-to-mouth with garlic aioli after a simple steaming. I recall family dinner rituals centered around dividing the heart democratically. They’re fun and easy to grow in home gardens.

I’ve acknowledged my own artichoke fixation in past reports. The more I think about it, the more all people should share such an obsession.

Edward Weston’s famous bell pepper photo is sexy, but let’s try turning the lens at the thistle that (on theme) earned Marilyn Monroe her start as the first queen of the Artichoke Festival (when she was Norma Jean Mortenson).

We talk about peeling away the layers of an onion in getting to understand someone or something special, but there’s no payoff close to an artichoke heart.

“It’s the only vegetable in the world that has this flavor, color, texture…especially when fresh,” he told me. “There are substitutes for other vegetables, but not for artichoke. It’s like truffle, saffron or caviar, only not as expensive.”

When it comes to great places to get it, there are ample candidates in the Monterey Bay area.

My top vote: a spot nestled amid artichoke fields just off Highway 1 in Castroville: Pezzini Farms.

The Choke Coach food truck anchors there and fries up hearts that 1) rival any in the area and 2) have drawn waves of celebrity chefs whose photos wallpaper the north side of the truck. (They also do grilled artichoke, steamed artichoke, artichoke soup, artichoke po’ boys, artichoke wraps and more.)

But it’s a particular artichoke-related item that has me as happy as a bee in a blooming artichoke. (The purple bloom means it’s past eating time, but it creates a beautiful vision.)

I should disclose that it’s a little silly to select one item from a broad lineup like Pezzini’s. (Note the “atomic frog balls,” which are spicy pickled Brussels sprouts.) But that’s how much I’m into the Pezzini Artichoke Seasoning. It comes in a cute tin with the window on top allowing a peek at the savory—and savvy—blend. A tin runs $6.99 and lasts a long time since a pinch goes so far.

The label hypes it as something to “add to olive oil when dipping bread, or use when grilling fish, meat or vegetables…this spice adds zest to artichokes and just about everything else!”

If “everything” sounds like a reach, it’s not. I love it basic-like on fresh sliced heirloom or beefsteak tomatoes. It’s great on buttered sourdough toast, nothing more needed. It’s nice on avocado and I’d bet it’s delicious on crab too.

So maybe we should set aside any official food divisiveness. Because a Golden State super sandwich—avocado + artichoke heart + crab + sourdough, finished with the seasoning—would be a big winner on my ballot.