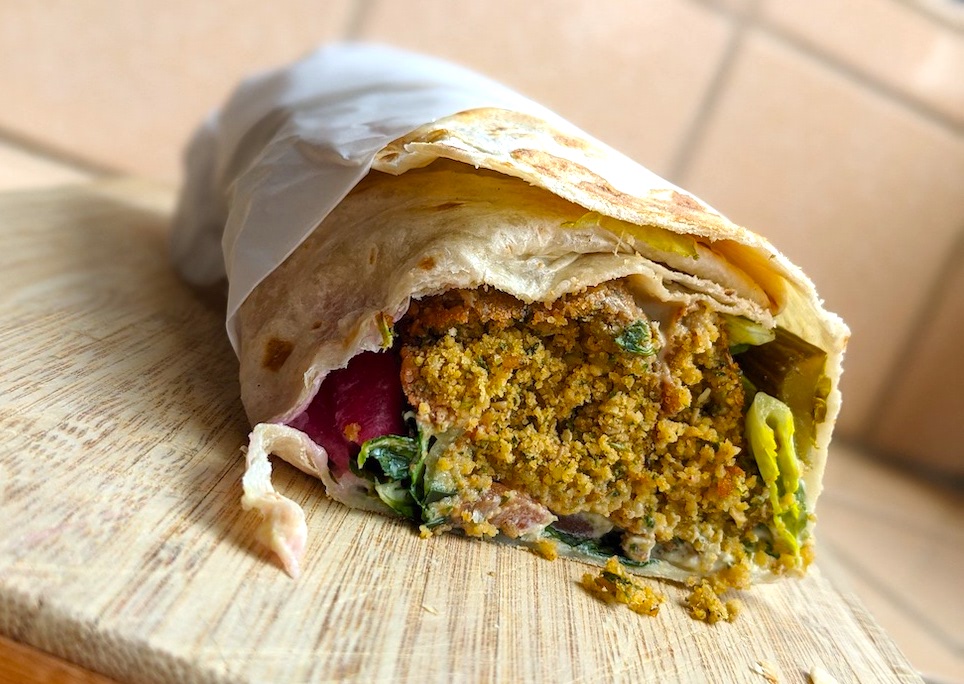 That makes it one of the best values in the tri-county area.

Extra tzatziki and tahini sauces are optional, but recommended—there’s a lot of garbanzo going on and it tastes best when those sauces help bring balance.

This story could stop there. One of the goals of this new column, now in its 11th installment, is to deliver delicious discoveries succinctly.

But there are some other flavorful elements at work that are worth mentioning with funky little Halal, which sits on Fremont Boulevard, smack dab in the middle of Seaside, conveniently located but chronically overlooked.

Hands-on owner operator Mike Bay makes everything by hand, with attention. (I heard him tell a client that while he’s away, he won’t permit anyone of his staff to chop the chicken in the humane Halal tradition because his process is that exacting.)

If you’re in a rush, it’s not your spot. But if you have a minute to spare, it provides a perfect opportunity to explore the intriguing inventory while he preps your plate.

There are pickled green mangoes and whole dried limes, bags of basmati rice and packets of imported olives, giant jars of ghee and pouches of Aleppo pepper, Laziza apple sodas and Bavaria malted grain drinks. I love looking over the bulk spices, canned roasted eggplant pulp, and various chilies too.

He’s a veteran of fancy kitchens, having worked for years in Hilton hotels across Canada. He migrated to San Francisco in hopes of graduating from its culinary school and opening his own restaurant. When he discovered he had all of the skills but little of the funding to complete the course, he went looking for a different project.

That ultimately took him to Seaside, where he learned the neglected Halal Market was for sale. He made a successful offer in 2018, restocked the shelves and introduced his homemade recipes for kabobs, gyros, falafel and more.

“I haven’t touched the menu since I opened,” he says. “The public saw the kind of food I was doing and supported me.”

There are other offerings from the modest little kitchen in the back with the basic chalkboard menu, where it lists items like beef shawarma platters with rice, hummus, tabouli and flatbread. I tried lamb-beef gyro carved from the vertical roasting spit, and it delivers an earthy and deep blend of flavor that’s lifted by contrast with sliced tomato and cucumber and fresh tzatziki sauce.

But I come for the falafel and eat it over multiple meals. There aren’t many places around the Monterey Bay Area that offer it, fewer that do it as attentively, and zero that bring it so big.