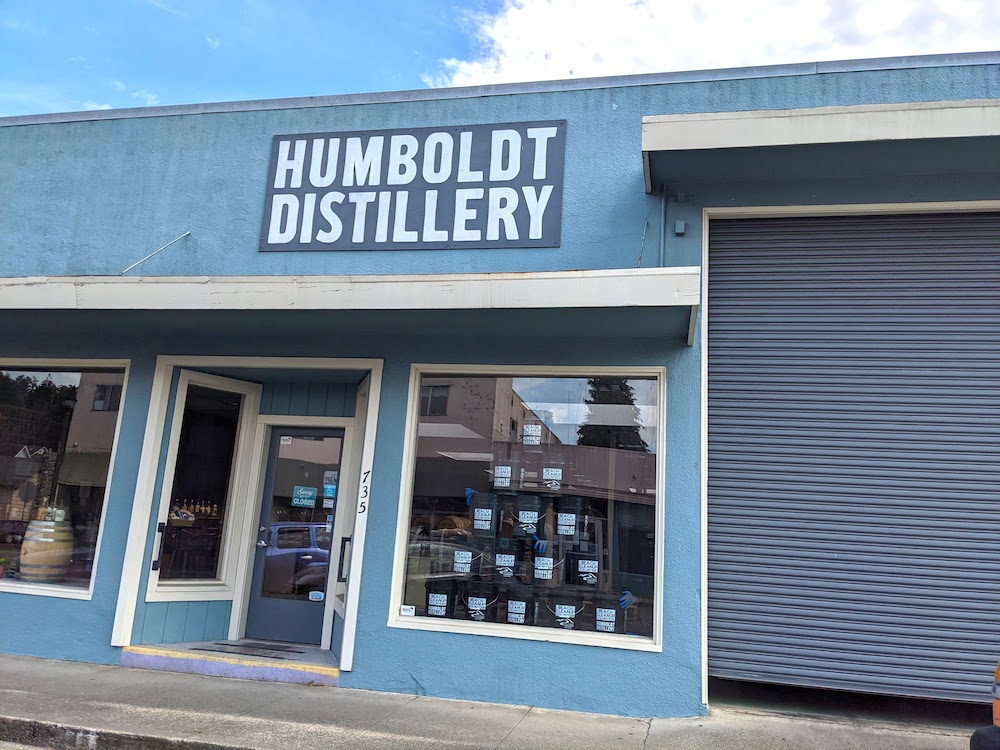 September 17, 2021 – The chemist who became a professional poker player—and ultimately an award-winning distiller—wasn’t looking to do hemp-infused vodka.

But oftentimes the best things in life are those we don’t see coming.

Abe Stevens is a native of Humboldt County, which also happens to be the home and heartland of the country’s best outdoor-grown marijuana. But that’s not the point.

I didn’t see it coming, but I met Stevens there, in Fortuna, population around 10,000, at his working distillery. It presents a straightforward blue-collar space, but not without a small and stylish corner dedicated to tastings (by appointment amid COVID), complete with an analog vinyl collection and vintage vacuum-tube player, assuming you’re up for the 327-mile drive from Santa Cruz.

One thing that catches the eye from the sidewalk outside is the pyramid of black buckets in the big windows. They read “Beach Cleanup Volunteer / California Coast Keeper Alliance,” a shout-out to the nonprofit partner that caretakes North Coast watersheds. The 5-gallon vessels represent one of a number of monetary and mindful contributions that the company makes.

For Stevens and his wife/co-owner Courtney, that action feels as organic as the sugar-cane juice they ferment. The oceanic movement echoes their familial crab-trapping and beach-combing, and helped inspire the crustacean on their flagship item, the best-selling certified organic vodka available in California (and one of the best-selling craft vodkas, period, in the state).

“I’m into clean water,” Stevens says. He rattles off various watershed thoughts I wish more Californians considered, and how it relates to Humboldt. A forest fact follows: The H2O from which the family’s spirits flow originates from old-growth redwoods. “After all,” he adds with a hint of a smile, “our product is 60 percent water.”

This blossoming endeavor came after Stevens tired of the geographic and mental miles of the card game hustle.

“I appreciated the mental stimulation and challenge, but once it became a source of income it became a job,” he says, “and a lot of hours sitting interspersed with adrenaline spiking and cortisol diminishing, it’s not the healthiest.”

With a newborn daughter in tow, Abe and Courtney hatched a new plan: Make Fortuna the origin of an upstart brand and a great place to raise a kid.

“Put my old chemistry training to use,” he says. “Create our own jobs in the process.”

The flagship spirit launched in 2013, when theirs was the only distillery in Humbolt county (four now, at last check) and before the craft distillery boom and shifting regulations trampolined operating California distillers from a handful to hundreds in the half decade since.

Stevens knew he wanted to do stand out spirits that could happen on a manageable timeline.

In the world of distilling, that means vodka—which doesn’t demand the time-intensive aging—and rum, as trends were zooming toward whiskey and rum was less competitive.

Bonus note: Since vodka can be distilled as easily from sugar cane as it would be corn, grapes or potatoes, he could make both spirits from the same source. (He protects his sugar sourcing for competitive reasons, though I will add I checked and they’re certified organic themselves, as part of the tedious but valuable process of earning that accreditation.)

“We’re an organic alternative to the mainstream,” he says.

Today Humbolt Distillery spiced rum puts Captain Morgan in its proper place (into the propeller), and is available at a bunch of places in Santa Cruz and beyond, like Shopper’s Corner, U-Save Liquors, Leo’s Liquors, and Village Bottle Shop. Larger operators likeTarget and CVS Pharmacy also stock it.

Mark Gonzales is the specialty beverage buyer for Santa Cruz Whole Foods, a carrier who features the original organic vodka and the spiced rum.

“It’s just been a staple in Santa Cruz,” Gonzales says. “It has to do with the organic portion of it, and that they use great ingredients, have a good recipe and it all works. There are so many other brands trying to get to that level of flavor who don’t.”

He adds that if he wants to drop a $1 rebate on Humboldt Distillery vodka or rum it’s guaranteed to be gone the next day, but hesitates to do so because it does well without discounts.

“It’s a shelf staple for us,” Gonzales says.

As the Humboldt Distillery brand gained tailwind, Stevens put on his traveling salesman hat. From there, he started hearing versions of the same refrain: “Humboldt, huh? You have any of that hometown special ingredient (wink wink)?”

With poker, Stevens knows, you can learn a lot from reading the individual across the table. So he went with it.

But with chemistry, he understands, it can be complicated to turn the conception of the Mary Jane Capital character into a palatable liquor. It took him a year to finalize the recipe.

“I’m a bit of a tinkerer,” he says. “It’s a challenge I enjoy to get something tasting good.”

I’d say he played his hand well. Holmboldt’s Finest is technically vodka but spiritually a botanical gin—on its own it unleashes pine essence that toys with citrus and a hint of redwood forest floor. I suddenly prefer it over some of the more elaborate juniper-born gins.

“The main part of our recipe development was trying to capture the flavor and aroma we wanted, which is tricky,” he says.

If you’re like me, you’re ready to nerd out as Stevens goes on to describe how the cannabis plant enjoys potent but delicate aromatic turbines in the same way a basil leaf or a hop seed cone does. That sounds irresistible in concept but problematic in practice.

“With [weed] people think more skunky and funky, but when we tried to capture that skunkiness it didn’t make for good cocktails,” he says. “What we did was find that fresh marijuana leaf quality, the smell that happens when you rub a fresh leaf.”

He says he didn’t have many expectations for his latest act, but Humboldt’s Finest has been popular among veteran barkeeps and home-kitchen craft drink connoisseurs as well.

“It’s a great substitute in your experiments,” Stevens says.

Like Stevens, Courtney wears plenty of her own hats as co-founder, lead marketing chief and human resources admin. She enjoys the chance to work as a family, but says her favorite part of the team project lies elsewhere.

“I like dealing with all kinds of interesting people in a fun industry,” she says.

If that means more people consider sourcing and clean water sensibility in an era of climate insanity, cheers to that.

Before I left the Fortuna mini-production plant, Stevens had one more thing to show me. Past the homespun bottling and labeling hustle, in the back of the distillery, sits a dusty 1957 Chevrolet Bel Air.

But the broken classic car happens to tell the distillery’s saga in three acts.

Act one: Stevens’ grandparents used to drive his dad and uncle to school in it.

Act two: Abe asked to rescue it from decay so he could rehab it and convert it to run off byproducts of their production process.

Act three: Courtney, Abe and their young child plan to take it on their ongoing traveling roadshow to introduce a rare organic liquor to new audiences around the region and beyond, complete with a display case that optimizes a trunk bigger than a plus-sized refrigerator.

A gasoline guzzler of the past becomes a clean-breathing part of a better future.

Whether we saw it coming or not.