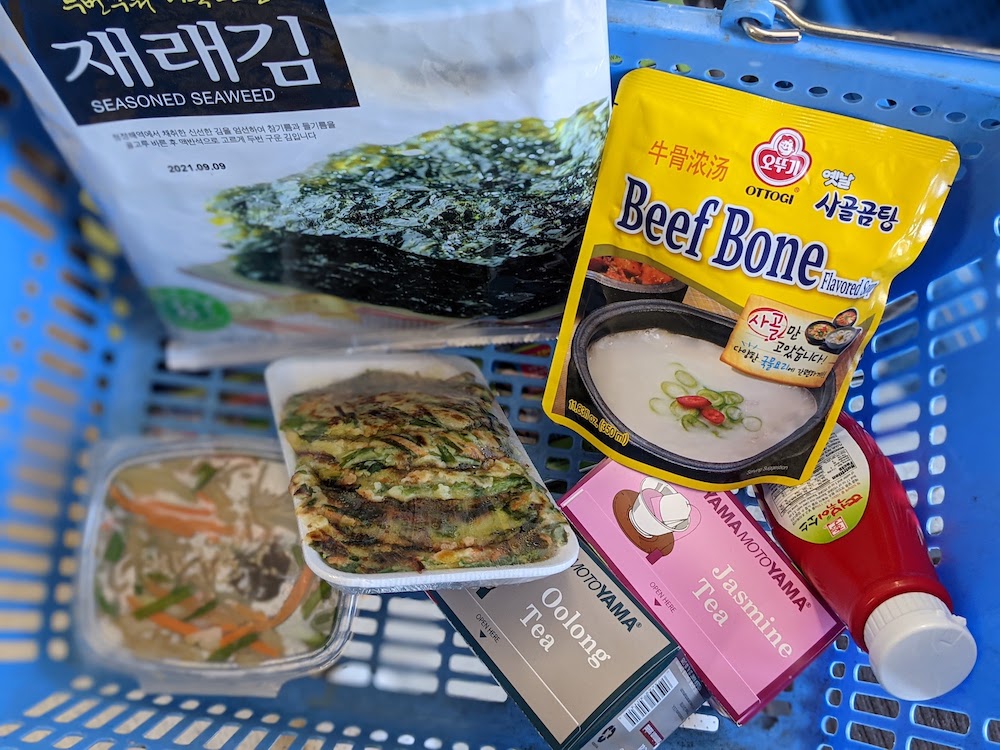 July 23, 2021 – Walking into little Han Kook Market for the first time in my life, my hopes for discovering treasure are immediately uplifted by what I see.

At the counter stands Chef Michael Jones, the same inspiring, outspoken, down-home, in-demand, off-putting renegade who will go to the ends of the earth for the right ingredients.

Jones makes pilgrimages here all the way from Carmel Valley every Friday he can.

The reasons are two-fold.

For one, Han Kook stocks a wonderland of dry and frozen imported goodies—and day-fresh noodle and vegetable dishes at the serve-yourself cold bar in the back of the store—Monday through Saturday.

But it’s on Friday when the family-owned operation sets out warm grab-and-go specials by the counter. The rotating goodies include things like zingy chicken wings, bibimbap, fresh fish cakes, and sushi-like kimbap rolls.

I leave with freshly pressed savory Korean-style scallion pancakes and some japchae noodles. Together they would help create a killer family meal that night.

I also take home a huge bag of rice cake medallions. And another big bag of vegetable dumplings.

And bundles of udon-jjajang noodles, beef bone soup bullion, two boxes of imported teas, a jasmine and an oolong, at a crazy low price point.

There was more plunder where that came from, like a bottle of hot pepper sauce for topokki (!), large sheets of seasoned seaweed for a fraction of what they would be at Whole Foods, and plump dried shiitake mushrooms, vacuum sealed dry, ready to be rehydrated and tempura fried.

Walking out, I feel like I’ve won some sort of shopping spree and a crash course in Korean flavor at the same time. In fact, I had to walk out sooner than I wanted to because, despite the striking bargains, I was trending toward overwhelming my budget and fridge space.

Jones’ second reason for coming: He loves the owners as much as the extruded cuttlefish “pasta” with chili that he puts on his restaurant’s poke; the soba noodles made with yams; the kimbap vegan sushi; the real Korean soy sauce (made with soy, not wheat); the Korean sesame oil; and, as he adds, “whatever [they’re] cooking.”

“They’re our friends,” he says. “They’re hilarious. The nicest, sweetest people in the world. I find myself going in there even though I don’t have to.”

A quick additional nugget: Both of my loyal readers will remember one of the first installments of Found Treasure, when I couldn’t resist taking the primary revelation to be had in Watsonville (Beer Mule Bottle Shop + Pour House) and tacking on bonus finds right nearby, including an amazing cafe in a tiny airport and a craft beer bar in a gas station.

So it goes at the modest and scruffy-looking strip mall Han Kook calls home.

On one side is Chopstix and its high-value Vietnamese food and beautiful polished stone bar.

On the other is action-packed La Morenita Mercado and its Latino market, butcher counter, piñatas and homemade tortillas.

Next to that is Orient Express, which (like Han Kook) doesn’t look like much but more than makes up for it with gracious service and delicious topokki rice tubes, bibimbap with extra fried egg and some very tasty bulgogi.

A local tamale trailer operation even parks in the lot almost daily around quitting time until she sells out gems like her jalapeño-cheese.

It all goes to show that if you’re out there looking to find treasure, you might just get more than you bargained for.