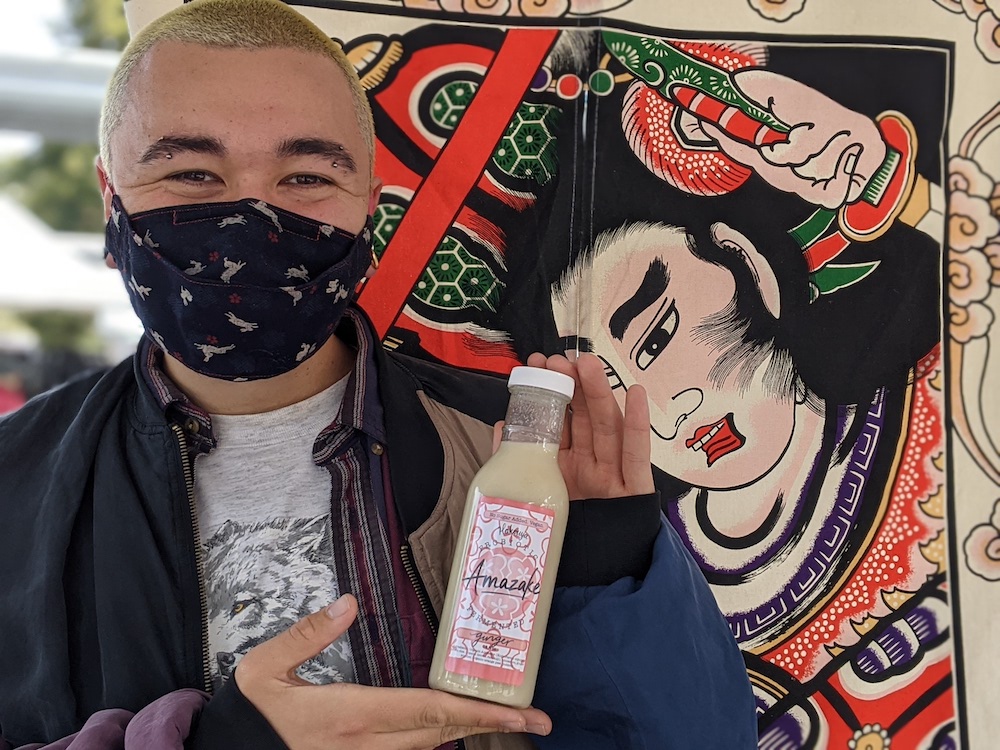 April 30, 2021 Assignments for our upcoming summer issue had me eating more in the last two weeks than I had in the previous two years, while discovering new forms of fullness. I was 24 hours removed from COVID vaccine shot number two, right around when symptoms tend to surface, and wary of introducing much more than water and straightforward foods.

In other words, probably not the best time to go to a place like Santa Cruz Westside Farmers Market, given all its temptations.

But there I was.

When I spotted a sign for “probiotic rice mylkshakes” of which I had never heard word—with the tagline “Tastes like melted ice cream”—I was curious, but merely wanted a business card.

No new drinks for me. I could study up and learn more before circling back to try it another time.

Then the point person at the Hakouya Amazake table was quick with his pitch. Before I could explain I wasn’t interested, Josh Agbayani was summoning words predestined for my intestines.

“The ‘milkshake’ is great if you’re feeling under the weather or have been eating a lot of meat, since it is amazing for inflammation,” Agbayani said. “It makes you glow from the inside.”

From a list of miso-vanilla, ginger, matcha, cinnamon coco, and plain, I was leaning toward the first two.

Agbayani nudged me toward ginger with testimony that the miso is more sweet, naturally, “like cake ice cream.” After all, my internalities told me, the more ginger, the mo’ better.

It delivered on my hope and Agbayani’s hype: silky horchata-like texture and taste, balanced between slightly sweet and light root spice, with stomach soothing properties that felt real. I considered buying a case. (A bottle is $8.)

The good news is it will be easier for south Monterey Bay residents like me to re-up, without a pilgrimage to Santa Cruz, starting Friday, June 4, as Hayouka extends to the Monterey Farmers Market at Del Monte Center (8am-noon).

While new to me, amazake dates back to the earliest era of recorded history in Japan, circa 300 AD. The family of Japanese foods it belongs to, all made using the koji mold Aspergillus oryzae, includes sake, miso and soy sauce. Traditionally it’s been deployed cold or warm as a dessert, snack, sweetener, salad dressing or baby food.

Its beneficial elements know no end, per the cheat sheet Josh handed me with my shake. It cites long-lasting energy and blood sugar boosts; red blood cell generation; enhanced cognitive function; and high amounts of fiber, protein and B vitamins. In the Far East it’s considered a hangover panacea.

“In Japan,” the small piece of paper elaborates, “Amazake is compared to an IV drip because of its amazing nutritional value.”

I can testify my appetite came roaring back and I felt fine all weekend despite the vaccine shot. At least some credit belongs to that humble Hakouya shake.

Amazake is one of a range of products Hakouya handcrafts at El Pajaro CDC Commercial Kitchen in Watsonville. They also do miso dressing available at local shops like Aptos Natural Foods, Blossom’s Farm, New Leaf and Staff of Life. Other products include slow-fermented miso pastes, miso soups, koji soy sauce and koji salt.

The culinary possibilities are tempting, and amplified when the probiotic bonuses factor in. Conveniently enough Hakouya owner Eriko Yokoyama, who grew up on a probiotic-rich Japanese diet, led cooking classes focused on precisely that, pre-pandemic. (She is currently scheming a new Zoom series to continue education around koji enzymes.)

Yokoyama went to cooking school in France, then ran Pacific Rim Buffet in Aptos with her late husband for 13 years. A bout with breast cancer redirected her priorities.

“I used to love French food and heavy food and cream cheese and all that,” she says. “Then I realized I needed to go back to the food I grew up with. Nobody knows koji enzymes are in so many things and how good they are.

“It’s all over in Japan,” she continues, “but even Japanese people don’t always know it. In Japan the cancer rate is much lower than the USA. Koji is something that can make the world better.”

To that I would say hell yes. But that’s just my gut reaction.