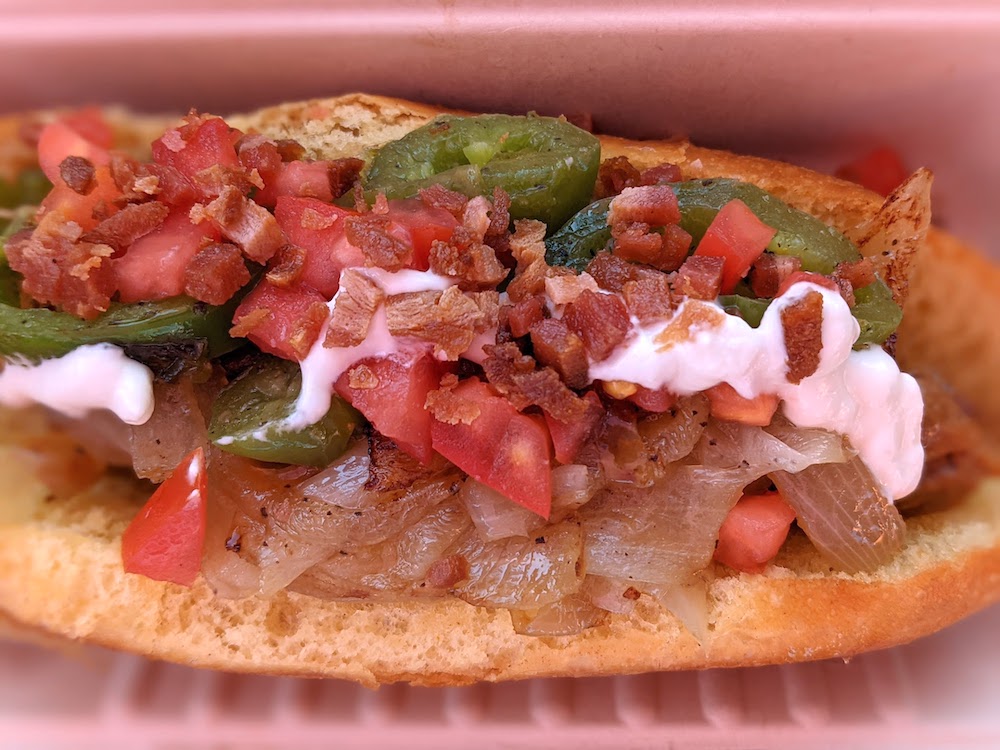 October 8, 2021 – Down in the coastal city that is La Paz, Baja California Sur, Mexico, the adjacent Sea of Cortez teems with so many sea lions, fin whales and whale sharks that Jacques Cousteau called it “the aquarium of the world.”

Its oceanfront district overflows with dramatic public art installations and strollable walkways that stretch for more than a mile.

Each element proves worthy of international attention. But the biggest point of local pride is none of the above. Instead, it’s hot dogs. What locals call “jates” are a specific sort of tube meat wrapped in bacon, showered in diced tomato and slathered in crema.

Why am I telling you this?

1) I love hot dogs. I seek them out from Chile (where the traditional toppings are simply ketchup, mayonnaise and guacamole) to Chicago (where during a short layover this summer the only real goal was a Chicago dog from Portillo’s on a poppyseed bun, with mustard, electric green relish, onions, tomatoes, pickles, sport peppers, celery salt and zero ketchup).

2) I’ve wished we had our own signature Monterey Bay hot dog—or just a reliable place to get them—for years.

I lived in La Paz—and lived off of fish tacos and jates—in late 2019. It was right around then that Maria Gonzales was experiencing a similar longing for locally sown hot dogs. The Watsonville native had returned home after a decade in San Francisco that included culinary school and she wanted to do something in food.

“I thought, since nobody’s really doing hot dogs, it would be something really unique,” she says. “Besides, everything [hotdog-related] in stores was from outside the state. Why not have something from the Central Coast?”

But what makes Gonzales’ dogs unique isn’t so much where she gets her ingredients but what ingredients she gets.

Yes, she dresses her dawgs with fresh produce, but she also crafts the hot dogs themselves from vegetables and grains: Each Cali Dawg is completely vegan, created from a combination of wheat, garbanzo beans, coconut oil and mushrooms.

If you’ve ever spiraled down into a list of what goes into mainstream hot dogs—including sodium nitrate, corn syrup, phosphates and mechanically separated chicken—that’s welcome news.

“It has to be good ingredients,” she says. “A lot of mock meats have ingredients that make your stomach feel a little different. I wanted to set the bar high with my sausages.”

After growing up in a family that loved quality time in the kitchen and a lot of meaty proteins, Gonzales gradually transitioned to a vegan diet.

“The more I got educated the more I realized how my body would feel if I avoided meat,” she says. “Once I learned more about how [livestock] is raised, and how diet affects disease—and as I had family pass away from diseases that could be prevented by diet—I learned more and more to the point I became vegan.”

A meat-loving family did come in handy when it came time to test her recipes.

“Since I was the only vegan in my family,” she says, “I had a good crowd to give me feedback.”

The response was enthusiastic, as it has been with the wider public.

“I’ve gotten a lot of meat eaters who love this stuff,” Gonzales says. “They like how it makes them feel, and they like the flavors. They don’t miss the meat. It makes me happy to hear because creating delicious food without meat is why I got started.”

She dishes her dogs at farmers markets and frequent pop-ups easily tracked via Cali Dawg’s Instagram page. At the event I encountered Cali Dawg, the list of options was limited but life-affirming. They included a chili dog with crispy onions—inspired by a favorite from her childhood, Taylor Brothers Hot Dogs of Watsonville—and a “Califas” with coleslaw, pickled onions, sprouts and avocado mayo that PETA named one of its 2021 Top Vegan Dogs in the country.

I went with the “Mexi” and its grilled onions and jalapeños, “bacon,” tomato and mayo. It delivers freshness and richness, earthiness and spiciness, intrigue and satisfaction. It was excellent.

“There aren’t a lot of vegan options in our area,” Gonzales says. “When they hear ‘vegan,’ people think tofu and weird textures that don’t make them feel comfortable. My new customers expect a meat hot dog, but when they give it a chance, they come back and they’re like, ‘Wow.’”

“My right hand lady is my mom,” Gonzales says. “She’s basically the backbone to my business. Since we both love to cook and create recipes, we have a lot of fun cooking family recipes at home, then we veganize them and make [those dishes] for the public.”

Cali Dawgs operates out of El Pajaro Community Development Corporation, where Cesario Ruiz runs the kitchen incubator program that helps get small businesses up and running.

“Maria’s been a doer since day one,” Ruiz says. “She has a great attitude when it comes to being a leader and someone who cares about the planet as a whole. The level of integrity she brings carries through every thing she does. It’s a blessing to work with her, on many different levels.”

Ruiz observes how Gonzales is a prime example of what the incubator can do in transforming upstart ideas into treasured community institutions.

“She listened to the advice we provided and incorporated that into customizing her business idea,” he says. “We don’t tell people what to do. We offer information and assistance and, at the end of the day, they’ll make their own decisions. Maria listens and she executes.”

If Edible readers out there are picking up a pattern in this column’s coverage, good on you. I’ve spotlighted other operations that found traction with El Pajaro CDC’s support—including Hakouyas Probiotic Mylkshakes—and I love following the rising alliance of vegan-focused, female-led operations like Cali Dawg’s pal Areperia 831.

In fact, Areperia 831 and Cali Dawg frequently appear together with vegan siblings Hole Foods Vegan Donuts as part of something Gonzales calls “the triple threat.”

It’s the type of stuff that eases my longings for the jates of La Paz, and that much prouder to call Monterey Bay home.