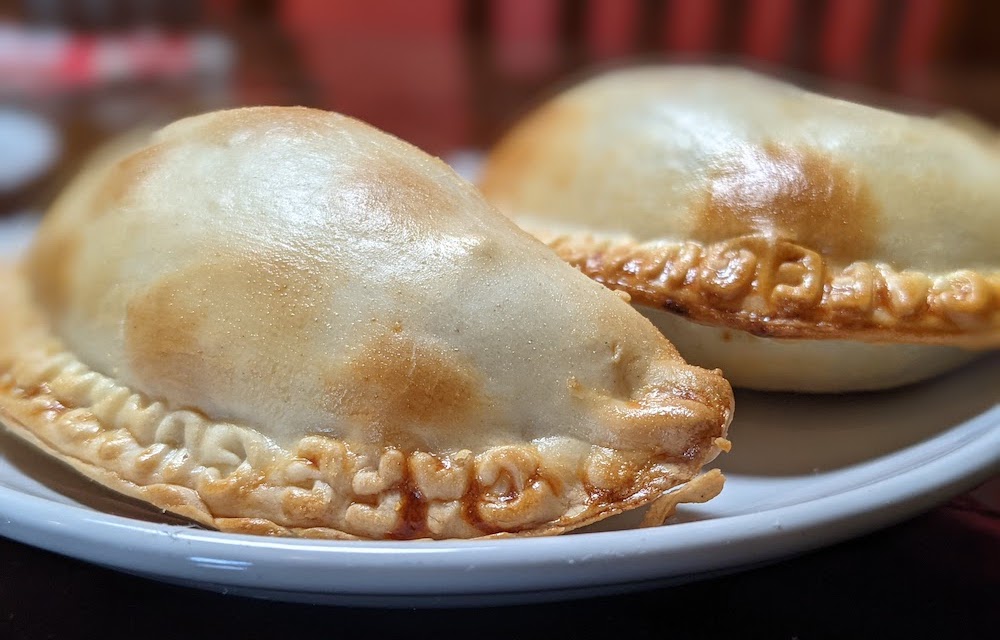 July 30, 2021 – I could make an argument that empanadas are the perfect food. Something about the texture, portability, versatility and interplay of crust and melty insides deliver an experience tastier than the sum of their parts.

Truth be told, I could make a compelling case for tacos and pizza too.

But the availability of empanadas—or lack thereof, at least in this corner of the world—makes them much more of a treat. Think about it. The Monterey Bay area enjoys a plethora of epicurean options, including plenty of triumphant tacos and crave-able pizza pies. With empanadas, we’ve got almost nada.

That changed in the early pandemic throes of 2020, when chef Liliana Rodas de Araujo and a team made up almost entirely of her nuclear family opened Café Guaraní. It occupies the former Tillie Gort’s on Central Avenue in Pacific Grove, with all sorts of thoughtful and thoroughly South American decor, which keeps with two major themes here: attention to detail and attention to cultural heritage.

I fell hard for empanadas in one of the world capitals for the little pies, Buenos Aires, Argentina. I bought them from street vendors, subway salespeople, peeps outside Boca Junior fútbol games, brick-and-mortar bakeries and then I cooked my own with masas I got at the mercado. I ate them baked and ate them deep-fried, morning, noon and night. I chowed all the common combinations, including the regional classic made with seasoned ground beef, green olive and hard-boiled egg, and sought out more inventive versions like pineapple and cheese. I must’ve taken down two dozen a week, every week, for a year.

When I left the country and couldn’t access them regularly, I cried for Argentina and myself.

Flash forward a few years and, while I am a little misty that the vegetarian-leaning Tillie Gort’s institution is no longer, I am totally amped by what took its place.

Café Guaraní is named for the Guaraní people indigenous to Paraguay and the surrounding areas, and its food very much belongs to that part of the planet. Rodas de Araujo started working at her family’s restaurant in Coronel Oviedo, Paraguay, at the tender age of 6. She would go on to master baking under her Argentinian mother-in-law, Ofelia Schmoll de Araujo, a gifted chef and celebrated instructor for the Institution of Culinary Arts of Paraguay, before ultimately moving her family to P.G. after her own mom found work in medicine on the Monterey Peninsula.

Her empanadas reflect that bicultural background. She offers both Paraguayan staples like empanadas with shredded beef and mandioca (or yuca) dough and Argentinian-leaning go-tos like ham and cheese.

On my first visit to try them out, they won my affection immediately. The highlight had to be the special of the day, a mouthwatering 12-hour-smoked pulled pork number elevated by handmade, herb-driven and garlicky chimichurri—yet another glorious South American tradition—made by Rodas de Araujo’s son Axel. (The 12-hour pulled pork has since been added to the daily menu.) I also liked Guaraní’s atypical take on a traditional ham-and-cheese with its béchamel sauce and cubed pork.

On a subsequent visit I slathered chimichurri on one of the yuca empanadas. Thanks to its fluffy casing and intuitively seasoned beef, I inhaled it in a minute, max.

The rest of the daily empanada menu unfurls a range of around 10 other choices, both baked and fried, with vegan and gluten-free options, and an oak-and-pecan-wood-smoked prime beef brisket. Rodas de Araujo also creates a breakfast empanada with egg, mozzarella, ham and a blend of spices.

The empanadas would be enough to bring me in, but the thing that makes Guaraní an especially welcome discovery is that the savory pies are but the beginning. The treasures multiply from there.

Her team also crafts berry pies and cake pops for holiday events, old-school Paraguayan breads (like the mbeyú, a pan-fried to order cheesy flatbread, and the anise-accented chipa), and an avalanche of artful cookies, pastries and other desserts, including luxurious 8-inch cakes.

One particular indulgence to earmark is the Argentinian-style alfajor, a doughy cookie sandwich with dulce de leche caramel in the middle. I took some to two of my favorite foodies—hola Kim Stemler of Monterey County Vintners and Growers and Steb Montez of KRML and Nacho Bizness—and watched eyeballs roll back in heads.

They even stock yerba mate, another item South Americans treat with intense pride. On that end of the continent, no real social gathering is complete without a gourd filled with loose leaf tea and steeped in boiling water. Guaraní also furnishes coffee and espresso, but I had to go with a cup of the cocido, a mate concoction brewed from roasted tea leaves and sugar—energizing and riquisima at the same time.

“Once people try it, they keep coming back,” Axel says.

When Rodas de Araujo and her family first came to California, she worked at several bakeries, but struggled with the long hours, limited wages, and insufficient health care. So she set aside the apron, went to Monterey Peninsula College and found work as a phlebotomist at Community Hospital for the Monterey Peninsula.

At the same time, she kept her abiding passion alive after hours, cultivating an online business that became a cult sensation, by the name Liliana’s Cakes. After more than a dozen years at CHOMP, she was able to retire and jump back into baking full-time.

And the family is 100% along for the ride. In addition to Axel, her son Santiago handles the meat-smoking duties, her daughter Gabriela and daughter-in-law Gabriela run the front as baristas, and her other son Sebastian pitches in part-time. Her husband Victor led a remodeling effort that includes a sparkling new bathroom, polished stone floors and a sanctuary of a patio out back they call their Secret Garden.

I love how the whole fam is in on the operation. But it might be chef’s after-hours hustle to keep cooking incredible cakes—check out the scrapbooks with photos in the dining room to see them—that I admire most.

“All the time I was baking,” Rodas de Araujo says. “I never gave up.”

She’s on a mission to share foods important to her family’s and her native land’s identity. But on a simpler level, she just loves to cook.

“The only thing that could keep me away from my passion was supporting my family,” she says. “Now we’re all here together and working on the same passion.”

Which makes the empanadas taste that much better.