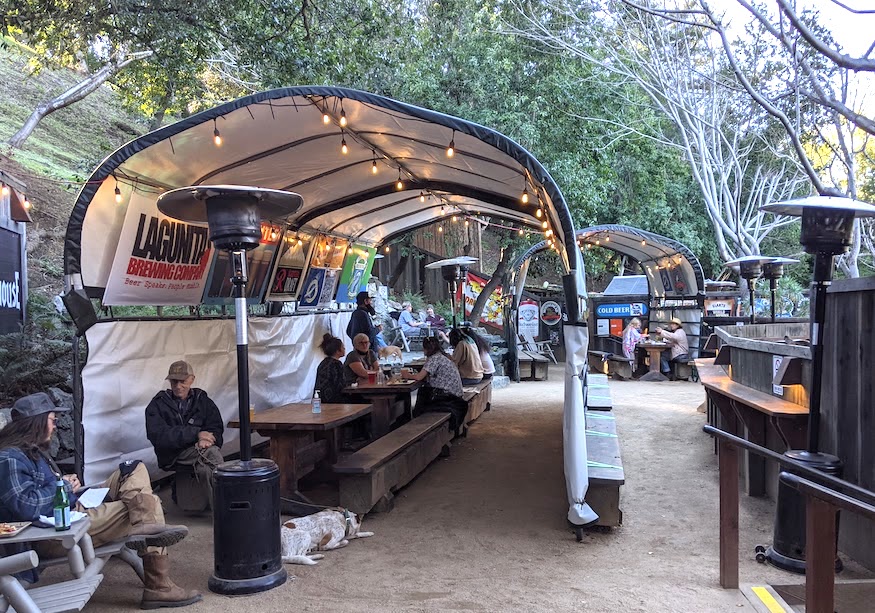 June 25, 2021 – For its relative remoteness and modest population, Big Sur enjoys a wealth of one-of-a-kind foodie finds. There are enough gems like, say, Treebones’ Sushi Bar, Ripplewood’s scalloped potatoes, Nepenthe’s magic, Big Sur Bakery’s bacon scones, and Deetjen’s Benedicts that 1) It stakes a claim to the crown as Found Treasure Epicenter of the California Coast; 2) It inspired me to pitch the similarly one-of-a-kind Anthony Bourdain on making it a destination for an episode of “No Reservations.” (BTW, as the fates allow, today is Bourdain’s birthday.)

But hitting many of those places on the regular would get cost-prohibitive. Which furnishes one reason the locals’ most popular spot appears further north, next to the post office and the restaurant’s sister general store (with its robust deli offerings and strong craft beer selection).

That’s where Big Sur Taphouse draws as many locals as any South Coast spot, for a number of reasons beyond affordability.

One reason feeds into the inspiration to make multiple visits in a given week: Budget-friendly daily specials run through things like Mardi Gras Monday, Taco Tuesday and Burger Wednesday. Ahead of the game for Fishy Fryday, Weekend Brunch and Weekend Roadtrip, I was there for Pizza Night, aka Thursday.

I’ve heard good things about Taco Tuesday’s value, but was happy about my timing. Pizza Night just feels and sounds like a holiday. And that was before I saw Kevin Bacon on the menu.

I would’ve ordered it purely for the two little pictures of him on either side of the menu item, in a chef’s hat. When I saw the ingredients, it made the decision a done deal.

I could nitpick the soft crust (a touch more char would be good), but that feels a little insincere because I ate so much of it so fast, savoring the thick-and-crispy bacon, scallions and ranch drizzle, with a kick from packets of Texas Pete hot sauce.

The daily deals, a solid play anywhere locals seek interesting and affordable options—something that intensified for communities tired of cooking at home amid COVID—are but the beginning of the reasons to dig into this treasure.

• The outdoor seating. This represents another COVID-friendly quality that improved amid the pandemic crisis. The back lot was a funky bonus already before it got a nice covered outdoor TV area and a hoop house-style community picnic table space. It might be the best place to watch sports in Big Sur.

• Quick service. The service model is a godsend, particularly when tourist crowds choke up other spots. Guests order at the bar, grab a number and await the timely food arrival.

• Dog-friendly environs. Not all parks—like the wonderland of them that exist in Big Sur—welcome dogs. The back patio at BST does.

My longtime colleague and friend Stuart Thornton turned me onto the robust daily special sequence at Taphouse. (Send any of your Found Treasure thoughts via ediblefoundtreasure@gmail.com.) He lived in Big Sur for years while working for State Parks, and as a Moon Travel author, dude knows his spots.

“I love the great deals—$10 for a good meal like Taco Tuesday is impossible to find in Big Sur—and it’s easy to navigate, which is underrated given the popularity of Big Sur and [the] resulting lines,” he says. “And the back area has been gussied up and is very accommodating.”

When I pitched Bourdain on Big Sur, the food culture was front and center, but so was its artistic-wordsmith soul, and the opportunity for Cousin Tony to riff off the inspiration found by the likes of countless visiting music acts and writers like Jack Kerouac, Anaïs Nin, Robinson Jeffers and Henry Miller.

Miller was many things—a visionary, a ping pong enthusiast, a provocateur, a womanizer. He was also a hardcore local. When he called Highway 1 home, Nepenthe was a funky bohemian hangout without the crowds or the price tag it comes with now. (For the record, Nepenthe does enjoy the coolest staff I’ve seen assembled at one spot, so some things haven’t changed.)

I have a feeling if he was around now, Miller would find himself frequenting The Taphouse with fellow locals.

Which invites a mini benediction to close the piece, and one that echoes my thoughts when I find a seat at BST, eating good, watching sports and drinking quality craft brew: As Miller once said, “It was here in Big Sur that I first learned to say, ‘Amen.’”