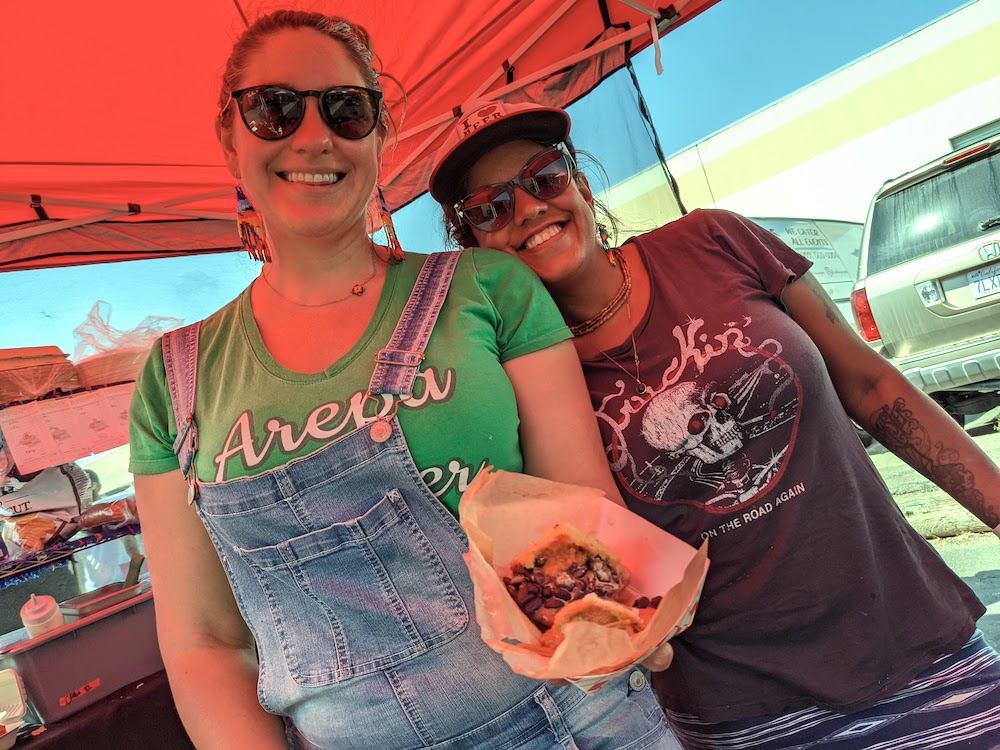 September 10, 2021 – Vrinda Quintero and her Areperia 831 are a revelation for a range of reasons. For one, few people in this part of the world know what arepas are, let alone prep them at home. Fewer cook them up for the public. Fewer still do it vegan or with an all-female squad.

The most eye-opening thing about the operation, though—and the most inspiring—is just how much good Quintero and company do through food. Yes, this is a story about a delicious indigenous dish, but it’s ultimately about community organizing, education, empowerment and poetry too.

More on that in a second. First to the arepas.

I originally encountered arepas on the northern end of South America from whence they originated. They’re cornmeal cakes that can be topped or stuffed, then baked, grilled or fried, and vary in thickness and style depending on whether it’s a Venezuelan or a Colombian manning the traditional budare pan.

I first encountered Quintero after hungrily tracking Areperia 831’s Instagram feed for weeks. On a late summer Saturday she helped anchor a mini-but-mighty pop-up tasting festival of sorts on Hangar Way in Watsonville. Along with Cali Dawg and Hole Foods Vegan Donuts, they set up in the parking lot in front of Slough Brewing Collective and Santa Cruz Cider Company. While each contributor poured or cooked, Prunedale nonprofit Little Hill Sanctuary educated interested parties on its work rescuing and protecting animals from cruelty.

My crew and I tried a signature arepa and a day-of special. Areperia’s popular black bean-plantain-Asian slaw “Cruz Cruz” (named for Santa Cruz and its sister city Puerto La Cruz, Venezuela) and the queso birria (with jackfruit “pork”) worked in different ways and both were deliciously earthy and oozing flavor. Their pleasantly messy melange of sauces and textures tuck into an arepa shell that’s ever-so-slightly crispy and the key to the whole thing. The coconut oil-based “cheese” is a big help too.

Quintero grew up in Venezuela and fell in love with her grandma’s fried arepas early on, before leaving in her mid-20s when she saw the country unraveling. I tracked her down to learn more and that quickly led us into the issues she’s tackling with her work, because they’re so interwoven into how and why she does what she does.

Below appear some highlights from that conversation, edited for clarity and length, which happened as she was gathering ingredients at Second Harvest Food Bank for her culinary students at Sequoia Alternative School. She also teaches cooking at adult school and, in non-COVID times, with Downtown Streets Team, a training program for the homeless that cultivates kitchen skills to help them secure work and stability. (While classes have been paused, she still brings lunch to weekly meetings.)

Chef Andrea Mollenauer owns Food Lounge in downtown Santa Cruz, where Quintero has cooked in the past, and has followed her food and education efforts for years. Mollenauer also connected Quintero with the Career Technical Education Partnerships administrators when there was an instructor opening in the corrections system.

“I recognized that Vrinda has a passion for the equitable treatment of people,” Mollenauer says. “She uses food, feeding people and teaching people how to cook as a way of empowering them to better themselves.

“I taught alongside her in the jails and saw her unique ability to truly see and hear people and help them grow through health, nutrition and meaningful work. The way Vrinda uses food to connect with people and empower them is inspiring.”

When Quintero’s not teaching she’s likely cooking on behalf of any number of local non-profits, directing much of her energy to organizations fighting animal suffering and people experiencing homelessness. Saturday, Sept. 18, the Areperia 831 team will serve free three-sister stew at The Community Forum at Santa Cruz Mission Plaza Park. Come Oct. 1, they’re frying up arepas for the Midtown Fridays Block Parties at 111 Soquel Ave. in Santa Cruz.

I grew up almost vegan. (It was hard for me to give up things like butter.) Growing up, it was hard to find vegetarian items that didn’t seem like an afterthought, and that made me sad.

We do vegan because, if I want to make something of beauty, I want to create something that’s good for the environment. We’re also gluten-free, and allergen-free.

More than a moral kind of thing, it’s a thing of inclusion and a thing of belonging. I can make something that everybody can enjoy.

That’s also why I use pop-ups and free food events. They level the field, so it’s not haves and have nots. Everybody sits at the same table and has the same feast.

If you break the proverbial bread with people, we’re all equal.

What can you tell me about what you put in your arepas?

I want it to be something good for people’s bellies. I use a lot of Ayurvedic and things with life-giving properties: turmeric and garlic, natural anti-inflammatories, ginger, green onions, fresh herbs, cilantro and celery, good fiber—lots and lots of fiber.

And everything is seasonal. The Earth is giving you all vitamins and things you need to stay healthy and connected to each season.

A lot of big thought goes into each little arepa! Why do you maintain an all-female staff?

I’ve had a complicated life, and the people who come to my aid are always women. When I started, everyone who said, “Let’s do this” were women. In a practical sense, while we’re selling food, working with people experiencing homelessness, working with animal shelters, moving a lot through the community, the energy women bring is right. Whether we’re catering a big fancy wedding or cooking food with people experiencing homelessness, [my team] has the same demeanor, and moves seamlessly and in a nurturing way.

Why do you weave service into your food?

For three or four years I was Homeless Services Center manager [in Santa Cruz] then a consultant for nonprofits. I found a lot of things we did were constricted by grants. One year you get it, one year you don’t. I didn’t like that. We build trust with people then break it, and it might be bureaucracy’s fault.

I thought I’d start a new social enterprise, a for-profit that has accountability on what its social and environmental impacts are. I try very hard to work with the coastal watershed to bring attention to water waste and ocean health, with the Downtown Street Team, people experiencing homelessness, animal shelters. Social, community and environmental impacts are as important as my profits.

When I decided to do it, I thought, “What do I like to eat the most? What gives me the most joy?” Fried arepas. They were something we always ate at the beach in Venezuela. It was not an inland thing, not a daily treat. My grandma on my Afro-Caribbean side would make fried arepas. No one else had them at home, they’d only get them at the shanty shack. It’s what I miss the most about Venezuela: arepas and my grandmas.

What would your grandma say about your operation today?

She would love it. When I graduated college, my parents were in the U.S. and it was my grandmas who showed up. They were supportive no matter what I did. If ever in my life I felt I needed love, they were the ones to give it. They had the force of loving anything I tried out.

What else do you hope to accomplish with your food?

I’ve found that in most places in Latin America, the best foods are home foods, partly because we didn’t have time or space to sell our food when the situation outside the home was terrible. On top of that, a lot of Latin American cuisine got a big hit from European conception that indigenous foods were poor people’s food.

When I teach culinary now, I have a huge issue cooking and teaching the five mother sauces—there’s this idea that it’s better than mole, which has such complex depth of flavor.

Colonization of food and kitchens is something I want to fight with my food. I want to bring back the dignity and beauty of our foods.

You’re a big believer in the power of poetry. Your email signature has a beautiful line from one of my favorite poets, Mary Oliver. (“Love yourself. Then forget it./ Then, love the world.”) What would be one of your favorite poems that pertains to food, nurturing and giving back?

I love poetry. It’s my favorite thing. I think it’s a form of meditation. A person at school said something very nice the other day: “It seems like you have a pocket full of poems.”

A poem I really love about that is called “Kindness,” but really I’ve been thinking about a poem by Paolo Neruda “An Ode to Thanks” recently.

Thanks to the word

The world is a threatening place

from one pair of lips to another,

soft as a bright

and sweet as a petal of sugar,

filling the mouth with its sound

I feel like food does that same thing. If you offer someone a cookie, it immediately changes everything. It changes enemies into friends. The generosity is contagious. It gets passed on.