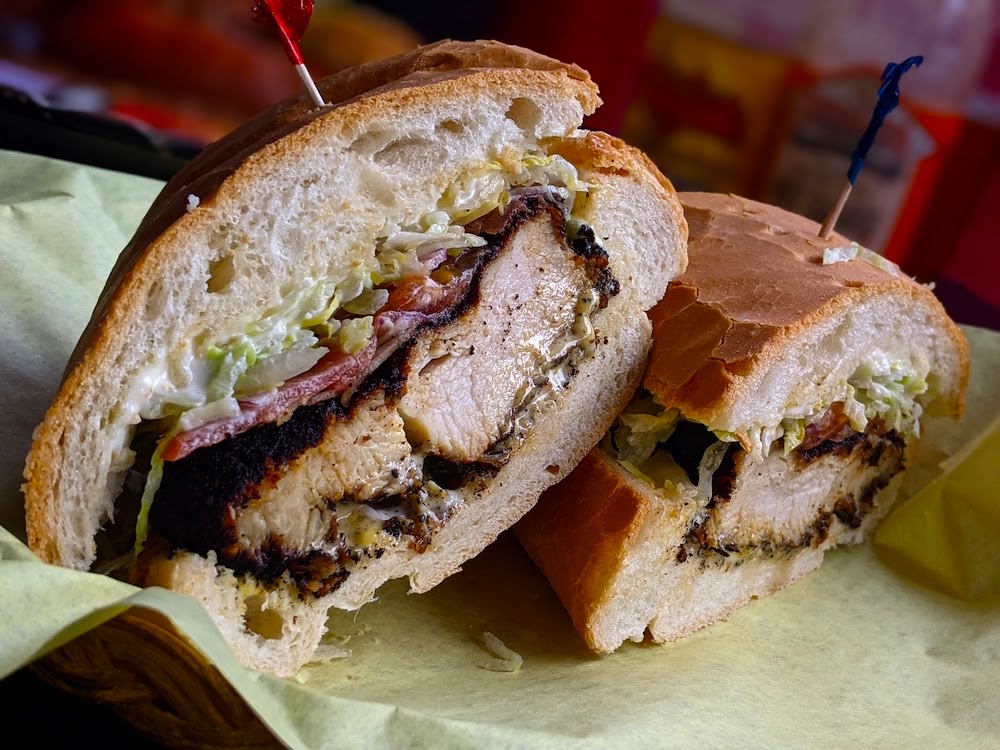 April 23, 2021 – The dusty business cards that wallpaper the east wall are artifacts from another era.

Same could be said for the business model: cash only, lunch only, weekdays only, word of mouth only, no website, no apologies.

Same could be said for the service, and an approach that seems to say, “We’re going to do what we want and serve what we want, maybe with a dash of attitude, if we feel like it.”

My favorite item started as a daily special, but grew so popular ownership relented and made it available five days a week: the blackened chicken sandwich.

It’s impossibly thick and moist in the middle while being thoroughly black, slightly crispy and slightly chewy on the outside. The minimal and thin-sliced tomato and onion, with a supporting splash of shredded lettuce and house aioli—like the soft roll with just enough chew to hold it all together—play their parts in proportion to the main act.

I can’t say I’ve eaten all that many blackened chicken sandwiches, but this is the best I’ve tried. I asked owner-operator Tom Good what makes it so tasty. He shrugged and said it was lots of Creole seasoning and three minutes each side.

The food happens against a backdrop that includes self-serve napkin dispensers and reliably a few interesting hot sauces I’ve never heard of, and I’m lightly obsessed with hot sauce. (Email ediblefoundtreasure@gmail.com and I’ll share the recipe for my homemade Puerto Rico-inspired version. You can also email me your own Found Treasure tips there too.) This time Good was stocking a fire Cravin’ Cajun Hot Sauce by Louisiana Fish Fry Products and an intense Bad Dawg Hot Sauce from Floyd’s Cajun Seafood and Texas Steakhouse.

On top of the business cards, there are river-rock-paved alcoves, scuffed hard-plastic pint glasses, the tiled sign out front, eclectic cookbooks and Monterey Bay Blues Fest photos from 1990s pinned to the kitchen wall, back when the festival existed and Ferdi’s served the entertainers backstage.

Not your place if you’re thrown off by windows overdue for a wash or light fixtures that could use a dusting. But that leaves more for me. In fact, part of the inspiration for this column was the chance to celebrate precisely these types of places, those that aren’t the shiny new object, where character is a major—albeit implicit—part of the menu, and where they have priorities in their own order.

But we’ve got a lot of treasures around here, so this week I was still debating which would be #6 when I asked a neighbor pal named Carmen if she wanted to check out Ferdi’s once we were done dropping food boxes for All In Monterey, a community treasure of another variety.

Carmen has lived and worked in the Monterey Bay Area for much of her life, and at some of its most popular restaurants. She knows the peeps and the spots. She’s also really into food. So when she told me she hadn’t heard of Ferdi’s I knew it was next on the list.

Did I mention she lives less than a mile away.

When the blackened chicken hit, I’m pretty sure her eyes rolled back in her head. We also tried a banana shake that was thick in its own right, and simply spot on, as were the red beans and rice, with enough depth and spice that you know all the flavors you seek are there even if it’s not clear how Good did it.

Carmen riffed on what she liked happily while we ate, but she saved her highest compliment for when we were done, when she said, “I gotta bring my mama.”

The menu insists hours are subject to change. Thankfully they might be the only thing here that does.