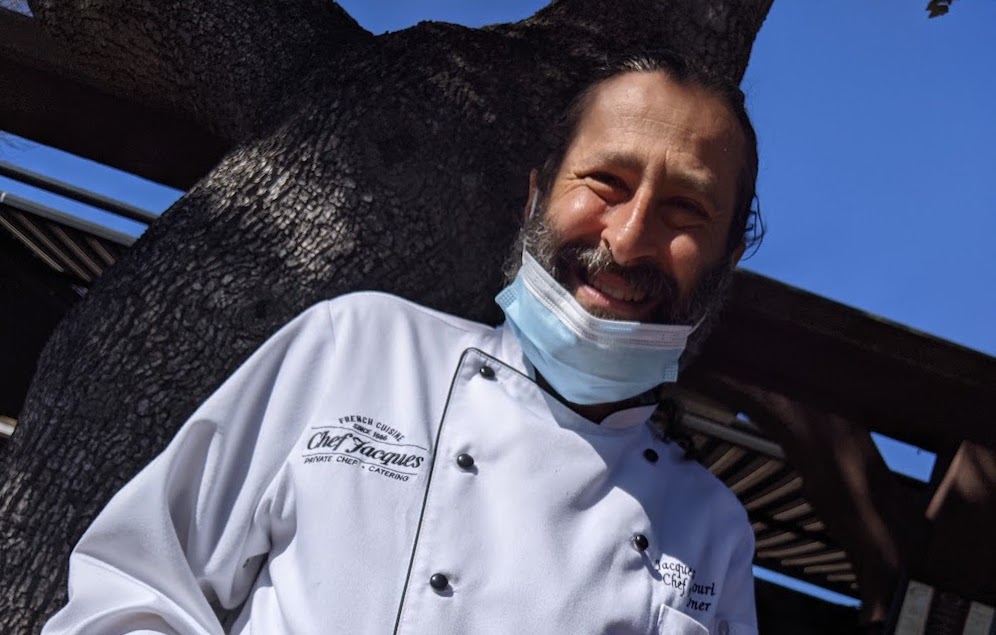 April 16, 2021 – Chef Jacques Zagouri has been revisiting his recipe for life and death.

Navigating war in Lebanon wasn’t enough to change it. Having a daughter and son who served and is serving (respectively) in the Israeli military wasn’t enough either.

It wasn’t the heart attack that put him in the hospital in early summer 2018. It wasn’t the second, third, fourth, fifth or sixth in that same year. And it wasn’t the half dozen that came in 2019. Neither was it his heaven-sent partner, Natalie Zayas, who helps supplant certain bad habits with healthy new ones.

It was all of it—the whole half century of everything. Polarizing violence in the Middle East. Surviving, emigrating, thriving, partying like the devil on Mick Jagger’s shoulder, working nearly 20 hours a day—and all the foie gras, butter, red meat and cream you can fit in a modest French-Israeli-American frame.

His new deal with death means he updates his relationship with restaurants. Or, as Zagouri puts it, “No more restaurants for me.”

As hard as that might be for a guy so visibly and fundamentally made for this, No more restaurants is an intense smelling salt for his followers, who he gathered in droves at stops including Andrée’s Bouchée, Portobello and Fandango.

But he’s just so good at fine southern French—with an intuitive twist of Mediterranean and North African—it might be worth a little lifespan for some of his foie gras profiteroles, truffle-stuffed quail or saffron-sauced branzino.

The other day I told a restaurateur I’d been looking into what Zagouri is up to these days. Maybe the face mask muffled me.

“I was sorry to hear he died,” the industry pro replied.

An understandable sentiment. But chef is alive and well and as himself as he ever has been, which was great news to share.

There’s additional treasure to be found in this tale: Not only is chef’s ticker still ticking, but he’s blazing a largely wood-fired way to keep feeding his fan base.

The COVID creation emerging on the heels of his heart-attack hellscape is called “ChefJac” and could be described as a private chef-consulting-catering-food delivery-cooking class mashup long on versatility but short on stress-soaked shifts.

Zagouri describes it this way: “I keep cooking and doing what I love to do. I’m also in contact with my customers, which personally is very important. I still do what I like to do, without the demands of a restaurant, which for me is a killer. I bring the restaurant to your house.”

The consulting collaboration that caught my appetite is happening with Village Corner California Bistro, a Carmel institution since 1949 that’s experiencing its own rebirth.

A big part of that: Adding dinner. He tracked down Zagouri to help fine-tune favorites, introduce new items, and test drive much of it over the last few and coming weeks. The guinea-pig grounds are Thursday and Friday pop-ups that run from 3pm to close for the next month, through mid-May, boosted by live music, to be followed by expanded hours.

He’s baffled by that often.

“I’ll be standing at Flaherty’s when we’re full and I’ll say ‘Try our place across the street,’ and 99 percent of time, they’ll say, ‘Where exactly?’” Spilfogel says. “They don’t see it. ‘What do you mean you don’t see it? I’m pointing at it.’

He recruited longtime collaborator and restaurant and residential design mind Rudy Reate to reinvent one of the better patios in town (and the interior) as part of an ongoing renovation set to wrap when the pop-up concludes and wider hours arrive.

“We kept what was working, looked at what could be improved and [tried] to have fun with it,” Zagouri says in his cross-continental accent. “The [slow-roasted-brisket] chili was already really good.”

On my visits to the pop-up, he was clearly having fun in his element, flitting between the pizza oven and riffing with guests by the big outdoor fire pit.

“The guy loves this industry and being with people,” Spilfogel says. “When he is into it you feel it.”

Most fun for me were the two pizzas they’re most proud of: 1) An breakthrough “BBQ” marvel with brisket two ways, caramelized onions, barbecue sauce, cilantro, cheddar and more; and 2) an East Coast-meets-French-cream-sauce whole-shell clam pizza that Zagouri has been developing for weeks.

For Spilfogel, the biggest fun factor is this chef doesn’t mess around once he’s engaged in a reclamation.

“I can tell you the number one attribute of Jacques in a project like this: Honestly he doesn’t give a f*** how the staff feels about new stuff—and staff likes things to be status quo, no changes to what they’re doing—but he finds a way,” Spilfogel says.

That may sound old-school—especially as an industry reevaluates how to recreate itself—but those who have worked closely with him report it comes from a sincere, albeit battered, heart.

I asked my friend and colleague Nick Rahaim, who worked long hours in the crazy kitchen with “Chef Jac” at Bouchee, for his take. After we enjoyed clam pizza and super-rich Quebec-style poutine.

“He does classic French cuisine with exuberant delivery, frenetic energy, a people-pleasing nature and a wicked sense of humor,” Rahaim says, “which at times only he can get away with.”

The evolving outcome is atypical energy in a tiny city that can be boring when left to the way things have been. That bigger-picture update includes breaking away from stereotypical Carmel dining defaults, Zagouri’s own habits, or how he activates menu items and team members alike.

“We had some talented consultants try to [reinvent] this place but it just didn’t work,” Spilfogel says. “Not with Jacques. In his quirky French way he doesn’t put up with the status quo or stress about people disagreeing with him.”

I asked whether that was at least partly a product of Zagouri knowing from where mortal stress comes.

Spilfogel laughed. “He’s telling them, and telling us, ‘I’m not going to have a heart attack today. This is different. And it’s not gonna kill me.’”

In other words, chef ain’t dead yet. Quite the opposite.

Share your feedback and own Found Treasure via ediblefoundtreasure@gmail.com.