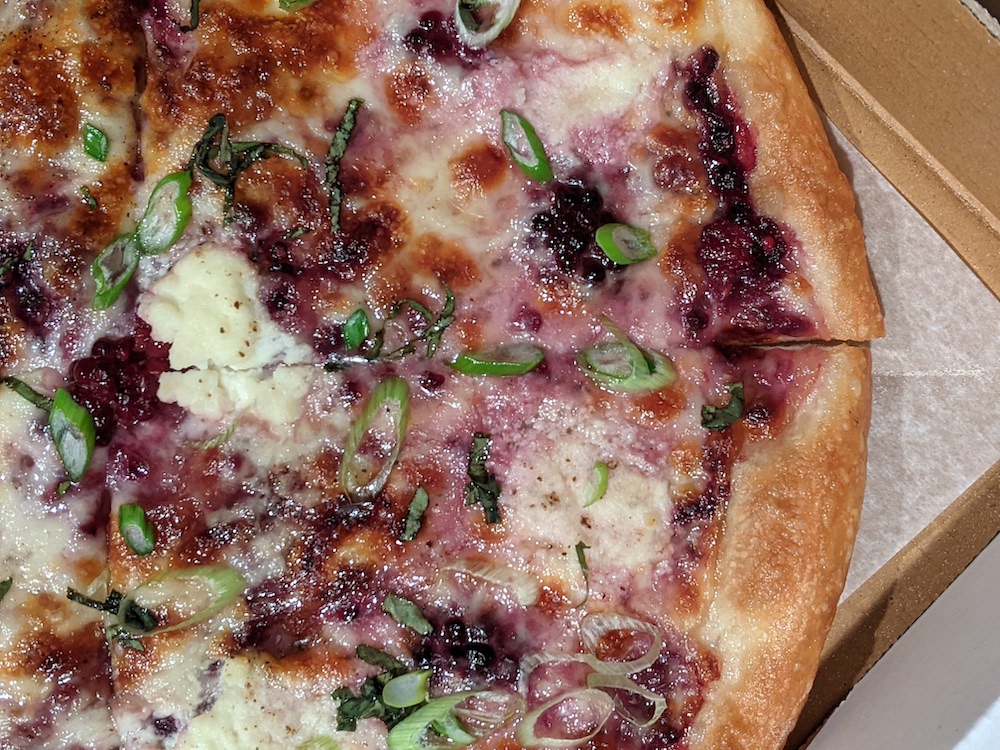 April 2, 2021 – It was a moonless night in New Monterey when I went looking for what turned out to be one of the most memorable pizzas I’ve had in years.

The lack of light meant I couldn’t make out the numbers on any of the houses that rose up the street that looked out over the bay, or the telltale indicator I sought: a blue flag with an orange otter on it, eating a slice of pizza.

But after a minute patrolling the sidewalk and squinting into the dark I spotted the otter. My heart leapt, and I leapt up the stairs. After weeks of drool dripping over pics on Instagram and unsuccessfully ordering—as each day’s pickup slots filled up quick-like—this was really happening (!!).

The pizza master appeared on the other side of the threshold with his mask and three pizza boxes. He asked that I not reveal his name or the whereabouts of his home operation to avoid drama with his landlord, the health department or both.

He also acknowledged that if someone wanted to find his local-ingredient-driven “Monterey-style” pizza on IG, it would be easy enough.

He added two other things: 1) How much he was enjoying supporting himself like this after being laid off from his GM job at a local resort-restaurant operation; and 2) That I should get moving, while the pizza was hot.

If a cheese pizza is a good litmus test of a pizzeria, his “royale with cheese” pie tells you this guy is legit. The mozzarella and pecorino cheeses interplay without overpowering one another, while the char and depth of the 72-hour-fermented dough, as with each pizza I tried, proved superb.

The supreme, one of his standards, tasted better than the sum of its parts, with fresh green bell pepper, red onion, surprisingly successful thin-sliced breakfast sausage and white cheddar. That bodes well for his rotating and ever-evolving specials, which include a Pesto Malone with heirloom tomatoes and Big Sur Sea Salt, the Donna Summer with arugula and a burly ball of burrata, and the Corny Collins with scallions and a corn cream reduction base. If it’s unclear, fun is part of the flavor profile.

But as good as they were, they might well have vaporized into the ether in my own home kitchen after a bite of what’s called the Chuck Berry. In a word, daym.

Chuck tickles both tastebud and imagination with an uncanny combination of heat and sweet and savory—by way of blackberries, scallions, chopped basil, ricotta, mozzarella, provolone, honey and chili flakes.

Blackberry season drove its creator to dozens of trial takes before he found magic. “It goes against what it should be as a berry pizza,” he says. “You’re thinking sweet and delicious, like dessert, then you get a little bit of everything.”

Maybe it’s fitting that a pizza unlike any I’ve had was obtained in a way I’ve never attempted: Namely, on a tip from a foodie friend that led an Instagram page that led to a online order form that led to a Venmo payment that led to breathless anticipation and ultimately a very satisfied feeling.

This Instagram food action isn’t going away any time soon. My colleague Raul Nava is all over it, cataloging around 100 upstart chefs around Monterey Bay on a stacked spreadsheet. (The individual is organized in an inspiring and intimidating way.)

He also dives into narrative depth with his recent feature “A Taste of Home: While the pandemic keeps us physically distant, a boom of cottage bakeries and residential restaurants brings new faces and new cuisines into the local food community.”

“A scroll through Instagram reveals an astonishing array: vibrant quesabirria tacos with crimson consomé for dipping, artfully executed mochi doughnuts, towering sandwiches of crisp Nashville hot chicken, bite-sized Vietnamese shrimp pancakes—the list goes on and on,” Nava writes. “The chefs and bakers behind these foods come from varied backgrounds. Some are steeped in the hospitality industry—out-of-work chefs and servers looking to compensate for lost income, retired hospitality veterans getting back into the business, ambitious cooks selling from home as market research for new concepts—but many are simply amateur home cooks with a passion for food and service.”

As part of his exploration, Nava describes the risk my cloak-and-dagger pizza whisperer evokes: “The murky mess of regulations has created an underground market for homemade foods that’s left operators wary of inviting attention. There are now dozens of MEHKOs in business throughout the Monterey Bay area, but few would go on record to share their experience for fear of attracting scrutiny.

“And they’re right to worry,” Nava continues. “Media coverage and nosy neighbors put home pop-ups at risk of being outed to local health departments and shut down for operating without proper permitting.”

So that’s a wrinkle to consider: Is it OK to support someone trying to make people happy and develop a business but who didn’t jump through the hoops others did? It makes me think about some of the moral quandaries my great grandparents navigated during Prohibition. But it’s hard to think about anything once Chuck Berry’s alchemy of texture and taste hit your lips.

I asked the Chuck Berry-maker how he felt on that front.

“I understand,” he says. “That’s why I was nervous about this piece. Maybe during regular times I’d get more blowback. No one has really challenged me. They understand a guy’s laid off and we’re all trying to make the best of things in a challenging place. I don’t know. It’s tough. It is what it is.”

Leaving that for now, here’s my closing thought on the third installment of a column inspired by compelling flavors hidden under the radar, under our noses, under the cloak of anonymity, or under a combination of all three: Normally I wouldn’t assign further sleuthing to you, but by now we’re well into The Era of New Abnormal.

And I’ve given you enough hints, along with a promise: This berried found treasure, even as it’s now available Mondays only—while its maker returns to resort management but doesn’t surrender his dreams of pizza—is well worth the hunt.