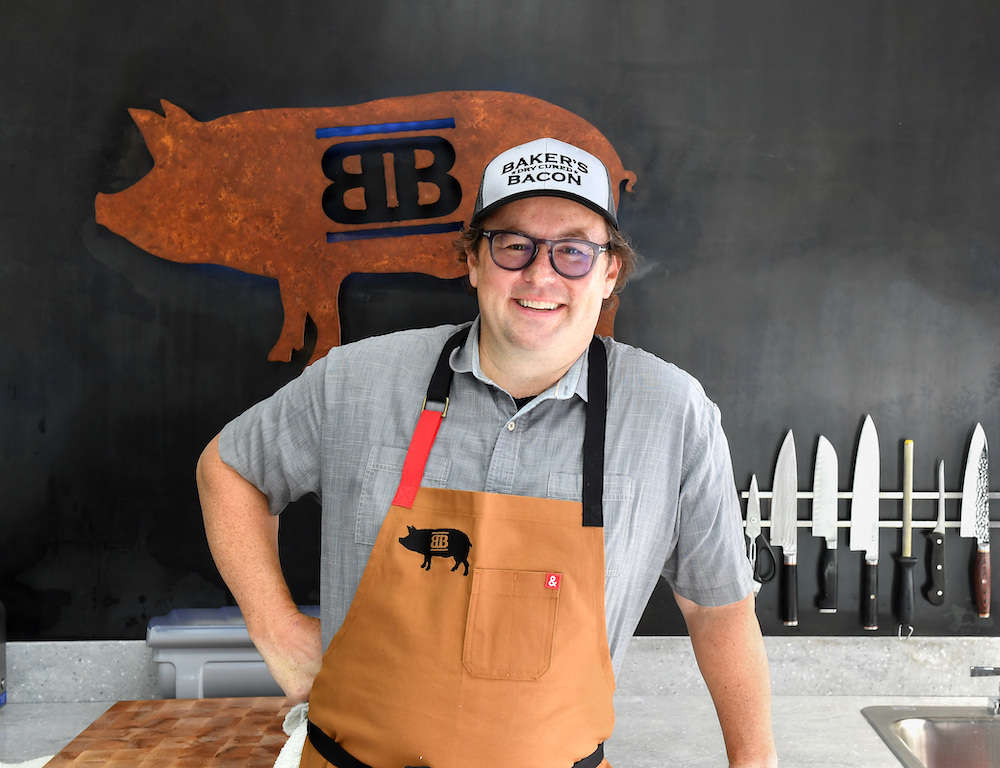 March 19, 2021 – This butcher shop tucks itself away on a thoroughfare better known as a commuter corridor than a finer food destination. It’s near Marina’s city limits, hidden among industrial spaces and business parks, almost invisible—even from directly in front—thanks to an obscuring staircase. That makes some sense, because Baker’s Bacon Company Store was never intended to be a direct-to-consumer operation.

In this case, it was a chance for chef Tony Baker and his small-but-mighty team to pause and repurpose. What was purely a refrigerated clearing house for their fancy bacon, and some offices, was reimagined. Now it’s got new tile, a sleek commercial kitchen, an impeccable deli case, retail coolers and stylish porcine art wrought in dark patinas and oxidized metal.

“We were sitting here twiddling our thumbs like, ‘OK, what are we going to do?’” Baker says. “So we immediately started doing food services.”

The first move was introducing boxes featuring everything from the flagship bacon in bulk bundles to Castroville artichokes to Cooks Venture pasture-raised chicken. Amid early pandemic times, as many as 60 cars would line up on pickup days.

What’s more surprising is the range of boutique mustards, pot “pyes” and even handmade soaps—though after a moment’s reflection, that shouldn’t be so surprising given the sheer number of relationships Baker developed over 23 years as a chef at Montrio Bistro celebrated for, among many things, savvy sourcing. (He resigned his post New Year’s Eve 2019 before the Downtown Dining family of restaurants eventually changed ownership and COVID hit three months later.)

So what was once a boutique deli desert now offers a place for anyone hoping for a spot closer than Salinas or Seaside to pick up, say, a choice of three loaded Bigoli Pasta kits or a stout-steak-and-mushroom-savory-crusted Rogue Pye.

“It’s stuff you can’t get anywhere else around here,” Baker says.

Much of the shop’s action is orchestrated by longtime local chef Brian Copp, whose stops include Montrio, Carmel Valley Ranch and 7th & Dolores. The man behind the recurring 50/50 burger special (made from half sous vide bacon and half ground steak) is loving the lean versatility of the operation, and the chance to wear hats other than a chef toque, whether that’s steering the fork lift or meeting with buyers.

“It’s been really nice to get out of restaurant business and try out a whole different landscape,” Copp says. “I enjoy the sales because I think about how chefs think, what samples to bring, how they might plan out menus. When it’s a chef talking to another chef there’s a nice bond.”

The stated purpose of this new column is to seek out under-the-radar, off-the-menu and otherwise obscure food-and-drink discoveries. Implicit therein is the capers they tend to cultivate. On that front, Found Treasure couldn’t ask for a better avatar than Tony Baker and his wife Tara, and not merely because they are hooked on overland motorcycle and horseback riding. These two have a documented history of seeking out culinary quests, including the moment this winter when they realized supply chains frozen by storms delayed their bacon deliveries for weeks. Rather than make their high-end restaurant clients wait, they loaded 4,000 pounds of pork belly in a BB van and hauled 2,521 miles in 38 hours and 11 minutes to reach Chicago.

Their next odyssey is a doozie. A brand new Baker’s Bacon-branded four-by-four Mercedes Sprinter Van outfitted for off-roading with a winch, plug kits, a chain saw, a hand saw, MaxTrax tracks to escape spin outs, snow chains, a shovel, a CB radio, a wifi booster, a 5g hotspot and—yes—a bacon kitchen is ready to roll.

Come late spring they will be visiting salespeople with upscale supplier Chef’s Warehouse at regional offices from Seattle to Miami to New York City to talk them through and taste them on what makes their bacon worth the sticker price. Hint: It has a lot to do with the fact Baker’s Bacon is double-smoked and dry-cured with a proprietary spice blend that took Baker a year to perfect, made with pork that’s 100-percent heritage and 110-percent habit-forming.

“It’s the best form of selling there is,” Baker says. “I could hire a broker or salesman, but no one’s going to talk about it like I talk about it.”

And there’s another benefit to the trip, which gets to why Baker’s Bacon is right on brand for Found Treasure’s type of appetite.

Baker’s Bacon is located at 445 Reservation Road, Suite G, Marina. Hours are 10am-6pm Monday-Friday. More at (831) 250-0606 or bakersbacon.com. Send any thoughts on Found Treasure to ediblefoundtreasure@gmail.com.