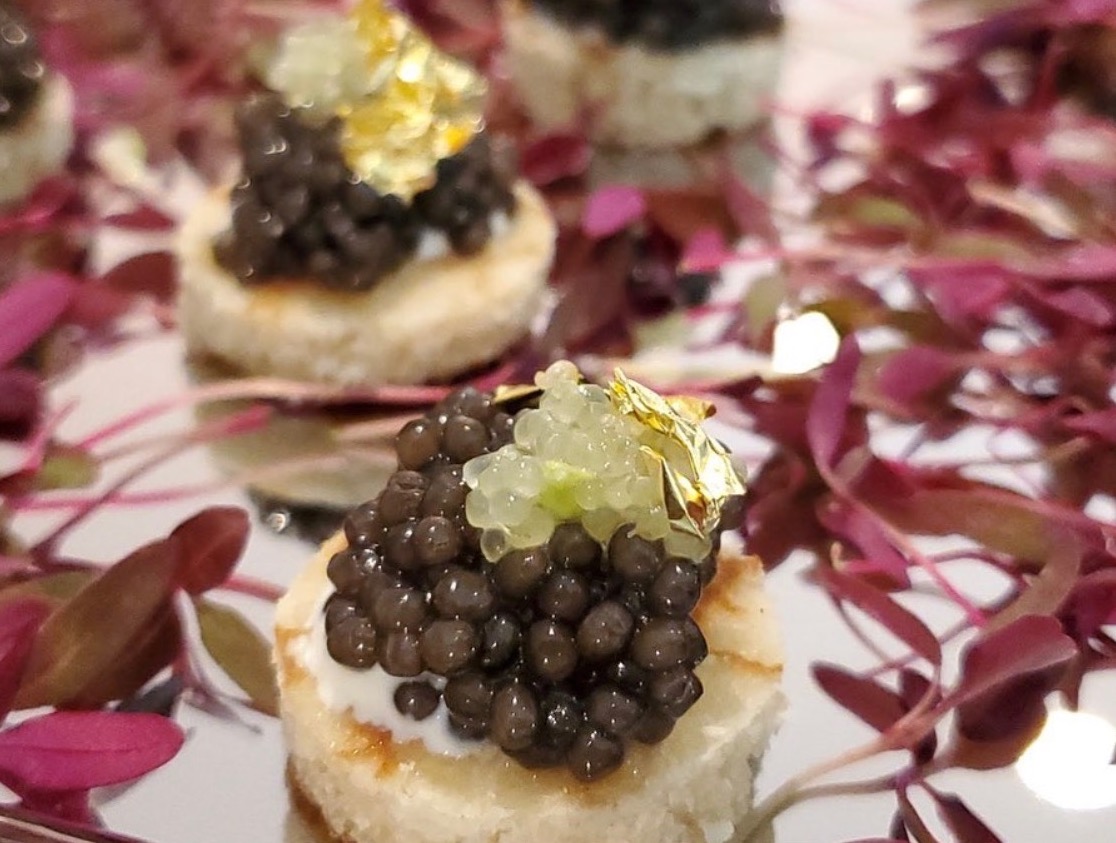 July 28, 2020 – It’s January and at first glance, the woods outside of Eugene, Oregon, seem like an idyllic sanctuary. But there’s a hunter on the loose here.

Listen carefully, and you hear the patter of feet stepping on the damp mud. They hasten in pace. Sniff, sniff—a wet nose and thick, curly brown muzzle peek through the dead pine needles.

Falco’s owner, chef Michael Chang, gently excavates the prized fungi from the dirt. By the end of the day, Falco goes on to find 39 truffles, earning him fourth place in the Joriad North American Truffle Dog Championship at the annual Oregon Truffle Festival.

Truffles are a favorite for chefs, but Chang takes his passion for the luxury ingredient one step further—foraging his own.

Chang and wife Caroline Singer recall hunting for truffles in the forests of Florence and Pisa and meeting the traditional truffle hunting dog breed. When they returned home, they connected with a breeder in Seattle. “Falco found his first truffle in our backyard in Carmel Valley at 10 weeks. We began truffle training with Falco and he loved it,” recalls Chang. “Well, [Falco] kind of trained himself,” Singer adds with a chuckle. Now, they head to Oregon four times a year to hunt for truffles.

While most foodies are familiar with European truffles, Chang is enamored with the famous fungi that grow among Oregon pine trees. There’s an obvious cost benefit—by the pound, Oregon truffles are a tenth the cost of imported Italian white truffles—but there’s also the thrill of finding these culinary “diamonds” in the wild.

Their passion for wild foods forms the root of a new restaurant the pair will open in Carmel next spring—Foray.

“A foray is a guided hike into the woods to find wild edibles,” explains Chang. “We’re planning to highlight a lot of foraged ingredients, like chanterelles, clams, truffles. We’ll have a lot of wild products on our menu, a lot that we hopefully find ourselves.”

Beyond a fondness for foraging, Chang and Singer will leverage their background in culinary hospitality to open Foray.

Chang turned to culinary school after graduating from NYU and realizing he didn’t want a career in finance or politics. He enrolled at New York’s French Culinary Institute (now the International Culinary Center). After culinary school, he headed west to Denver, where he worked at three of the city’s hip restaurants—Bittersweet, Il Posto and Beatrice & Woodsley.

Singer has worked in hospitality since high school. While living in Tuscany after college, she apprenticed with a winemaker in Florence. When she returned home, she began working in wine distribution in Chicago, then Denver.

The two met in Denver five years ago, connected by mutual friends in a shared restaurant family. “Denver was having its own food boom with James Beard-winning chefs opening new restaurants. We wanted to open a restaurant of our own to have control over the schedule so we could see each other,” explains Chang.

Chang and Singer frequently vacationed in Carmel so when it came time to open their restaurant, it was an obvious choice to head here. “This area is beautiful,” Chang explains. “The food grown here feeds the nation and it’s on the coast with access to amazing seafood from the Pacific.” Singer adds, “We knew this was the spot.” The couple moved to Carmel in late 2018 and were married here in September 2019. For the past two years, they’ve hosted private dinners in Pebble Beach and Carmel through their Black Mountain Kitchen catering company to raise money for local charities.

Foray will celebrate the bounty of the West Coast. Chang describes the menu as “West Coast cuisine”—seafood from the Pacific Coast, local produce from the Salinas Valley and, naturally, their foraged finds. “California and the West Coast offer so many amazing things,” says Singer. Chang gives some examples, “You won’t find any Maine lobster on our menu, but you’ll see California spiny lobster instead. We’ll have a truffle risotto, but with Oregon truffles instead of European truffles.”

Singer will oversee the beverage program with wine, cocktails and nonalcoholic options to pair with Chang’s fresh, vibrant cuisine. The season’s harvest will guide both cocktail selections and fresh juices for nonalcoholic options. “Our wine program will be more diverse than the West Coast,” she admits. “We want to push people out of their boundaries of Napa Cabernet with some new, exciting selections.”

Foray will occupy the restaurant space adjacent to the Carmel Lodge at the corner of San Carlos and Fifth that’s been vacant for 12 years.

The space was home to the historic Simpson’s Restaurant & Bar, but it’s best remembered for Kurt’s Carmel Chophouse, operated by Kurt Grasing here in the ‘00s. Most recently, it was home to Simply Cynthia’s, but the restaurant space has been empty since 2008.

“Our biggest challenge has been working with a building that’s been vacant for so long and is so far out of fire and ADA code,” explains Chang. He lists a number of interior improvements—including updated bathrooms and a new private dining room—that will soon be underway. “It’s a major design change,” adds Singer.

The coronavirus crisis of course stays top of mind for Chang and Singer, but they remain optimistic, “It’s been our dream to open a restaurant for a long time, and we’re not letting coronavirus stop that,” says Chang.

Singer is encouraged by how we’ve all become more connected—to our food and to each other—during the pandemic. In that spirit of connection and hospitality, she and Chang are excited to welcome the community to Foray next spring and showcase the wild flavors from their own backyard. “Simpson’s and Carmel Chophouse were beloved spots and we hope to carry on their local legacy,” says Singer.