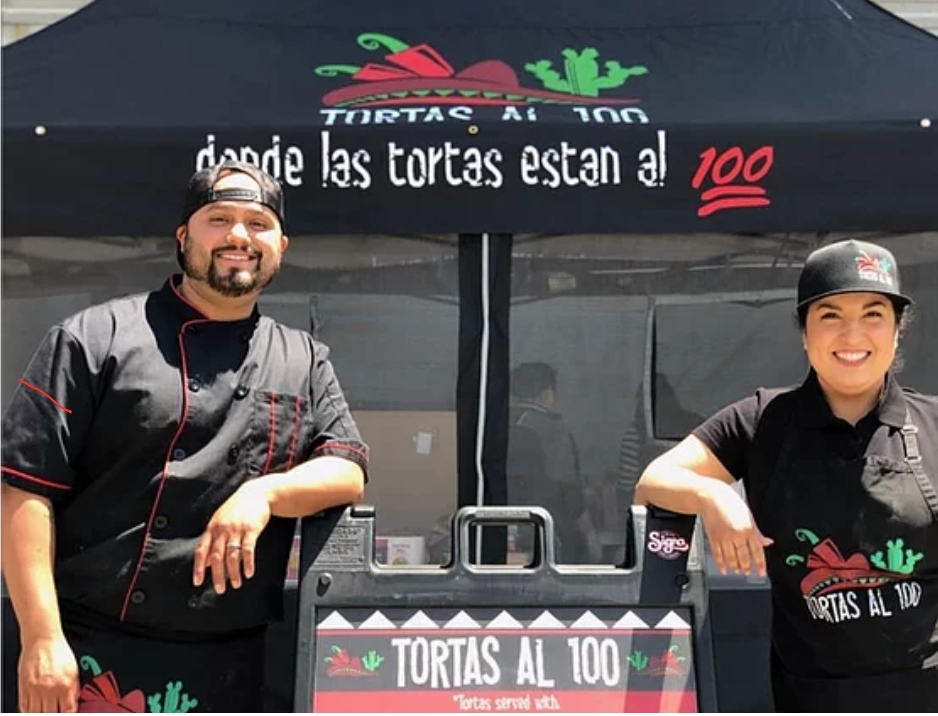 November 17, 2020 – Service has always been important to Orlando Osornio.

The new city councilmember-elect for Salinas’ District 4 is a familiar face for locals who seek out his Tortas Al 100 food truck around town. The truck has grown a fervent following for its epic Mexican torta sandwiches, of course, but also Osornio’s commitment to community and service. Thankful for the support his truck has received over the years, Osornio is now eager to return the favor by representing his community in local government. “There’s nothing like serving this community. They do so much for me, what can I do for them?”

Osornio, 31, first started Tortas Al 100 (pronounced “Tortas Al Cien”) in his driveway cooking for family and friends. With their encouragement, he became a food vendor at the Friday night outdoor market at the Salinas Sports Complex two years ago. He’d set up a canopy tent and grill and start serving up sandwiches. Word of mouth grew and he soon became a regular fixture at many local events and farmers markets. Fans had no problem waiting in line for 45 minutes—sometimes even an hour—for Osornio’s inspired take on tortas.

“When people were saying it was the best torta they’d ever had, we knew we had something. We knew we had to expand,” recalls Osornio. Last year, he made the move to a fully loaded food truck to build capacity. The truck makes regular appearances at the Salinas Friday night market, outside popular Sand City brewpub Post No Bills, or parked for the day on Del Monte Avenue by Monterey’s Lake El Estero. (Follow @tortasal100 on Instagram for the latest on truck popups.)

Osornio’s tortas see creative combinations of meats and toppings towered high on light telera bread. “We have flavors and sazón [seasoning] that you will not find on any other truck,” he says. “The truck is constantly thinking outside the box. It’s pushing the limits to our palates.”

Osornio is quick to emphasize he wants Tortas Al 100 to be known not just for its quality of food, but service too. “We want customers to know they’re appreciated,” he says. “It’s not even about the torta. It’s about getting to know your customer, knowing the people you serve.”

Tortas Al 100 has been a passion project that Osornio debuted on the side. He oversees operations and management, but now has a team in place to handle day-to-day work on the truck while he works full time as a hospice liaison for Bridge Home Health & Hospice.

“Hospice is a tough industry,” admits Osornio, but he’s honored to have the opportunity to help families navigate difficult end-of-life care. “Being able to give them comfort and making sure their loved ones have quality of life with the last parts of their life, it really can warm your heart knowing you’ll be a part of something like that,” he says.

That heart of hospitality and service inspired Osornio to run for city council.

Growing up, Osornio never imagined what path his life might ultimately take. “I wasn’t the kid who wanted to be a firefighter or a police officer or a doctor. I never knew what I wanted to be,” he recalls. “I just knew I didn’t want to struggle like my parents had to.” He describes growing up with his two brothers in East Salinas and seeing the hard work their parents invested in their careers and their family—his father Fidel has owned and operated a landscaping business in Salinas for nearly 40 years and his mother Guadalupe has worked for the school district for just as long.

He also credits his wife, Denise, for inspiring him to give back to the community. The two started dating when they were 14 years old, got married four years ago and recently welcomed daughter, Olivia. “Denise is the most important part of my life. She helped me develop into a decent young man and I’m forever grateful for her.” Both have big hearts for service—Denise is a licensed therapist for a local Monterey County nonprofit organization.

“What my wife does, what I do, what Tortas Al 100 does—it ties into community and serving the community,” observes Osornio.

As a representative on the city council, Osornio expects to leverage lessons learned from the truck and apply them in service to Salinas. Sharp skills in customer service, finance and innovation will translate well to city government. “I hope to bring a fresh perspective to the city council and a willingness to look for every single opportunity to make sure the residents and businesses of Salinas are successful.” He’s eager to dive into issues like housing, infrastructure and economic recovery.

Naturally, the coronavirus pandemic has weighed heavy on Osornio as a small business owner and will be top-of-mind as he joins the council too. “Covid has put our business through the wringer.” He empathizes with Salinas small businesses weathering the unprecedented pandemic and the economic ruin in its wake. He knows all too well the concerns of small businesses and their employees right now—where will my next paycheck come from, will I get enough hours at work, will my staff get enough tips from takeout?  “When your business isn’t as successful as you picture it to be, it can take a toll on you emotionally and financially. There are a lot of sleepless nights.”

Osornio has been humbled to see the success of the food truck—including national press coverage as part of a feature on Latinx-owned businesses in USA Today—and his run for office inspire locals, especially within the Latinx community.

“Never in my wildest dreams could I ever have foreseen any of this,” he says. He recalls a childhood diagnosis with attention deficit disorder and frequent trips to the principal’s office. “I never knew what I would amount to in life. I never knew if I would be successful.” He committed to the work ethic modeled by his mother and father. Now, he has a chance to be a role model for his daughter Olivia and his community at large. “I want to show other young Latinos that people who look like us, sound like us, are like us can do anything.”