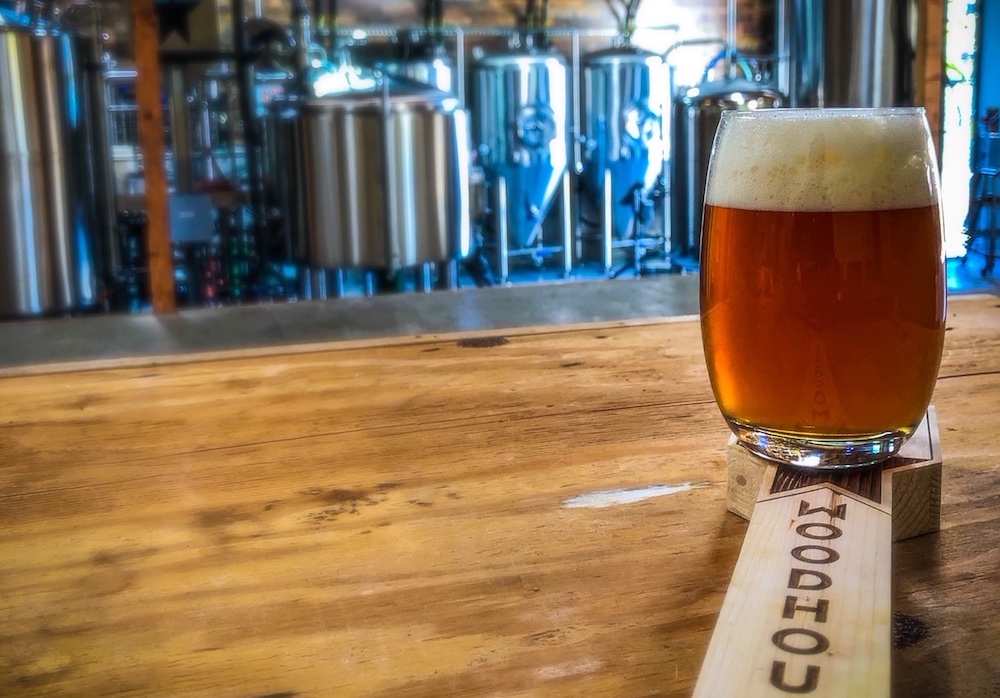 April 21, 2020 – Opening a restaurant is a famously risky proposition even in the best economic times, which makes such endeavors that much more daunting now. That said, I’ve got a delicious suspicion that this list of forthcoming spots will survive, if not thrive, in large part because they’re not new to the hospitality game and what they have done to date has proven successful.

So here are five Santa Cruz area places to look forward to post-pandemic. As I counseled in spotlighting five things to look forward to on the other side of Monterey Bay last week, please please, please be patient. The goal of this exercise is to celebrate some awesomeness on the way, not to add any urgency or impatience.

There is only one tiled image on the Venus Spirits Kitchen Instagram page but it’s enough to captivate Venus’ legion fans, by way of soaring ceilings, natural light, slick design and a loooong bar with a soothing color scheme. The original expected opening date for the 100-seat restaurant and distillery at 427 Swift St., just around the corner from the current location, was April 2020. They were hoping mid-May before construction was halted; at this point, owner operator Sean Venus says, they’ll need less than two months once they’re allowed to resume.

Venus’ team has taken the lull to scheme out its seasonal Americana menu of small plates and shareable entrees inspired by Venus’ spirits and distilling process, including whole seared rock cod. But drinks will be headlining, with classic cocktails, flights, tasting room-vetted house drinks—like the Grapefruit & Grace—and curated liquors from guest local distilleries.

To help keep his workers safe, founder Sean Venus has been the only one on the premises. He admits it’s been a little lonely, but the shift from tastings and cocktails to canned mixed drinks and bottles, via five-days-a-week pickup service, has been surprisingly promising.

“The community has been super supportive, especially on social with posts and reposts,” Venus says. “It’s been fascinating what is happening to our business. You think [coronavirus] would have hurt us, but it’s almost made us stronger in certain ways.”

Many foodies wouldn’t need to hear anything more than: 1) Small-batch mezcal and 2) Award-winning Oaxacan mole before being 110% in.

But the longer formula makes Copal (an indigenous Oaxacan tree) that much more attractive. Gifted Mexican-born-and-bred chef Ana Mendoza, along with Stuyvie Bearns Esteva and Noëlle Antonlin (of popular Lúpulo Craft Beer House) met at Front Street Kitchen, a commissary kitchen in downtown Santa Cruz. They collaborated on several Night in Oaxaca pop-ups that sold out in a hurry, highlighting different types of mole and other deep southern Mexican delicacies. Mendoza went on to take titles at the Mole & Mariachi Festival and the Pajaro Valley Burrito Bash and gather fans via a monthly Oaxacan brunch that she hosts at the Food Lounge in downtown Santa Cruz.

Like Antolin told me earlier this year, “The momentum has grown and we are all ready to take the next step.”

The plan was a February opening at Mission and Laurel. Now they’re thinking there’s no way to know when they’ll start seating diners at a distance.

“It’s so hard to tell,” Antolin says. “We want to open in our full glory but the reality may be our tables are 8 feet apart. We may end up opening with a totally different formula.”

Whatever the format, the backbone of the menu will be handmade moles with a million ingredients—think mole estofado with pork ribs and enchiladas con mole coloradito—and rotating mezcal flights in collaboration with small distribution companies.

Head brewer, co-founder and co-owner Mike Rodriguez brings some serious craft cred to the ‘House tanks with three gold medals, four silver medals, and six bronzes from the hyper competitive Great American Beer Festival alone. That makes him well-qualified to lead a talented team of founders with a stated mission in mind: “To create small batch traditional beers, as well as handcrafted barrel-aged blends, that will inspire enthusiasts, as well as aficionados, worldwide.”

Woodhouse started building its brewery from the ground up in 2017 and started flowing beer in 2018. Creations like Krisp Kristofferson international lager and Something for Something IPA have proved popular in venues like The Sand Bar and The Parish Publick House.

By the start of this year they started converting the brewery’s neighboring space, a former wood mill, into a 3,000-square-foot tasting room and kitchen, with an opening that looks into the brewing area. A base menu of fresh panini and salads will go with six to 10 Woodhouse beers to start, plus guest taps, wine, cider and nonalcoholic drinks. It was close to opening pre-pandemic, so the Woodhouse team is optimistic it can open by July 1 pending city orders.

A practice run of cans in February proved timely as the small-batch operation had to pivot completely to cans (from mostly kegs) once shelter-in-place happened; last weekend co-owner/co-founder Tyler Johansen went on a special Brew Cruz bus delivery run dropping off For All “Intensive” Purposes hazy IPAs and Poco a Poco Mexican lagers in crowlers, which sold out quickly at fre4rmdistro.com.

“Hopefully other breweries will see the response we did—which was super positive—and want to do something similar,” Johansen says.

In the interactions with Woodhouse fans, he adds, there was something familiar, albeit currently missing, that make places like the forthcoming tasting room special.

“Breweries are becoming that third space, much like Starbucks went from just coffee to a place to meet up,” he says. “What I’ve noticed most is not people fiending for the beer, they miss the interaction, seeing that friendly face.”

This operation started as a delivery-only outfit, so owners Justin Williams and Daniel Mendoza were well versed on how to operate when shelter-in-place became the new restaurant reality. For distressed locals, their menu is the epitome of comfort cuisine—fried chicken sandwiches, Spam kimchi fried rice, wings, baked potato fries, chicken and waffles. As Williams describes it, “Stoner cuisine meets Southern food.”

It’s also been a comfort for local health professionals as KC rallied followers to help send meals to the Watsonville emergency room staff last week and has pledged to continue feeding ER crews every week going forward in collaboration with COVID-Meals.

“This is our way of giving back to health care professionals,” Williams says. “There’s still so much struggling going on; there’s never enough we can do. We just want to do our best to help out.”

Pre-pandemic, the plan was to move into a bigger, better space in the former Joe’s Pizza and Subs at 1207 Pacific by the end of spring and add sit-down capacity for 52, local craft draft beer and Santa Cruz Mountains wine. When Kickin’s team finally started construction, the city issued its nonessential work stop. When that’s lifted, Williams anticipates two months of build-out before it opens.

One of the most anticipated restaurant openings of the last few years happened right as Gov. Gavin Newsom issued his stay-at-home order.

The Mentone team took take-out-only as an opportunity to focus on some greatest hits with a slimmed down menu starring 12-inch pizzas made with 48-hour fermented dough and baked in the wood-fired Valoriani oven. On top of the Margherita, sopressata-Calabrian chili pies and a rotating special, Mentone also swapped out its version of a salade Niçoise, the “Insalata di Riviera,” for a chicory Caesar, cocktails and wine to go. (This weekend they debut a frozen Aperol spritz.)

“We figured this would be a nice way of easing into operation,” owner-executive chef David Kinch said when it opened. “Selfishly, it lets us practice what we’re good at, and if we choose to expand we can do so.”

GM Chris Sullivan believes the practice is paying off.

“Pizza’s such a small part of the menu, but we’re getting it dialed,” he says. “We feel really good about the pizzas.”

So do the locals who placed so many online orders Mentone’s platform kept crashing, which inspired a throwback to a different type of dialed in: purely phone orders.

That hasn’t slowed demand. Sullivan can track how many missed calls he has and estimates peak times hit as many or seven or eight calls a second.

“We compare it to a radio sweepstakes for Grateful Dead tickets, people hitting redial a million times at home.” Sullivan says. “I’ll hear the person on the line say to ‘Oh, I got through!’ to the people in the house.”

While fielding orders, he takes the opportunity to “give [callers] a glimpse of our vision.” The pizzas go on sale 11am Wednesday-Saturday and sell out in 90 minutes. Pickup times are assigned 3-7pm to avoid crowding.

To provide a peek at the rest of the dinner menu, a special Sunday Supper series does prepay online with a main, side, salad and gelato to reheat at home.

Mentone’s team was two-thirds of the way through training at the time the essential work shutdown was ordered. Sullivan is eyeing the May 3 date the current order would expire, but anticipates that being extended. In the meantime, he’s enjoying the surreality of the whole affair.

“We’re using muscles we didn’t know we had,” he says.