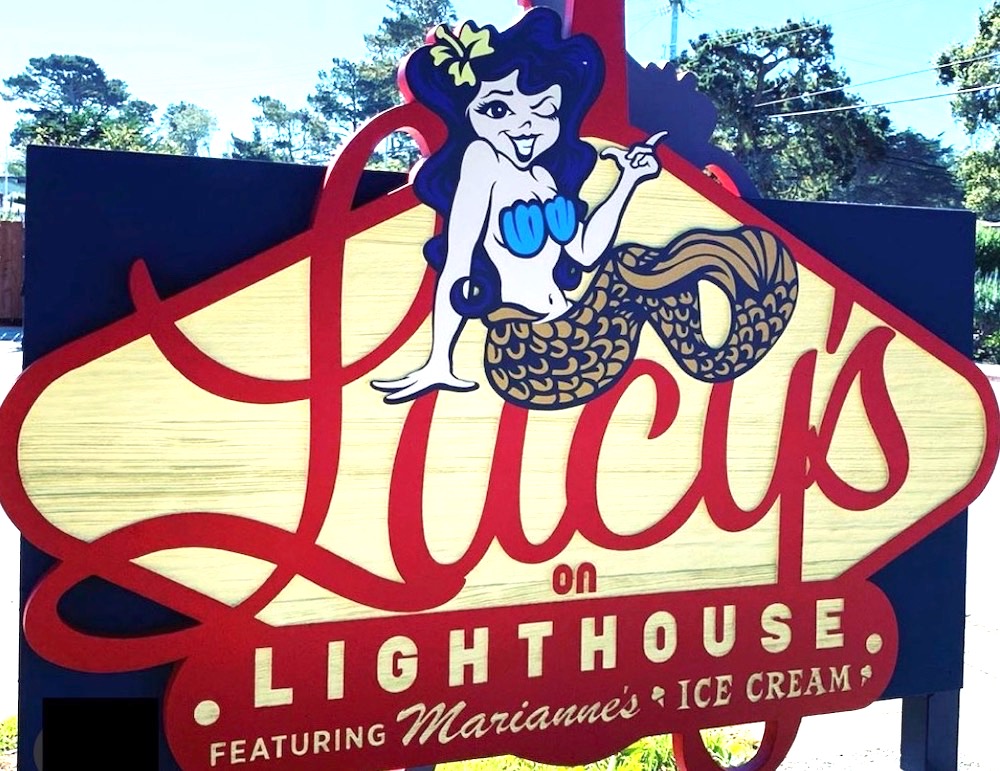 April 14, 2020 – Let’s get a disclaimer out of the way: The point of this story is not to make anyone more anxious or stir-crazy or jumpy about getting out in the world and giving his or her favorite restaurant or market—old or new—a big sloppy kiss.

The point is this: There are some very tangible things to look forward to that are quietly moving along even if it seems like everything has stopped.

Here are a few to anticipate and support with all appropriate precaution, when the time is right; look for more installments of positives in coming weeks; restaurant people please email Edible with any updates.

Despite a bunch of beaches and its share of surf breaks, Pacific Grove doesn’t have many beach-style establishments compared to, say, Santa Cruz. At least that’s how restaurant partners Tamie Aceves and Joleen Green see it. They’re thinking Lucy’s can change this.

“I walk on the beach every day,” Aceves says. “I love the whole beach vibe, but there’s no beach flavor. Why don’t we have a surf shack? Lucy’s channels a little of that shack idea. It celebrates the spirit and culture of Northern California surf and skate.”

It does that by way of 20 different gourmet hot dogs named after local surf spots, like the Lovers Point (bacon-wrapped dog, guacamole, tomatoes, jalapeño, red onion and special sauce) or the Ghost Tree (chili, nacho cheese and tater tots). The dogs are all-beef kosher, with veggie, turkey or Polish sausage options and the option to go lettuce wrap. Sides like tots, fries and Brussels sprouts are named for skateboard moves—think Jammer mac ’n’ cheese with chili and grilled onions and the Blunt salad with mixed greens, cherry tomatoes, broccoli and ranch.

Another featured item is Marianne’s Ice Cream, with 14 flavors and confections like their peanut butter-chocolate-salt bar. Craft soda, beer, wine and espresso round things out.

Urban graffiti style art occupies many of the walls, and on top of surf and skateboarding, nods to Roller Derby’s skate culture too. Co-owner Green competes herself, under the moniker Darby Trash.

It’s all going down in the former An Choi Restaurant, at 1120 Lighthouse Ave. near the Pacific Grove Municipal Golf course, where Aceves operates her catering kitchen. She also owns and operates comfort-food capital Crema, which is comforting for hot dog and ice cream lovers like the author of this piece.

“It’s a total passion project for me,” Aceves says.

The name isn’t finalized. “Shelter in Place (aka SIP)” and “PG Ferment” are also in the running, and its owners are open to name suggestions via pgroovebrew@gmail.com. But the fundamentals are in position, namely a short curated list of locally focused guest beers, a handful of house brews and a small but tasty menu of snacks.

The fact that they will eventually be building in a laundromat is another key because it carries a lot more water credits than most properties. For now the spot at 511 Lighthouse Ave., next to Lighthouse Movie Theater across from old Pier 1, spins on as a laundromat (wisely deemed an essential service), as it will until construction can begin.

The three principal partners include John “JP” Papandreopoulos, a beer connoisseur and general contractor, which is key because they’re ambitious about the new layout; Mike Durrant, a home brewmaster with California State Fair Homebrew Competition and Romancing The Beer Show awards to his name; and Ximena Waissbluth, longtime ocean advocate and Surfrider president who happens to love craft beer herself.

“Right now everyone’s dealing with hard times, and it can be natural to dig into the suffering,” Waissbluth says. “But there’s a lot to look forward to.”

When asked about production quantity, she says, “We’re somewhere between a nano- and a micro-brewery.” For a city famous for being the last dry town in the state, this represents a tasty bit of history.

“I’m excited to finally have a brewery in Pacific Grove, something close to home,” Papandreopoulos says. “I can’t wait to get our locals out there. Safely.”

The vision for Elroy’s is hard not to get excited about, as Edible reported in fall: A 6,000-square-foot boutique grocery featuring New York-style deli snacks, organic and biodynamic produce, craft beer, prepped sandwiches, barbecue, seating areas indoors and out, a smoothie bar and much more.

Former Carmel Belle owners Chloe and Jay Dolata have had plenty on their plate cleaning out the long-time Monte Vista Market, framing the new layout, building their list of curated purveyors, and evaluating potential meat and seafood partners.

They’ve also been fine-tuning their plans for a substantial bulk section. Plans for self-serve has been scuttled in the context of coronavirus fears and full-service concierges are being planned to fulfill orders.

They’re hoping to open as soon as June to help people get to their groceries.

The Lighthouse Avenue institution had an ambitious reinvention underway well before Shelter in Place protocols dropped. And before that, it had its formula of classic pub ambience, sturdy drink values, pro staff and underrated kitchen dialed well enough to get voted Best Neighborhood Pub and Best Bar for Darts multiple times. None of that’s changing, it’s simply scaling up.

Christine Kerr has owned the Bulldog for 13 years. Even with a brand new kitchen in the former laundromat next door, she believes the biggest difference will be the sheer square footage.

“It’s going to be a great space,” she says. “Before we filled up fast and didn’t have nearly as much room.”

That will allow for bands bigger than duos, DJ dance floor, fight nights and special events.

“I think people are going to be shocked—and excited,” “It will still feel like the Bulldog, it’s still the same people. We all grew up there, we’re just a little bit older.”

She defers on a conservative and/or hopeful re-open date given so many uncertain variables and pre-construction work stop delays.

The English beer selection will remain, joined by greater cocktail variety. And Kerr makes a point to add, “You can still get a Bulldog burger.”

The cult hit next door to the Bulldog survived for years with a closet-sized space and almost no storage, which meant stylish ‘chos sold out quickly. Now it’s getting a significant expansion. The biggest upgrade: a real kitchen which allows for a customized setup with workflow in mind and a whole new set of possibilities for eaters.

Previously limited hours will widen into lunch and feature a 5pm happier hour. A new connective service window will allow people in the Bulldog to order more easily once they stop dishing dinner next door.

“I’m really excited about having a kitchen that’s capable of doing what we want,” Montez says. “We have all these ideas that we can execute with the creativity and efficiency that they deserve.”