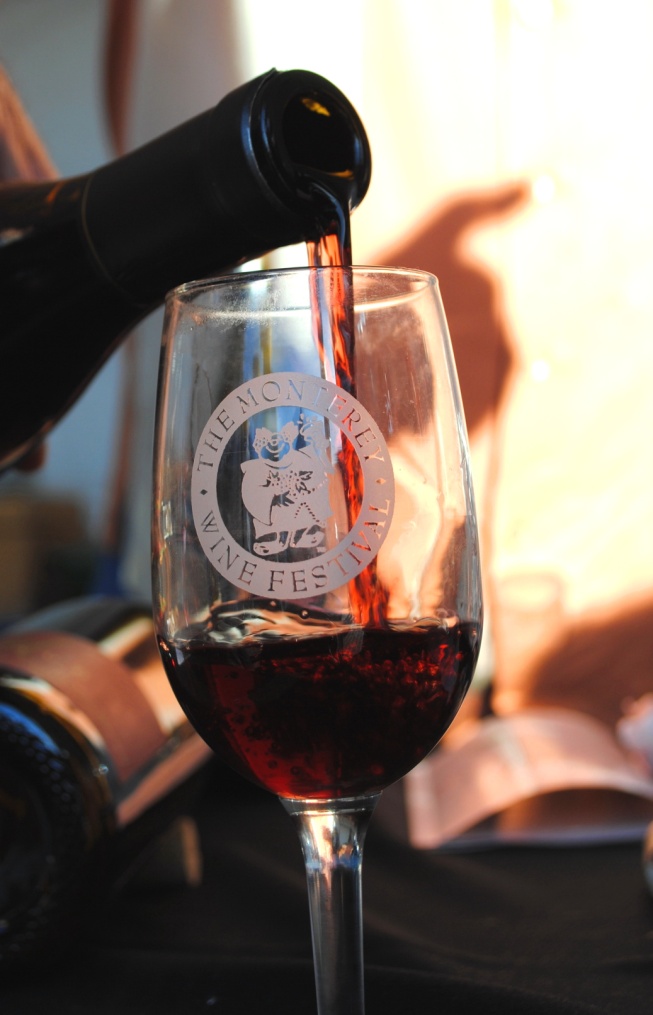 Taste. Sip. Swirl. Enjoy. Those were the orders from California’s longest-running wine festival, which celebrated its 36th anniversary this year.

The festivities at the Monterey Wine Festival kicked off on June 8 with a Friday evening event—“A Night to Celebrate Reds”—at Monterey State Historic Park’s Custom House Plaza and continued through the weekend with more food, more wine, and more fun, including the West Coast Chowder Competition and the Bartenders Fedora where local bartenders competed for the title of “best cocktail.”

While the festival does not come close to descending into bacchanalian madness, it is a celebration of the vine that would make Bacchus proud.

On Friday evening, when I attended, it was a celebration of red wines from more than twenty different vintners, hailing from all around the state. After waiting in line to enter the gated waterfront plaza, and then waiting in line to get my wine glass, I headed off to do as charged: taste, sip, swirl, and enjoy.

The featured reds ran the flavor-gamut from the accessible to the aggressive. Pelican Ranch Winery, from Capitola, poured a Pinot noir with subtle undercurrents of cherry while D & L Carinalli Vineyards, from Sebastopol, presented a smokier version of the same varietal. Pierce Ranch Vineyards, located between Bradley and Lockwood at the southernmost tip of Monterey County, offered a limited production Graciano with strong notes of blackberry and olallieberry. And Hollister’s Pietra Santa Winery put forward a plummy Vache.

Festival attendees had the opportunity to taste not just wines but also edible morsels. Carmel’s Forge in the Forest offered platters of innovative treats such as sesame-encrusted seared ahi atop deep fried lotus root with a dot of wasabi cream. Columbus Salumeria, based in San Francisco, sliced up several varieties of its classic and artisan salumi. And, perhaps the busiest table in the plaza housed the Morro Bay Oyster Company, which was shucking and serving up its Pacific Gold oysters right next to KORBEL Champagne Cellars. Oysters and champagne. Yes, please! As busy as he was, Neal Maloney, the owner of the Morro Bay Oyster, took some time to chat with me. Maloney founded his company in 2008 and has formed strong ties with local chefs, loading up his bounty each week and driving to provide numerous spots with hand- harvested oysters. He described his typical Thursday morning: at 7am, harvesting begins; by 9am, he’s loaded up, and until 3pm, he’s delivering to restaurants such as Lokal, in Carmel Valley, and Schooners Coastal Kitchen and Bar, on Cannery Row. The schedule is arduous, but it ensures that the oysters make it from bay to plate in less than twelve hours. And if there are any oysters that aren’t sold and served, Maloney retrieves them the following week, returning them to the bay where they are allowed to grow for at least another month before he re- harvests them.

His environmentally sustainable techniques have led Morro Bay Oyster to be recognized and highlighted by the Monterey Bay Aquarium’s Seafood Watch program. The farm lies on 134 acres that Maloney has leased long-term from California’s Department of Fish and Game. In the shadow of Morro Rock, a unique volcanic formation that was once an island and now stands sentry at the mouth of Morro Bay, smaller rocks have eroded from the behemoth, forming jetties and creating an estuary in which Maloney’s crop thrives.

Maloney explains that the flavor profile of the oysters changes throughout the year, depending on the salinity of the water. During the spring, when fresh water gushes from an underwater volcanic aquifer, the oysters are mild, sweet and have a melon finish. During the summer, when the water grows increasingly concentrated and salty, the oyster flesh gets creamier and pairs well with a salsa fresca that is heavy on cucumber. But, Maloney asserts, “For oysters this good, you don’t really need anything beyond a squeeze of lemon.” I nodded in agreement as I swallowed another oyster.

As I made my way around the festival, I stopped to sip some brandies from Osocalis, an artisanal distillery in Soquel, on the Santa Cruz side of the Monterey Bay. The name Osocalis is the original, Native American name for Soquel. Osocalis’s small production team, headed by Daniel Farber and Jeff Emery, adheres to Old World methods of production, using an antique copper alembic still imported from Cognac. Because my knowledge about brandy bordered on nil, I was lucky to get a quick distillation education while tasting the three brandies they were pouring. Brandy, in case you are as unfamiliar with it as I was, is a distilled wine and short for “brandywine.”

Owen started me off with their youngest offering, the Rare Alambic brandy. The Rare is blended from brandies distilled from several varietals with an emphasis on Pinot noir, Semillon and Colombard. After the bright and floral Rare, I moved on to their XO, which consists mostly of 15-year-old brandies and has a softer, nuttier flavor. Finally, I sipped the Heritage. At least two decades old, the Heritage teems with an alluring spiciness that was delightfully subtle. Owen called that complex flavor “rancio.” Part spicy, part fruity, part nutty, there were notes of clove and cinnamon with hints of cedar and leather. I am a brandy-convert. This is definitely a libation to sip and to savor. Michaud Vineyards is the only winery I’ve ever seen bring a mason jar full of soil to a tasting. Yes, soil. Dirt. Maybe it’s because I am a perpetual inhabitant of testosterone land—with a husband and two small boys in the house—but that jar of dirt drew me to their tasting table a few years ago, the first time I ever encountered their wines. Intrigued, I remember that I placed my wine glass on the table and was instructed, “Swirl that. Take a whiff of the dirt. Then taste the wine.”

This time around Michaud didn’t have a mason jar of dirt with him, but, when I asked, he fished a vial of the substrate from his vineyard out of his bag. He talked to me about the minerals below his vines—decomposed granite, limestone formed from the decay of marine organisms, and pink feldspar—and he discussed how they affect the character of his wines.

Michaud does all of the winemaking and most of the farming himself; he relishes getting his hands dirty and stays involved with the wine production from beginning to end. He says, rightly, that that’s the only way he can guarantee the quality of his wines, which are a tribute to the elements that make up their composition. The aroma and taste, he claims, should reflect the soil, the sun, and the grape varietal. Though I tasted all of the wines Michaud brought to the festival, his Syrah was my favorite. Racy and peppery—Fantastic. Give that a swirl if you have the chance.

Vintners arrived from all over to be a part of the festival—from the Alexander Valley in Sonoma to Bend, Oregon—but on this night honoring reds, I wanted to do just that. I wanted to savor the wines and tastes from around the Central Coast. Though I thoroughly enjoyed everything I tasted, the Morro Bay Oyster Company, Osocalis Distillery, and Michaud Vineyard impressed me. Bravi. Thank you for the fabulous evening. Until we meet again…