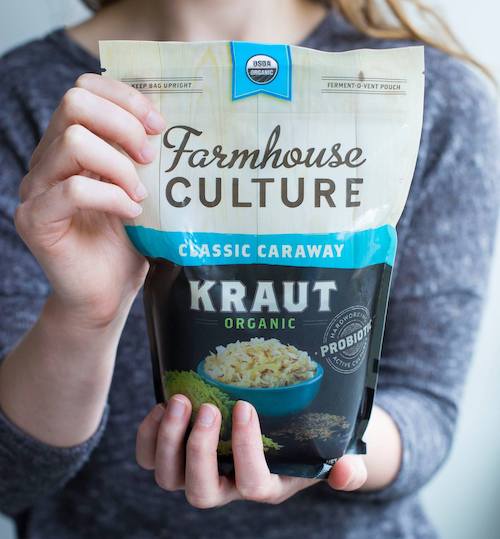 June 25, 2019 – The Santa Cruz-born and Watsonville-based kraut company Farmhouse Culture, which pioneered probiotic-rich fresh kraut, is moving to the Midwest. Sunday is its last day at the Watsonville manufacturing plant and farm, owned by Dick Peixoto of Lakeside Organic Gardens.

Founder Kathryn Lukas says manufacturing will now be handled by the nation’s largest sauerkraut maker, Great Lakes Kraut Company in Bear Creek, Wisconsin. “Our move to Wisconsin was a fairly dramatic decision, it was hard,” she says.

Lukas explains that the business had long-ago outgrown its 26,000 square foot facility and 19-acre farm in Watsonville and was looking for a new home. “It was going to cost several million dollars to get a new factory up and running and we just couldn’t find a place that was a good fit for us,” she says, noting that cannabis grows have run up real estate prices locally.

The Farmhouse Culture team has been working with Great Lakes Kraut Company—also known as GLK Foods—for the past 18 months to make sure it would be able to manufacture a product that meets their standards and taste requirements.

“They are super nice people and it’s a family-owned company that’s been making sauerkraut in the midwest since the early 1900s for four-generations,” she says. They have planted organic cabbage, just for Farmhouse Culture, and after lots of back and forth, she says they finally decided to “push the button.”

The move includes a re-branding for Farmhouse Culture, which will unveil new packaging and a new website on July 8. “The product is changing a little bit, since it’s going to be made in Wisconsin,” Lukas explains. “In California we grown green cabbage, but in the midwest they have white cabbage, which is more traditional for sauerkraut, a little sweeter and just delicious.”

After some company shake-ups last year, she says, “We’ve got our crunch back!”

The headquarters for Farmhouse Culture is moving to Chicago, home of new-ish CEO Scott Lerner, who was hired last November. Lukas—who remains involved in recipe development, new products and marketing—is based out of her RV, spending time recently in the Sierra Nevada, Tucson, Carmel Valley and Santa Cruz.

She is also getting ready to release a book called The Farmhouse Culture Guide To Fermenting, written with her son Shane Peterson. Published by Ten Speed Press, the book will be released on August 27 and the authors will be appearing at Bookshop Santa Cruz on September 12 to sign copies and give a fermentation demonstration.