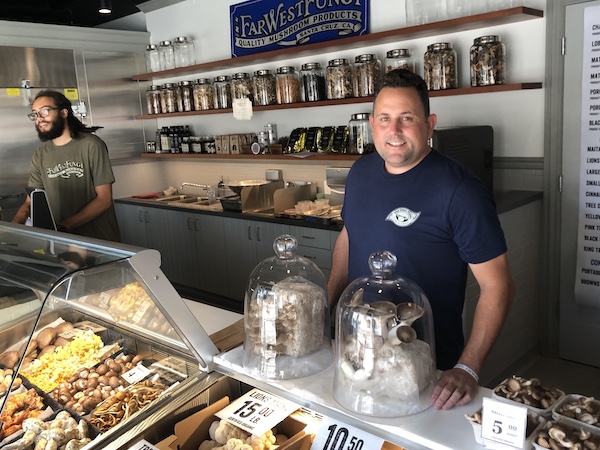 October 15, 2019 – Just in time for the mushroom season, Far West Fungi has opened a brick and mortar shop on Laurel St. in downtown Santa Cruz. The culinary mushroom specialists have a family farm in Moss Landing and a small retail location in the Ferry Building in San Francisco.

At 1,000 square feet, the Santa Cruz location is four times larger than the SF outlet and includes foraged and cultivated mushrooms, fresh and dried, along with growing kits, truffled foods and a tiny mushroom-centric café.

“The shop has been in the works for the past two years,” says CEO Ian Garrone. “We have been asked to open shops in Pike’s Place Market in Seattle and in Santa Monica and many other places around the country, but we chose Santa Cruz because we’ve been coming here for the past 14 years to take part in the Fungus Fair and there are so many people in this area who are into mushrooms.”

Far West Fungi cultivates dozens of different types of culinary and medicinal mushrooms at its Moss Landing Farm, which was started by John and Toby Garrone 35 years ago and is now run by their four adult children, while the founders travel, attend mycological conferences and pay less attention to the day-to-day operations.

Oyster mushrooms, shiitake, lion’s mane and reishi are some of its most popular cultivated varieties. They are also working to introduce the small cinnamon cap mushroom, which is said to have a meaty, citrusy flavor.

“I hope chefs from the Monterey Bay area will come in and take a look at all the products we have here,” says Ian, adding that they have 115 restaurant clients in San Francisco who either shop at the Ferry Building stall or order for delivery. Its hoped that the Santa Cruz store will spark the imaginations of local chefs and inspire more mushroom dishes on their menus.

There is an entire corner of the market devoted to black truffles, with high quality truffle products, many imported from Italy and a refrigerated section with truffle butter and Mexican huitlacoche.

Amateur mushroom-growers will be in heaven at the new store, which sells grow kits as well as petri dishes filled living cultures of various mushroom varieties, that can be used to inoculate growing substances and cultivate thousands of mushrooms at home. Non-edible mushroom-related products from tote bags to playing cards and identification guides can also be found in the shop.

The mushroom-centric café will have a rotating menu that changes as wild mushrooms come in and out of season. Right now there is a hearty mushroom-barley soup on the chalkboard, a mushroom pot pie, lion’s mane lobster roll, mushroom toast and mushroom ceviche.

There are foraged drinks on tap, like spruce tip or wild huckleberry sodas, reishi tea and ginger-turmeric-orange kombucha. Verve coffee will be added to the café menu shortly.

Mushroom lovers tend to be quite the gourmets, so when asked about his favorite way to eat mushrooms, Ian offered his simple and delicious recipe for roast chicken. He fills a cast iron pan with black pearl and shiitake mushrooms, along with whatever else he has around. He drizzles a little olive oil over the mushrooms. Then he seasons a whole chicken with herbs and places that on the mushrooms and puts it in the oven until done. He says the mushrooms crisp up in the chicken fat and the whole family loves it.