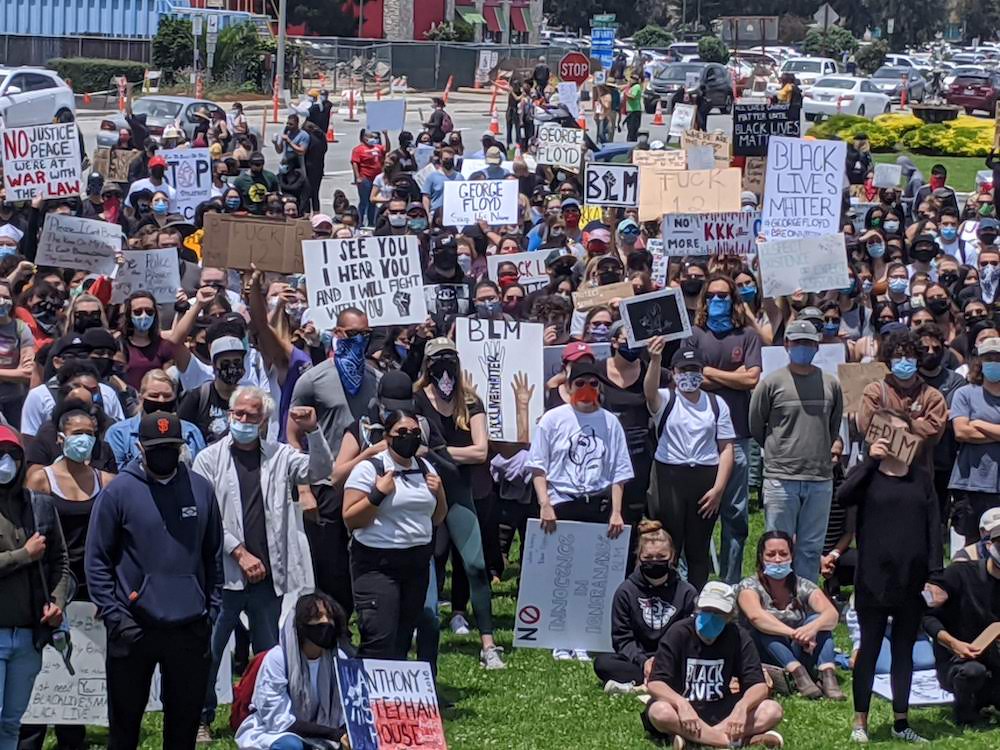 Monday, June 1 – Rev. Rob Fisher was standing in front of his St. John’s Church on Pennsylvania Avenue in Washington, D.C., handing out granola bars and bottled water to protesters, and generally not planning to make international news. He left his staff for a moment to field an interview about a fire that had been started in the basement of the church by a rogue protester the previous day. Not long after he stepped away, his team found itself fleeing tear gas and pepper spray.

Fisher co-founded Edible Monterey Bay with his wife Sarah Wood. He knows good flavor when he tastes it. Tear gas is not it. But the tear gas was not the only thing which disturbed him. More distressing things would come next.

Seaside Mayor Ian Oglesby was standing on the sidewalk on Broadway Avenue/Obama Way Saturday, May 30, wearing a Census 2020 button, a facemark and watching around 400 demonstrators stream by carrying signs and chanting things like, “No justice, no peace, no racist-ass police.”

I left the flow of marchers and joined him on the sidewalk, just about a block away from a black-owned cafe/eatery. I asked him what he hopes emerges from the civil unrest here, which was triggered by the fatal police brutality visited on George Floyd in Minneapolis, Minnesota.

“I just hope everyone here votes,” he said, “and doesn’t just tear things up.”

Agreed. That would be a great outcome. But if this moment is to become a movement—a true turning point—a whole range of other things, well beyond voting, will need to come next.

Rev. Harold Lusk was standing on a city electrical box with a megaphone on Saturday when he said something he’d repeat today, Tuesday, June 2, in front of roughly 1,000 people gathered at Seaside City Hall. The vast majority wore masks. Hundreds carried signs. Nearly everyone raised a right fist in the air for a two-minute observance of silence and later sang “Lean on Me.”

“Look around you,” Lusk boomed. “See who is standing next to you. It’s not one color. It’s not two colors. It’s a people. If we don’t unite as a people, change is not going to happen.” Which gets right at the importance of what comes next.

The tear gas and pepper spray on St. John’s also made it difficult to breathe. It came in conjunction with flash bangs and officers on horseback forcibly dispersing peaceful demonstrators so President Donald Trump could cross the street to Fisher’s church to pose in front of it with a Bible raised aloft.

Rev. Mariann Budde, bishop of the Episcopal Diocese of Washington, suggested to NBC News an unannounced visit might’ve been welcome under different circumstances.

The surprise pop-in, which Budde says was the first since the morning of his inauguration, came on the heels of a Rose Garden press conference in which he announced both, “I am an ally of all peaceful protesters” and his willingness to deploy quick military force should governors hesitate to deploy the National Guard “in sufficient numbers that we dominate the streets.”

The visit was not exactly how former EMB co-publisher Fisher, who previously presided over Carmel Valley’s St. Dunstan’s Episcopal Church, wants his house of worship used.

“We want St. John’s to be a space for grace, as a place where you can breathe,” he told The Washington Post. “Being used as a prop, it really takes away from what we’re trying to do.”

In the aftermath of the incident, Fisher has been deluged with interview requests. Last night he appeared on CNN and Fox News.

“We have had a long history, but we’ve never seen anything like this,” he told CNN. “It was really kind of shocking. It troubles me deeply that people were removed from a peaceful protest, right on our square, by tear gas.”

He is accustomed to using food and faith as binding agents, sowing common ground rather than cultivating differences.

CNN’s Don Lemon asked Fisher what he is praying for in regards to the protests.

“I pray that the message is heard,” he said.

To his credit, Mayor Oglesby and the city of Seaside do have more in the works than get-out-the-vote hope. He reports Seaside PD is exploring how to engage its officers in the EPIC peer-intervention program developed by the New Orleans Police Department, in collaboration with community partners, to promote a culture of high-quality policing.

Per NOPD, EPIC—an acronym for Ethical Policing Is Courageous—“educates, empowers, and supports the officers on the streets to play a meaningful role in ‘policing’ one another [and] teaches officers how to intervene to stop a wrongful action before it occurs.”

On top of cops, Oglesby emphasizes empowering community members to be “active and not passive bystanders.” Moreover, he wants them to inform police policy directly through a citizen-led police advisory committee.

”We have to have something come out of this,” he adds.

That’s a good start, but it’s only a start.

“Truly the very, very least thing you can do is not stay silent,” Phenomenal posted on Instagram. “If you want to do more, we recommend donating to black-led organizations such as the Black Visions Collective in Minneapolis. If you want to do even more, there are tons of other resources circulating. This is just a reminder to do your part and speak up.”

Other nonprofit organizations to consider include The Leadership Conference on Civil & Human Rights, Color Of Change and The Movement for Black Lives, which is currently conducting a Week of Action in Defense of Black Lives. A good place to encounter tools to fight racism is Anti Racism Resources, compiled by civil rights advocates Sarah Sophie Flicker and Alyssa Klein. It collects all sorts of helpful organizations to follow, movies to watch, books to read, podcasts to listen to and resources for parents to explore.

Then there are the black-led organizations in Edible Monterey Bay’s wheelhouse, namely local food-and-drink spots. Two black-owned businesses appear along the route of the Broadway/Obama Way march.

Hem Nutrition is a clever and contemporary healthy-tea-and-shake bar with a familial feel to its shop, social media and overall energy. It’s owned by Seaside native Asia Smith, who is featured in a recent long-form Edible Monterey Bay piece that spotlights a new, diverse, youth-centric Seaside food scene renaissance.

She’s been proud of how the protest participants moving back and forth in front of her business reflect the “multitude of faces and backgrounds and age groups” in her home town.

“It’s been really beautiful to see the way people have organized and come together and join around an idea so quickly, to see the amount of young people, people in my generation and the generation after me,” says Smith, who is 29. “I’m humbled by the people who are out there and are willing to be present whether they have the answers or not.”

She says she doesn’t so much think about being a rare demographic in her field as she does about cultivating community.

“I try to show up each and every day as authentically as I can—I can’t show up as anyone but myself, and I don’t know how to be anybody else,” she says. “We’re unapologetic about our diversity. We speak about what’s happening. We set our culture for seeing people for who they are. Everyone is welcome here. We want people to be able to let their shoulders down a little bit.”

“That was one of the draws why I wanted to open a restaurant,” Choates, who is meeting tonight on how to reopen safely and is planning a social barbecue for July 4 with live music. “There was just no real restaurants in Seaside that do a crossover of American and African-American.”

But Smith and Choates remain the exception to the rule. During non-pandemic times, Michelle Simpson does informal fish frys at The Men’s Social Hall on Del Monte in Seaside, but that’s a once-a-week pop-up. A Monterey Peninsula-based food supplier contacted for this piece—whose job it is to connect with restaurant owners—couldn’t name one black restaurant owner he knew. Insiders in Salinas can’t ID a single one there either.

Edible reached Rev. Lusk as he was manning the grill for hot meal and grocery distribution, which happens at his Bethel Missionary Baptist Church 4-6pm Tuesdays, 4:30-6pm Thursdays and noon-2:30pm Saturday.

He says the most inspiring thing about recent days in Seaside has been the simple amount of response.

“It’s great everyone came out,” he says. “They came because they are tired of the things going on the way they are.”

He thinks the best next step is a meeting between leaders from cities, the county, faith-based organizations, academia, youth groups and more.

“We need to sit down and say how can we collectively, as a community, work on this so the next generation doesn’t have to repeat what we’ve been doing,” he says.

He adds it’s important to remember 400 years of repeated errors extend beyond African Americans, to Jews, Native Americans, Latinos and a segment of Caucasians—and that the men and women in blue are humans too.

“Erase the color,” he says. “Focus on the humanity.”