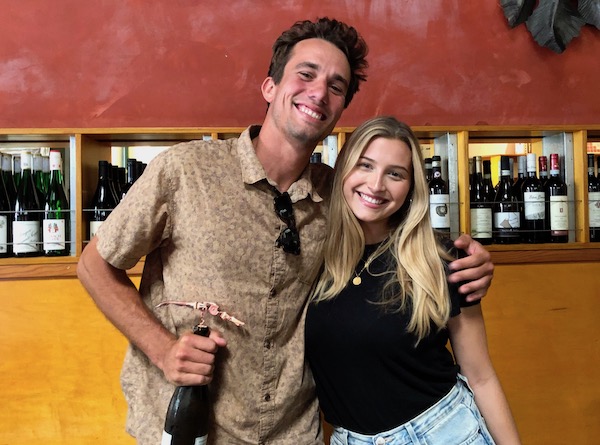 July 23, 2019 – Hats off to Soif retail manager Alexis Carr for organizing the young Santa Cruz Mountains winemakers tasting held there on Sunday. She brought eight of the region’s most interesting and talented vignerons together to share their wares and their stories, demonstrating how a new wave of winemakers are leveraging mainstream and non-traditional practices to bring fresh new perspectives to this storied winemaking region. The scene was one of excitement, suspense and discovery—with a cool Santa Cruz vibe. In short, it was exactly what you’d expect when you pack passionate winemakers into the same room with a bunch of equally passionate wine lovers of all ages.

It’s fair to say that everyone who attended learned something, whether it was that they could buy half a bottle of wine in a can from Companion for $10 (the Riesling made by Ryan Stirm was the bomb) or that you can combine Malbec and Chardonnay to create a beverage unlike anything you’ve tasted. Brent Mayeaux of Stagiare lives and loves to push boundaries: he calls the wine “Cheeky Bisous,” French for cheeky kisses.

Having spent some time in France, where blending grapes from different regions like that would be met with frowns of disapproval, you could say Mayeux has found his happy place in Santa Cruz. He’s working with kindred spirits Ryan Stirm, Megan Bell and James Jelks at JP Palowski’s River Run winery facility in Aromas, where Mayeux says each brings something to the table.

“Megan is an awesome winemaking talent and brings her business sense, James is super disciplined and organized and Ryan is a phenomenal winemaker and our ringleader,” says Mayeaux.

He’s not throwing words around. Megan Bell’s Margins wines showed absolute mastery of the “marginalized” varietals she chooses to showcase, including her 2018 Chenin Blanc (Clarksburg) that we’ve come to love, and the floral headtrip 2018 Muscat, a tropical perfumey perfection from sniff to sip. She likes leaving the grapes, even the whites, on skins for two days before fermenting. They’re bone dry, filled with lipsmacking fruit and finish with finesse. A real eye-opener is her fresh as fresh can be 2018 Pinot Noir from the Makjavich Vineyard in Happy Valley, which saw no new oak. Light and airy, but with a firm acid beam, it’s somewhere between a rosé and a table wine. This is the first time anyone has made wine commercially from these grapes. If you like your Pinot to be ethereal, on the way to angelic, this is it.

James Jelks of Florez Wines pilots his own boat with a firm hand on the tiller. He rocked a suit with confidence in a place that doesn’t do suits, but he could care less. His wines speak for themselves. But he’s not shy about sharing their provenance. The 2017 Moonmilk Chardonnay from a vineyard in Scotts Valley, was fermented with no SO2 in neutral barrels procured from Jeffrey Patterson (longtime winemaker at Mount Eden), and spent 10 months on the lees, for an ideal balance of creamy texture and perfectly polished acid. At 12.7% alcohol, this is the model of Santa Cruz Mountains Chardonnay, performing perfectly in its given site.

Jelks also loves the Enz Vineyard in San Benito, where he sources The 2017 Pope’s Smoke Grenache (13%), a wine that practically pulsates with a dark red-fruited acidity. “I didn’t want to do any stem inclusion, because that would raise the pH and I like the plentiful acid,” he explained, reiterating that he adds nothing to the grapes when he barrel ferments them.  The 2017 Dirt Squirt Pinot Noir from the Basor Vineyard (13%) is primarily Mount Eden clone, with abundant cranberry and raspberry flavors around its spicy, fleshy core, that gets a boost from 30% stem inclusion. This is superb, hands-off wine crafting.

Anyone who loves Riesling already knows Ryan Stirm: he’s practically synonymous with the grape. No wonder: his 2017 Wirz Vineyard Riesling is an utter delight, with perfect petrol aromatics and candied lychee on the palate. The 2018 Wirz Vineyard Rose is essentially Vitamin R, as Stirm refers to it, with a squeeze of red to give it color. It’s light and delicate, and works really nicely in the canned version, which his buddy Andrew Nelson cans at Companion. If you like Zin that can dance and get out of its own way, you’ll appreciate Stirm’s zippy 2017 Wirz Zin. It smells more like Grenache, with all its cheery cherry perfume. Make no mistake, though, although it can dance a gig, it still has that eternal Zin finish that doesn’t leave the building.

Companion Wines makes it easy for you to take wine to places where no glass is allowed, and partners, Andrew Nelson and Ryan Stirm, are happy to provide you with a solid sparkling Riesling or sparkly rose. They tap the talents of winemaker, Graham Tatomer, for the canned Gruner Veltliner, and their friend Gina Hildebrand, of Lady of the Sunshine winery, for their Savvy B, a pretty sassy and edgy take on Sauvignon Blanc from a biodynamically farmed vineyard in Edna Valley. Think of it this way: for $10 a can, you have half a bottle of wine, without the need for corkscrew or wineglass.

Madson Wines is the labor of love of viticulturists Kenny Swegles and Cole Thomas, who are producing some excellent wines from vineyards they manage, including the 2016 PM Staiger Vineyard Chardonnay (13%) from Boulder Creek, an own-rooted vineyard planted in 1988. Lean, focused and pleasingly apple-dominated, this wine conveys the butteriness of apple pie. Their 2017Anderson Valley Pinot Noir from the Zicherman Vineyard near Boonville, delivers generous pomegranate and blueberry pie, with a distinctive forest floor underpinning from the 100% whole cluster inclusion. The bomb, though, is the 2016 Madson Ascona Syrah, from a 2,500 ft. altitude vineyard on Skyline Boulevard, brimming with mountain savoriness, including a distinctive white pepper that wraps around the pomegranate, blueberry and plum.

Then, on to the two winemakers who have day jobs in the biz for major brands in the region, and have their own wines as a continuation of their chosen profession.

Assiduous Wines is the province of Keegan Mayo, who has been winemaking at Bargetto for three years now, after a stint at Testarossa. He sources fruit from known and handy sources, including Regan Vineyard where he gets Pinot Gris and Pinot Noir. The 2018 PG is lean, crisp and low alcohol (12.2%), perhaps aimed at Monterey Bay calamari or spot prawns. Showing his prowess for Pinot, is the 2017 Regan Pinot Noir, done in 25% new oak for 18 months, and showing really juicy notes of fresh cranberries and pomegranate, on a lithe and pleasing palate. His 2017 Malbec from Black Ridge Vineyard (Los Gatos) may be one of the best Malbec’s I’ve tasted this year. “We used to make Malbec from this vineyard when I was at Testarossa, and I hated to throw it into the (Mountain Select) blend!” It’s great that he gets to liberate this varietal so it can shine, and shine it does, with supple red and blue fruit, along with the classic cedar and tobacco.

Samuel Louis Smith has been in charge of winemaking at Morgan Vineyards (Monterey) for three years, since Gianni Abate left for Chalone. A Bakersfield native who went to UC Santa Barbara and has a love of cycling, Smith found himself lured to the romance of the wine business, as he cycled through beautiful vineyards in the Santa Rita Hills. He taps the Spear Vineyard in those same hills for a lovely 2017 Samuel Louis Smith Chardonnay that smacks of fresh apple and lime, showing great acid and tension, using only 20% new French oak. His 2017 Albatross Ridge Pinot Noir (from a ridge above Carmel Valley) exhibits incredible spice and grip, with a distinctive cranberry-orange core. Delightful. Smith really brings it home with the 2017 Sandstone Terrace Syrah from the Gali Vineyard in Watsonville, with huge blueberry and spice, a meaty wine showing the undeniable power of this varietal in cool, coastal climates.

Congratulations to all for putting on such a great event, filled with camaraderie,  education, revelation and enlightenment. And the chance to see—and taste—the Santa Cruz Mountains in a fresh new light.