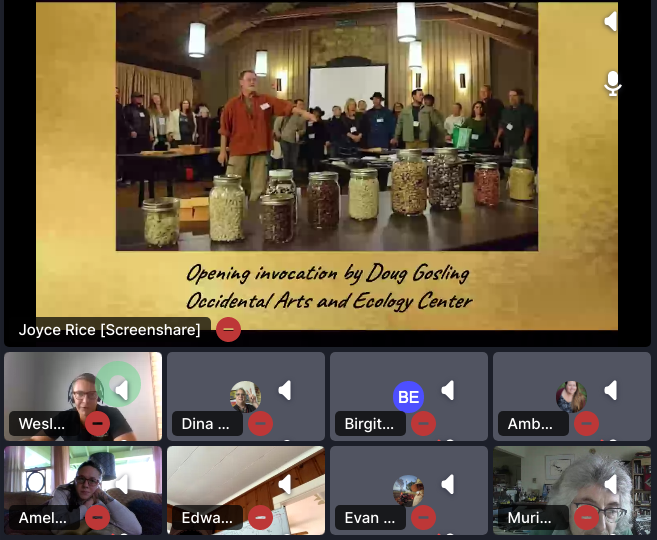 It got more powerful.

That’s not just me talking—from my kitchen, where I was learning the Hopin platform along with everyone else, clicking into more sessions than a brisk jog would’ve allowed on site, and feeling genuinely blown away by several keynote speeches. EcoFarm staffer Deborah Yashar, who has been attending in person since 2003 and has helped host it since 2014, also didn’t anticipate the voltage she experienced.

“I was delightfully surprised at the connective energy that seemed to be pulsing through the screen,” she says. “I did not expect this from a virtual conference but in some ways the way information and knowledge shared was three-fold. Isolated conversations about the presented topic were no longer isolated…everyone could witness them and partake in them if they chose to.”

And while EcoFarm always starts in mid-January, there was something a little different about this particular January. The opening keynote unfolded a few hours after Joe Biden and Kamala Harris were inaugurated Jan. 20, giving the theme of the 41st installment—“Reimagining Our Future”—new intensity.

Best-selling author, advocate and restaurant justice warrior Saru Jayaraman was all over it in the initial keynote. “There truly is an opportunity to reimagine everything,” she said. “Not just because of a new president, or a new Congress, but because the pandemic has forced us to rethink everything, [from] our health [to] how we interact to one another.”

With that in mind, here appear 16 examples of different efforts to reimagine the way things can be done from EcoFarm presenters, participants and vendors I encountered over three and a half days of remote conferencing:

Reimagining geography • A small but powerful detail led each speaker’s talk: Almost all of them identified their preferred pronoun (in a nod to LGBTQ rights) and cited their home city in ancestral terms (i.e. traditional Ohlone territory instead of Oakland).

Reimagining accountability • Jayaraman’s book Behind the Kitchen Door trained a bright spotlight on injustices happening in restaurant kitchens across the country. Now her new collection of stories Bite Back: People Taking On Corporate Food and Winning honors experts and activists addressing injustices in our food system, from corporate bullying to wage inequality to environmental destruction. Gerardo Reyes Chavez spoke at the first keynote with Jayaraman; he helps lead the Coalition of Immokalee Worker’s national Campaign for Fair Food that confronts farm labor exploitation with alliances between farmworkers and consumers that pressure major corporate buyers to help end that abuse. Its Fair Food Agreements with 14 multi-billion dollar food retailers including Walmart, McDonald’s and Subway have already won more humane farm labor standards and fairer wages, though there’s plenty more to be done. Help the cause at CIW’s website.

Reimagining office decor • I forget which speaker invoked the Caesar Chavez quote—“To make a great dream come true, the first requirement is a great capacity to dream; the second is persistence”—but it felt particularly timely given the fact Biden had just added a bust of Chavez to the Oval Office as EcoFarm was called to session.

Reimagining grass eating • With climate change not exactly mellowing out, one session looked into how helpful contract grazing can be as a fire management tool. The good people at Full Circle Wool shared 10 ways to support grazing, including getting involved in a Fire Safe Council; learning about your local Natural Resources Conservation Service (NRCS) and/or Resource Conservation District (RCD); shopping for California-raised food and fiber.

Reimagining respect for farmers • UCSF doctor and touring musician Dr. Rupa Mayra lives and works a small urban farm with her family. She started noticing her husband’s soil reports mirrored what she was seeing in her patient’s stool studies. That helped lead to a series of revelations, including how changes in gut biomes are causing ruthless inflammation-driven maladies like colon cancer and heart attack—and how greater support and appreciation for farmers can better equip them to steward our health. “We should treat farmers the way we treat our doctors,” she says. Many of her findings will figure in a forthcoming book she’s doing with Raj Patel (Stuffed and Starved) that’s now available for pre-order, Inflamed: Deep Medicine and the Anatomy of Injustice.

Reimagining sustainability • John Kempf of Advancing Eco Agriculture anchored a keynote that dug deeply into how soil nutrients can address all sorts of farm challenges while revolutionizing plant performance—and ultimately human health. “Nothing can be truly sustainable,” he said, “unless it sustains the sustainers.” In our ag system, he announced, we hold the keys to prevent all sorts of illness, including cancer. “I don’t place 100 percent of current health challenges in the agriculture sector,” he said. “However, agriculture is the foundational place.” One of his slides added something that Mayra echoed later: “Farmers contribute more to public health than doctors and hospitals. We have the capacity to prevent the cause of illness, rather than treat the symptoms.”

Reimagining camping • Yes, the popular Expo “pavilion” is a different experience without the finds to flip through in Bookshop Santa Cruz’ corner or smoked salmon to sample in Patagonia’s, but the fact that vendors showed up and made themselves available by video chat was cool. My favorite had to be a startup called Hipcamp, which takes the Airbnb concept and overlays it on farms and similar properties that range from 2 acres to 2,000 and host everything from from bare-bones camping to treehouses. Farmers and other landowners earn money hosting nature lovers. Hipcamp works to support those who care for the land, as its mission to get “more people out under the stars” gains momentum.

Reimagining prison landscaping • EcoFarm veterans will tell you one of the coolest things about the conference is bumping into other earthly stewards and learning about their projects. This year the online platform included a randomized meet-up carousel designed to simulate spontaneous networking. I came across two in the chatboxes that accompanied a pair of my sessions: 1) Applied Ecology, which does all sorts of habitat restoration work and has also pioneered a Sagebrush in Prisons Project that trains incarcerated adults in ecology as they cultivate native seedlings to be planted in recovering regions; and 2) CRT-Eco, a nonprofit that provides workshops for largely minority service workers designed to promote physical and mental mindfulness and prevent injuries and chronic disease. “There is more to life than work,” says program point person Elena Velez.

Reimagining homegrown • Zoom Out Mycology sells spawn to grow mushrooms like shiitake, oyster, and lions mane in small- to medium-sized operations in your home, which made them another one of my favorites from the Expo.

Reimagining produce shopping • One of the uplifting outcomes of the coronavirus pandemic for the farming community has been a deepening appreciation for locally grown fruits and vegetables. As part of a session called “CSA, Meet COVID-19!” several growers agreed it’s been a big boon for their farmers market and community-supported agriculture business. Farmer Melanie Cunningham noted one customer asked if she could pay for a whole year of CSAs in advance. She also added the heightened demand pushed her to be more creative with partners to include new offerings and to maximize production from her modest acreage. “Having that demand makes us better farmers,” she said.

Reimagining equity • One keynote led to breakout groups that challenged conference goers to consider what they can do to make their communities more equitable. One participant in my group noted that after attending seven farm conferences remotely this year, this was the first time she’d heard it discussed. “No farm conferences are doing this type of work,” she said, “in trying to wrap their brains and hearts around diversity, equality and inclusion.”

Reimagining stone fruit • New varieties are on the way, including plum-cherry hybrid “pluaries” by the name of Candy Heart, Sweet Treat and Flavor Punch. “One of the most delicious pieces of fruit you’re ever going to eat,” Leith Gardner said. Nectaplums are also real, with many different types under development, including a Spice Zee.

Reimagining food stamps • Through Supplemental Nutrition Assistance Program, or SNAP (formerly known as food stamps), participants can get more than food—they can buy seeds and starts to plant and grow their own. Unfortunately, some 2 million eligible families who qualify for those types of benefits aren’t signed up, even though families of four can receive up to $650/month in benefits.

Reimagining tractors • Down-home engineer Steve Heckeroth has been fighting to limit fossil fuel consequences since the first Earth Day (in 1970), working in architecture and design before turning to transportation and growing food. In Solectrac, he has developed high performance electric tractors that he hopes will replace diesel machines around the country.

Reimagining motivation • Diane Dempster was one of a number of luminaries honored with a Steward of Sustainable Agriculture Award (or Sustie) for her work pioneering organics in the Northwest. A quote she shared in receiving it stuck with me: ““Put love in your work, so we can all love the outcome.” Another quote that resonated both with the themes of EcoFarm and the challenges the world faces today came from Alfredo Vergara, who quoted William James. “Act as if what you do makes a difference,” he said. “It does.”

Reimagining vegan • Friday night featured a talk with James Beard Award-winning author Bryant Terry, whose relatively new book Vegetable Kingdom is as playful and enlightening as it is mouthwatering. He reinvents traditional Black staples with a flood of plant-based fusion, weaving in a wealth of African, Asian, Caribbean and American Southern flavors and pairing recipes with lively hip-hop, jazz, reggae, soul, R&B, or Afrobeats anthems. It’s hard to tour through his recipes without being inundated with inspiration.

Reimagining rebirth • The absence of late EcoFarm co-creator Amigo Bob Cantisano was felt deeply across the scope of the online gathering. More than 700 attended a special remembrance session Friday morning that I lingered in well after most left, long enough to hear his partner and session co-host Jennifer Bliss say, “I have a hard time hitting the end button.” But as farmer Dru Rivers said, “Bob’s religion was cover crops and compost”—in other words, he dedicated his vibrant life not to ends but to renewal and new beginnings. “Aqui estamos, aqui estaremos,” JSM Organics’ Javiar Zamora said as part of the remembrance. Here we are. Here we will be.