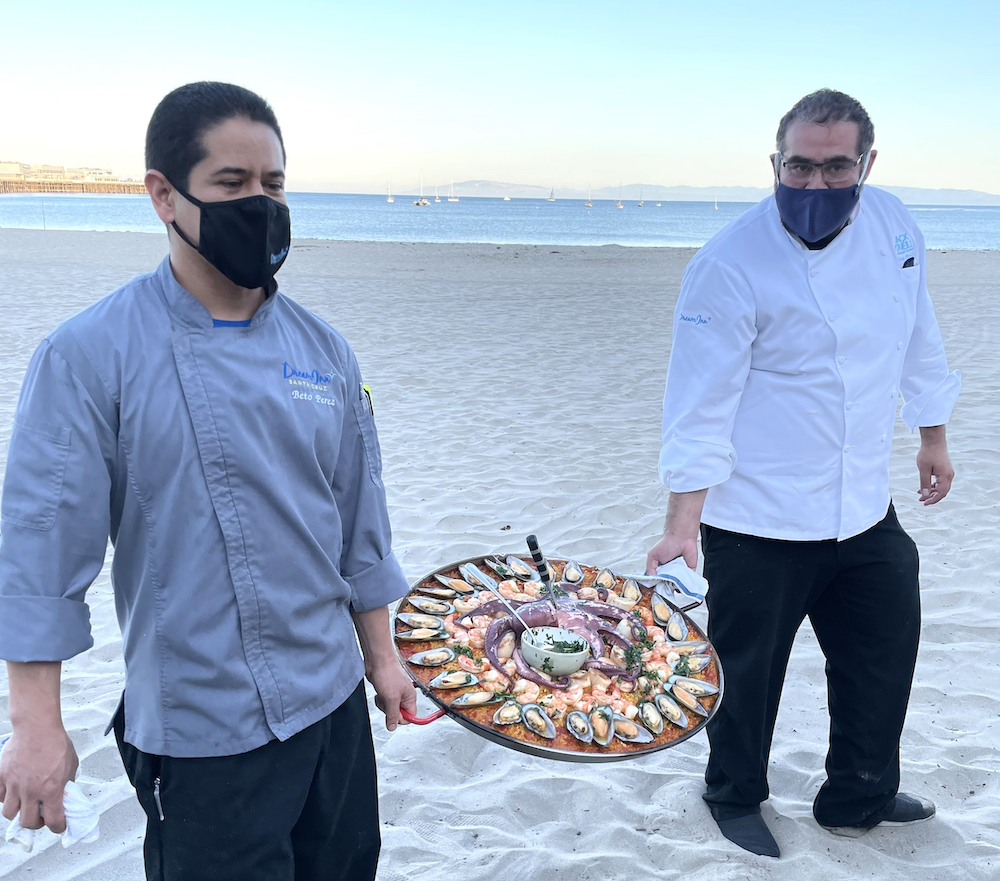 June 22, 2021 – Paella on the beach? That’s what chef Gus Trejo has in mind. He’s currently spending his first summer as exec chef at the Dream Inn in Santa Cruz and they’ve just obtained permission from the city to start holding group events on Cowell Beach in front of the hotel.

Trejo comes to Santa Cruz from Estéban Restaurant in Monterey and before that worked under chef Tim Wood at Carmel Valley Ranch, so he is well versed in local sourcing.

“Food just tastes better when it hasn’t been traveling on a truck for six days or hasn’t been sitting on a shelf wrapped in plastic,” Trejo told a group of journalists who gathered to try out the first beach dinner earlier this month.

The chef started at Dream Inn on Halloween night 2020 and has helped steer the hotel’s food program through pandemic restrictions, working at building up relationships with local farmers like Chris Laughlin of Sea to Sky Farm in Bonny Doon, as well as bringing in some of his favorite purveyors such as Swank Farms and Big Sur Salts.

Now that restrictions are lifted and hotel operations are returning to normal, Trejo and sales and marketing director Dan Smart have come up with a way to better utilize the Dream Inn’s privileged location. Beginning in September (when the city’s popular Junior Lifeguards program leaves the beach and kids head back to school) the hotel will be allowed to book feasts right on the sand.

For the try out dinner, Trejo prepared one of his signature paellas. There’s nothing better than paella eaten with your toes in the sand! Although he’s from San Diego, as a child the Trejo spent every summer at a family ranch in Portugal near the Spanish border—so he knows what he’s doing and he’s an expert at seafood.

The paella came topped with a stunning whole octopus and was bursting with plump shrimp and mussels. Roasted local vegetables and ribeye steaks rounded out the menu. For dessert, a selection of seasonal fruit pies provided a sweet finish.

Smart says beach feasts, like the one we enjoyed, will be ideal for corporate groups and family reunions.